Smartphones are killing us -- and destroying public life

Hey, you -- look up! Our iPhone addictions are wrecking public spaces and fraying the urban social fabric 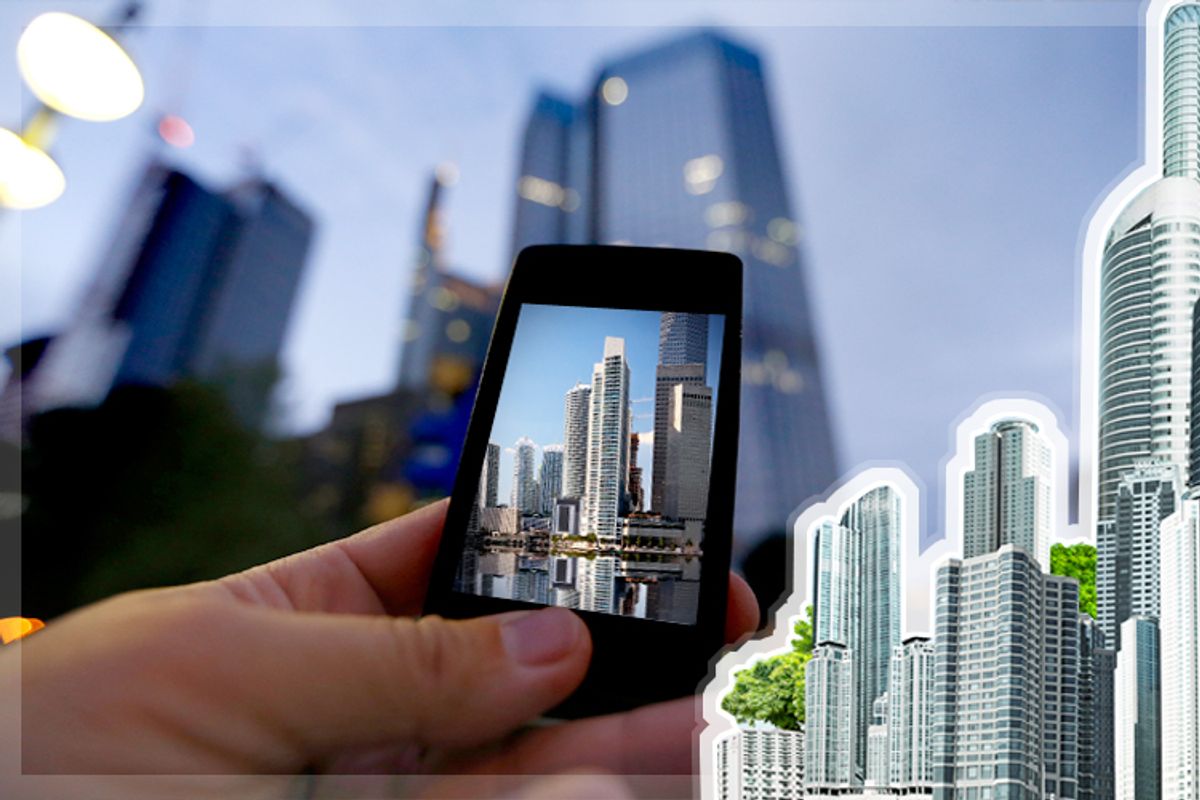 The host collects phones at the door of the dinner party. At a law firm, partners maintain a no-device policy at meetings. Each day, a fleet of vans assembles outside New York’s high schools, offering, for a small price, to store students’ contraband during the day. In situations where politeness and concentration are expected, backlash is mounting against our smartphones.

In public, of course, it’s a free country. It’s hard to think of a place beyond the sublime darkness of the movie theater where phone use is shunned, let alone regulated. (Even the cinematic exception is up for debate.) At restaurants, phones occupy that choice tablecloth real estate once reserved for a pack of cigarettes. In truly public space — on sidewalks, in parks, on buses and on trains — we move face down, our phones cradled like amulets.

No observer can fail to notice how deeply this development has changed urban life. A deft user can digitally enhance her experience of the city. She can study a map; discover an out-of-the-way restaurant; identify the trees that line the block and the architect who designed the building at the corner. She can photograph that building, share it with friends, and in doing so contribute her observations to a digital community. On her way to the bus (knowing just when it will arrive) she can report the existence of a pothole and check a local news blog.

It would be unfair to say this person isn’t engaged in the city; on the contrary, she may be more finely attuned to neighborhood history and happenings than her companions. But her awareness is secondhand: She misses the quirks and cues of the sidewalk ballet, fails to make eye contact, and limits her perception to a claustrophobic one-fifth of normal. Engrossed in the virtual, she really isn’t here with the rest of us.

Consider the case of a recent murder on a San Francisco train. On Sept. 23, in a crowded car, a man pulls a pistol from his jacket. In Vivian Ho’s words: “He raises the gun, pointing it across the aisle, before tucking it back against his side. He draws it out several more times, once using the hand holding the gun to wipe his nose. Dozens of passengers stand and sit just feet away — but none reacts. Their eyes, focused on smartphones and tablets, don’t lift until the gunman fires a bullet into the back of a San Francisco State student getting off the train.”

The incident is a powerful example of the sea change that public space has suffered in the age of hand-held computing. There are thousands of similar stories, less tragic, more common, that together sound the alarm for a new understanding of public space – one that accounts for the pervasiveness of glowing rectangles.

The glut of information technology separating us from our surroundings extends well beyond our pocket computers. “Never has distraction had such capacity to become total,” writes the urban theorist Malcolm McCullough in "Ambient Commons: Attention in the Age of Embodied Information." “Enclosed in cars, often in headphones, seldom in places where encounters are left to chance, often opting out of face-to-face meetings, and ever pursuing and being pursued by designed experiences, post-modern post urban city dwellers don't become dulled into retreat from public life; they grow up that way. The challenge is to reconnect.”

McCullough sees ambient information, from advertisements to the music in shops to Taxi TV, as an assault on our attention. But he’s no Luddite, and he’s not oblivious to the powerful ideas that spring from the shared ground of technology and urbanism, like Citizen Science, SeeClickFix or "Smart Cities.” What he’s calling for, in Ambient Commons, is “information environmentalism,” the idea that the proliferation of embedded information deserves attention and study, from planners, architects, politicians and especially from you and me.

Personal technology may be only a small part of McCullough’s interpretation of “peak distraction,” but for most people, the computer, tablet and phone are a focal point. What permanent connectivity does to our minds is the subject of great debate. What it does to public space is less often acknowledged. Essentially, smartphone users in public operate under the illusion that they are in private. They exist, in the words of two Israeli researchers, in “portable, private, personal territories.” Their memories of visited places are much worse than those of control subjects.

Our current strategy is to wire everything, everywhere — Wi-Fi in parks and subway tunnels; chargers in the squares bubbling with free electrical current like Roman drinking fountains. McCullough believes this freedom is irreversible. "To restrict information would be unacceptable,” he writes. “The communications rights of individuals and communities must be inalienable, insuppressible, and not for sale.” The tasks of filtering and decorum, he believes, fall to us as individuals.

Not everyone is so sure. Evgeny Morozov, reviewing McCullough’s book in the New Yorker, approvingly cites the Dutch writer Christoph Lindner’s argument for “slow spots” in cities. Morozov points out that the candy bar Kit Kat (“give me a break!”) has set up benches with Wi-Fi blockers in Amsterdam. Would we like to see such a thing occur on a larger scale, in a museum, park or in a neighborhood?

Of the three interwoven motivations for such regulations — danger, civility and health — the first has been the most effective. Just as 41 states rapidly banned texting while driving, there are rumblings of “texting while walking” bans in reaction to pedestrian fatalities. Last year, Fort Lee, N.J., made international news when it began issuing jaywalking tickets to errant, phone-in-hand pedestrians who had veered into traffic. Distracted walking bans have been proposed (with little success, so far) in Arkansas, Illinois, Utah, New York and Nevada. New York City paints “LOOK!” in its crosswalks.

In Japan, more than a dozen people fall off railway platforms while looking at their phones each year. Some pundits there have called for bans on texting while walking modeled after successful “smoking while walking” campaigns. Train station announcements remind commuters to look where they’re going, and even mobile phone companies have begun to educate users about the dangers of looking at a phone while walking.

But for all the talk of danger, it’s clear that the more frequent problem with “distracted walking” is that it’s annoying – and one of several uncivil side effects of smartphone growth. Thus we have the “phone stack” game, where participants compete not to use their phones, and the Guardian columnist who has pledged to almost bump into smartphone walkers, to teach ‘em a lesson. Blind people in Japan say they are being jostled like never before; a man in a Seattle restaurant took a break from his three companions to watch "Homeland" on his iPad. Some restaurants, bars and coffee shops have banned smartphones and computers for their corrosive social effects.

Anti-technology zoning for cognitive health – to protect us from our own worst instincts – is a more complex challenge. Ought urban parks, designed as restorative environments for a different age, be adapted to insulate visitors from the Internet as from noise, traffic and commerce?  The fact that you can address the connectivity problem yourself – just turn it off – doesn’t preclude the possibility of an enforced solution. Airlines turn off the cabin lights despite the existence of blinders; earplugs don't reduce the popularity of Amtrak’s Quiet Car. William Powers’ idea for digitally free “Walden Zones,” for example, has caught on in libraries – though because work, relaxation and distraction look so similar, the rules are hard to design. (A ready counter-argument: We are all so addicted to our media that withdrawal could be more stressful than blissful, buzzing distraction.)

Broadly speaking, any such regulations would require agreement that public computing has negative externalities — that your hand-held device is my problem.

McCullough is eager to situate these concerns in history, and refers to movements against invasive advertising, light pollution and smog. Morozov is particularly interested in the history and success of the anti-noise campaigners who reshaped the sound of the city.

But while it is obvious that light, noise and smoke corrupt darkness, silence and clean air, the consequences of smartphone use are far more opaque. What, exactly, does the man texting at the bar disrupt? Is the situation different if he is watching a violent movie or playing a visually arresting game? What does it mean to fellow patrons if his face is bathed in the steady glow of an e-book?

In the past, it has taken decades to pinpoint the external costs of other people’s activities. Though smoking was often considered a bother in the 19th century, it wasn’t until the 1920s that the aggravated parties coined the expression “secondhand smoke.” (All this far before any awareness of its health risks.)

It seems clear that there is such a thing as secondhand glow. It impedes our movement on busy sidewalks, breaks our concentration in movie theaters and libraries, and makes our public places as dull and private as phone booths. The question is what to do about it.