Jerry Stahl: Government has a "fascist-adjacent" devotion to business

The author of "Permanent Midnight" talks about Lou Reed, literature and what can still make him angry 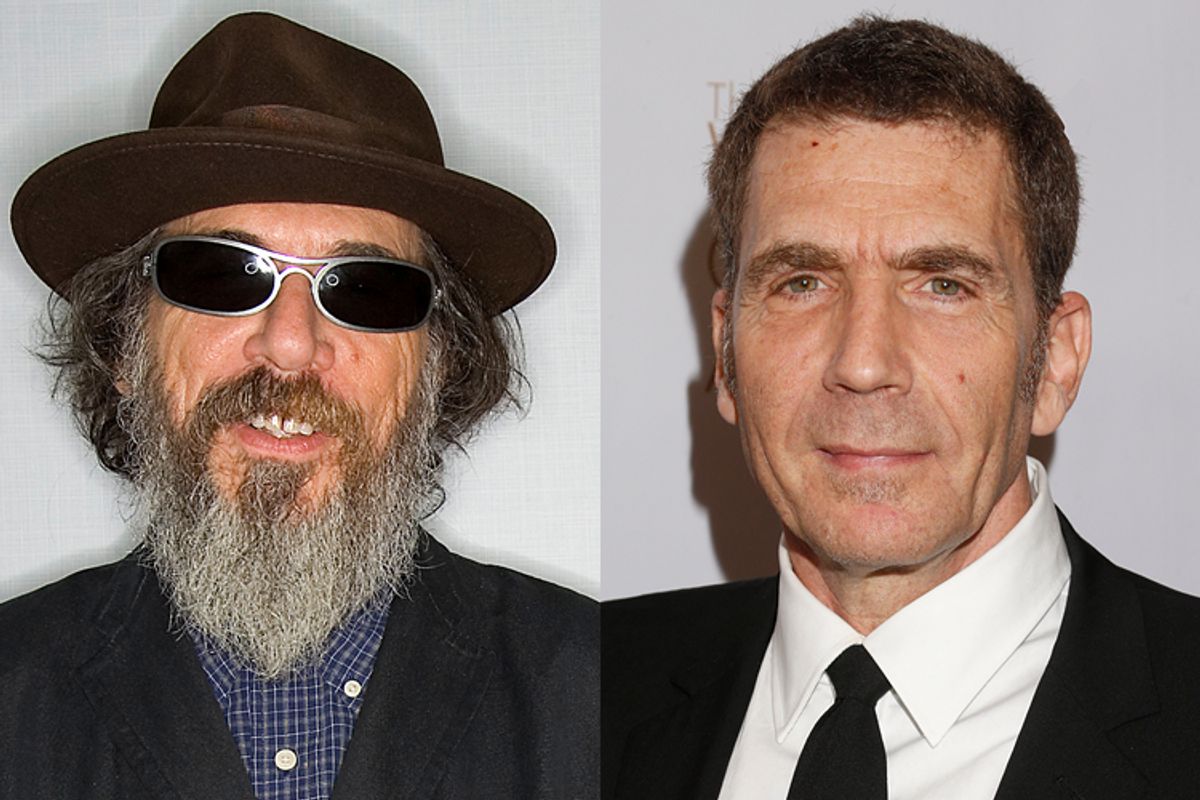 No one gets to see it all but Jerry Stahl has seen a lot of it. Best known for the addiction memoir "Permanent Midnight," later made into a movie starring Ben Stiller, Stahl's latest book is the novel "Happy Mutant Baby Pills," a biting look at big Pharma. He recently chatted with the writer and producer Larry Charles.

I don’t know how coded, but this book is autobiographical on a couple of fronts. First: I was the kind of kid who read the backs of cereal boxes, dying to be a writer, then basically grew up and wrote the backs of cereal boxes, along with sex toy advertisements, fake Penthouse Forum letters, and other prestige gigs. It was like an apprenticeship. In the same way, Lloyd, in the book, is a failed novelist who pays the rent writing side effects copy for Big Pharma commercials (he coined the term “anal leakage” – a side effects triumph), penning the content for Christian dating sites, etc. ... While he’s trying to be a writer he’s also got one foot in the criminal world. So he’s definitely some alternate universe version of me. Except, unlike Lloyd, I never killed anyone – that I know of.

Prior to writing the book – front No. 2, I took part in a drug trial at Cedars-Sinai Hospital for a new hepatitis C cure. (Hep C’s the ex-junkie curse – it’s why Lou Reed, in the end, had to get a new liver, which ultimately killed him.) Before starting, they told me the pills were so toxic, if my pregnant girlfriend so much as touched me while I was on them, our baby would be born polka dot with a Ron Perlman head. We’d have had to fuck in Hazmat suits. A situation which gave rise to Nora, the book’s other main character. Her plan is to get pregnant, then ingest every ruinous over- , under-  and beyond-the-counter toxin she can find. By way of protest against capitalism and its cancer-causing, DNA-savaging fallout, she will give birth to the most mutant baby ever seen.

Happily, our baby was born fine. Though in my research I discovered that human breast milk has been shown to contain toilet cleaner, benzene, paint thinner and lithium, among other things. On the plus side, I’m thinking – given the state of the world -- my kid might need some free lithium.

Explain the difference between writing for mediums such as TV and movies vs. novels.

Easy. If a novel sucks, or if it’s great, it’s all you. In TV and movies, there are always a busload of people wanting to change, cut or generally alter your vision of whatever the hell it is you’re trying to do. You know, “We love it, but could you make the  lead character a 9-year-old Chinese girl and set it in 3004?” Put differently, with a novel, you torture yourself; in show business, that job is outsourced to producers.

Does and can literature still play an important role in the society?

The implication here is that "society" constitutes some homogenous entity. But literature at the Sarah Palin end of the spectrum might be different from lit in the Glenn Greenwald wing. (Revelation versus Chris Hedges, Tom Clancy versus Tom Pynchon.) I’m more the Hedges and Pynchon school. I like to think that literature – at least the kind I love and try to create – can help with the struggle to not lose one’s shit, providing some kind of psycho-emotional relief to readers by describing people who have lost theirs. Not that I’m altruistic. But that’s just a side effect. The truth is, I write to get the voices out of my head. As to whether books change anything, I hear "Mein Kampf" turned some heads.

What changed in America that marginalized the American writer?

Has anything changed? I remember reading Stanley Elkin’s definition of an American writer, “He’s the guy, when the businessman next to him on a plane asks, ‘What do you do,’ and he says, ‘I’m a writer,’ the businessman asks his name and then says, ‘Never heard of you.’” Now, when so many people are just trying not to go under, reading anything longer than an email is a luxury. At the same time – paradoxically -- post-Internet, everybody’s a writer. That said, being out of the mainstream is not necessarily a bad thing. (Having a movie made of your life is a mixed blessing, from a writerly point of view ...) When you exist on the margins – cult status! – maybe you mean more to the person who reads you. Nobody’s running down the street screaming I just found this wild-ass writer, John Grisham! I remember, as a kid, when you discovered that cool album by the band only you and two friends knew about, it meant something. I’m not the Beatles. But maybe I’m that band.

Is there a country that still places literature in the center of their culture?

The only two I know are France and Ireland. When I landed in Dublin, the cab driver found out I was a writer and regaled me with a crash course on Flann O’Brian. Can you imagine an American cabbie talking your ear off about William Gaddis, or Flannery O’Connor? France, too – great place to be a writer. I’ve spent a lot of time over there.  My books get much more play in Paris than New York. Makes me feel like a jazz guy from the '50s – shunned at home, but hot to the French.

I read yesterday that France passed a law saying Amazon couldn’t offer free delivery, because it was putting independent bookstores out of business. Parisians love their bookstores. People can still sit at a cafe in Pigalle and be left alone to scribble in their notebooks all day. If they do that over here, it’s a laptop, and they’re writing a spec "Louie."

What makes you angry, both on a frivolous and global level?

Hard to pick one thing – but of late the delusional nature of the American psyche can get to me. The America is No. 1 insanity, as likely to be perpetrated by Chris Matthews as Sean Hannity. I mean, No. 1 at what? Domestic spying? Fascist-adjacent governmental devotion to banks and business? Stripping its citizens of dignity, hope and food stamps? Letting industry poison the water and air? (Though that title might to go China, too.) I get particularly angry – now that I have a baby in the house again – about drones. Don’t the people who keep blowing up grandmothers in Afghanistan and Yemen and God knows where else realize that, one of these days, those poor bastards are going to start sending drones in our direction? And if they’re as random and inaccurate as ours, it’s not going to be pretty.

Does or can anything make you happy anymore?

Fortunately, I destroyed my life early. Before 40, not to brag, I lost everything – health, family, money, respect, you name it. Come back from that, it’s all gravy. More or less. Maybe it’s a pretty low bar – but for most of my existence, life was something to endure, not enjoy. But strange things happen when you don’t die young. Like ending up grateful. Not because things are always good – but because you know how fucking bad they can be. And you’re alive to feel them.

People who have been to hell are the happiest people I know.

Do you care what people say about you when you're gone and whether you do or you don't, what do you think they'll say?

Remember that great story about Jerry Lewis? How he’d pretend to leave an attaché case in the office whenever he had a meeting, but it was really a tape recorder? He’d come back in 15 minutes, get the case he “forgot,” then listen to what the suits said about him. I sometimes wonder what expression Jerry wore on his face, listening to himself being crucified.

To answer your question, I was an outsider out of the gate. I grew up in a neighborhood where my old man was the only guy who wore a white shirt to work. I was the only Jew in a grade school of 800. I used to get beat up for killing Jesus, which I must have done in a blackout because I couldn’t remember doing it. The shell forms early. The worst you can imagine, I’ve probably heard. Plus which, after they make a movie of you, all bets are off. Once you’ve seen movie stars reenact the worst moments of your life, 9 feet high, you don’t need therapy.

What made you leave Pittsburgh? What brought you to Los Angeles?

The first words I remember consciously thinking are, “I want out of here.” I was out of Pittsburgh by 16. The way I got to L.A. – I was living in New York, trying to support myself writing, and took a job as humor editor for Hustler, where I had to write gag copy for genitalia-shaped fruits and vegetables folks mailed in from the Midwest. I took the job because I knew Hustler was moving from Columbus – where I lived in a YMCA for three months – to Los Angeles. I had a bit of a drug problem in New York, so I thought moving to L.A. would help. At least that was the idea …

You have been so revealing both in your novels and journalism. Is there anything people would be shocked to find out about you?

Yes. Don’t spread it around, but I feel like the luckiest man alive. I write the books I want to write, I’m not in prison, I live with a smart, beautiful woman, I’ve got an 18-month-old baby girl and a daughter in her 20s who’s one of the funniest people I know. I’m friends with some of the most creative people on the planet, I get to sleep indoors, and I no longer secretly hope that every plane I step onto will crash. Anything more would be greedy. Square is the last frontier.