Joel Osteen's gay problem: The religious right is history if he can't solve it

Evangelicals need to tone down their views to stay relevant. The slick Houston pastor is showing them how it's done 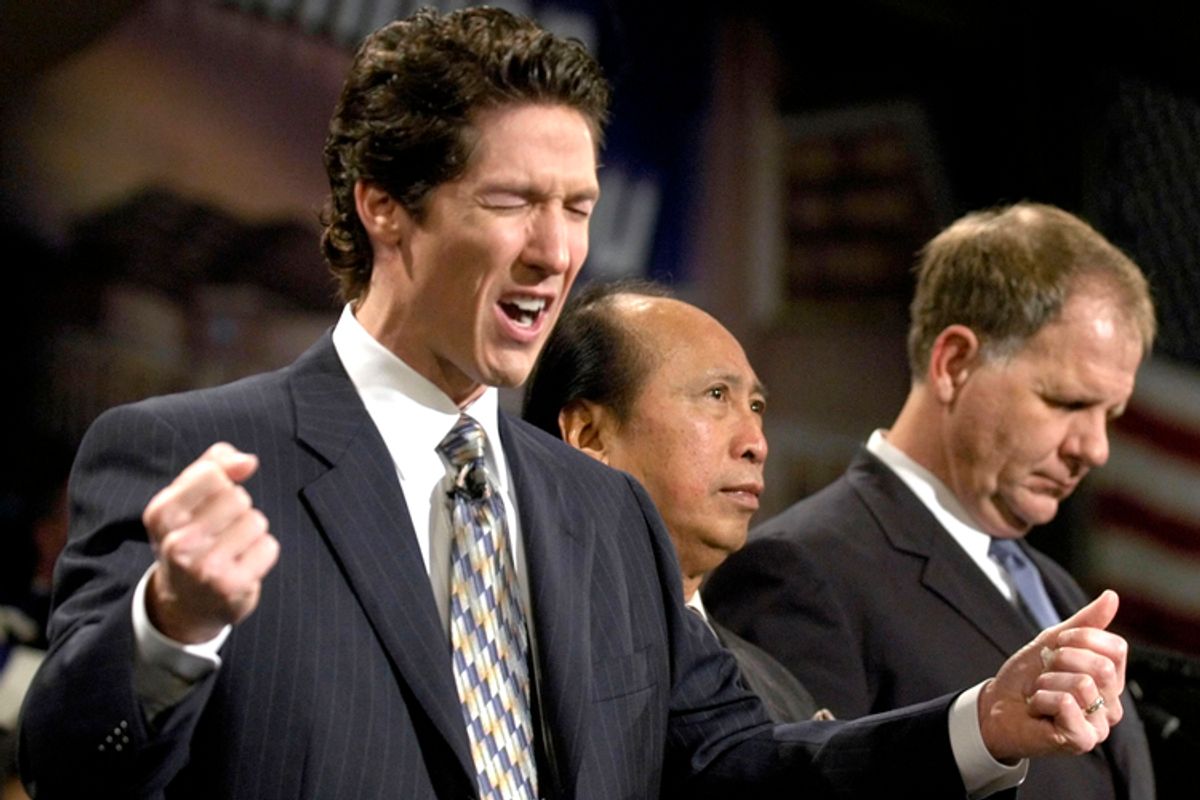 Joel Osteen has a problem, one that all Evangelicals in the U.S. are facing. The anti-gay position of mainstream Christianity has fallen out of favor with the public. Every reputable poll currently shows uncontested majority support for gay marriage. And the cultural shift happened more quickly than the churches can follow.

The Huffington Post’s Josh Zepps recently asked Osteen about this passage from his new book, “Break Out: 5 Keys to Go Beyond Your Barrier and Live an Extraordinary Life”: "It doesn't matter who likes you or doesn't like you, all that matters is that God likes you. He accepts you, he approves of you."

Zepps wanted to know if this included gay folks. “Absolutely,” Osteen offered without missing a beat. Evangelicals are notoriously tricky on the subject. It's common theology to claim that God accepts absolutely everyone because being gay is viewed as an affliction, not an identity. What makes Osteen's statement so unusual is his claim that God “approves” of gay folks.

The Texas megachurch pastor has always been relatively soft on the issue compared to his colleagues, notably the Evangelical behemoth Southern Baptist Convention. In the past, Osteen at the very least claimed homosexuality was unacceptable. He told  Fox News' Chris Wallace in 2012, "I believe that Scripture says that being gay is a sin, but every time I say that, Chris, I get people saying, 'You're a gay hater.'”

Osteen is quite a bit more slippery on the issue than his straightforward answer to Wallace would imply. In the same interview, Osteen immediately followed his anti-gay pronouncement by saying, “Gays are some of the nicest, kindest, most loving people in the world.” Osteen never says a bad word about LGBT individuals without offering some sort of olive branch afterward, often a condescending one. In a particularly weird moment with CNN's Piers Morgan, he even professed a love of Lady Gaga while his wife prefers Madonna.

Sometimes, Osteen drops the anti-gay facade entirely. In Boston, I once witnessed him personally intervene during a 2011 stop on his “Night of Hope” tour. The decidedly apolitical touring event is a mixture of top-notch live music and inspirational sermons by the Osteen family. During the proceedings, local ministers are invited to offer blessings. One pastor offered a thinly veiled attack on LGBT individuals by rambling on in gendered language about stable heterosexual families.

Osteen rushed the stage claiming God had laid something on his own heart. He proceeded to bless “all families and those we love,” curiously imploring god to help "every single person to find someone to love." The husband/wife dichotomy of the previous minister had just been passive-aggressively knocked to the floor.

Some Evangelical church leaders are already going the full distance and embracing change. The controversial minister Rob Bell, also a multiple New York Times bestselling author, announced full support for marriage equality earlier this year. But he didn't end with the endorsement. He pointedly criticized  the Evangelical church for its role in anti-gay discourse: “I think we are witnessing the death of a particular subculture that doesn't work. I think there is a very narrow, politically intertwined, culturally ghettoized, Evangelical subculture that was told, ‘We're gonna change the thing,’ and they haven't … And we have supported policies and ways of viewing the world that are actually destructive. And we've done it in the name of God and we need to repent.” The Evangelical Lutheran Church also made history this year by ordaining its first openly gay bishop to a six-year term in May. Many Presbyterian congregations in the U.S. also welcome LGBT parishioners and leaders.

The anti-gay position is becoming increasingly problematic in churches given support for LGBT equality among young people, even including white Evangelicals. Ministers are being forced to either embrace a dying ideology or risk ejection from their churches. The “because God says so” answers derived from the Bible's handful of homophobic passages are headed the way of biblical slavery defenses, and young Evangelicals aren't buying. (It's also of note that the nation's largest Evangelical denomination, the previously mentioned SBC, was originally formed to protect the rights of slaveholders. They're sorry now.

Complicating matters further is Catholicism's recent tonal shift on LGBT issues, which could create a ripple effect throughout the Christian world. Pope Francis made Christians around the world do a double-take when he claimed they were “obsessed” with gay people and needed to get over it, even going so far as to muse, “"Who am I to judge a gay person of goodwill who seeks the Lord?"

It won't be surprising when Joel Osteen, along with the rest of the Evangelical community, announces an Obama-style evolution on the issue. While some denominations will hold onto existing prejudice until the bitter end, most are likely headed the way of the Evangelical Lutherans. Until then, many Evangelicals across the nation will be forced into an uncomfortable gray area as church leaders furiously argue over an issue the rest of the country already decided.