The writer tells her story as if she were a golem, a mysterious creature of Jewish myth 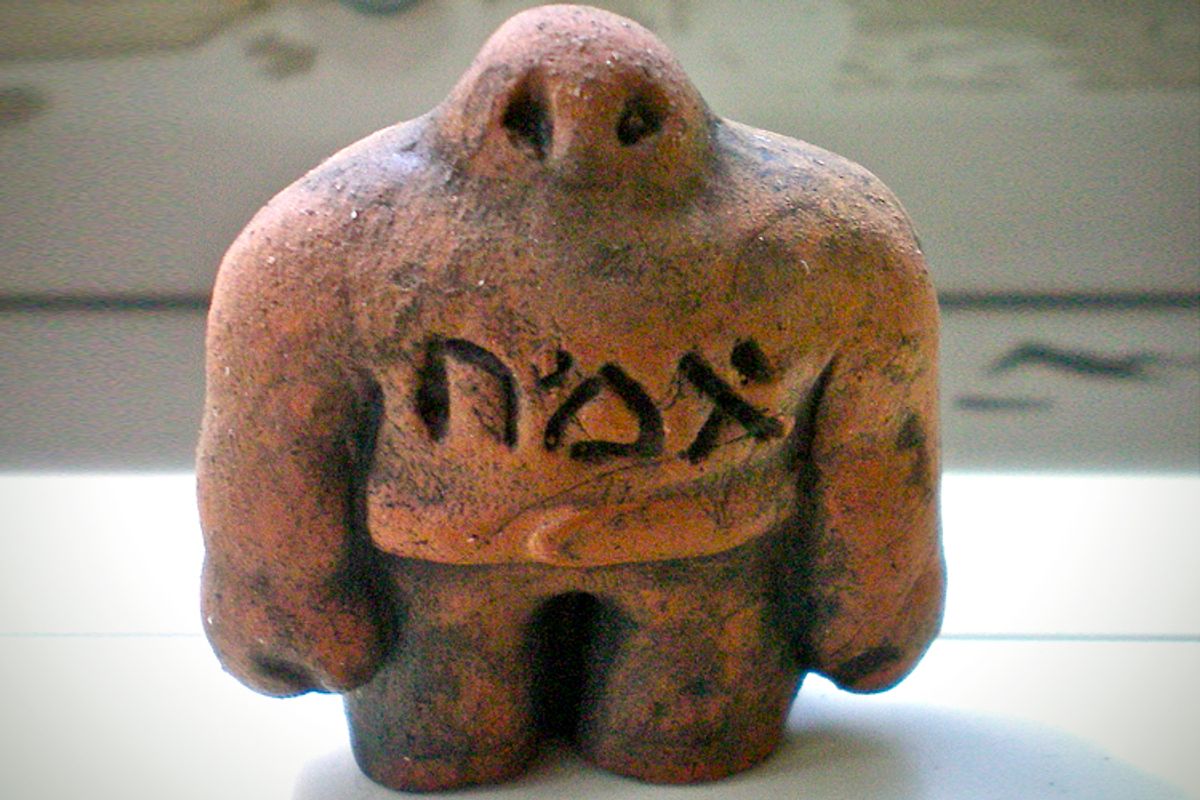 Excerpted from "Growing Up Golem."

"Growing Up Golem: Learning to Survive My Mother, Brooklyn, and Some Really Bad Dates" is a memoir of Donna Minkowitz's real life, but written as though she were a golem -- a magical clay servant-creature out of Jewish legend. Frustrated by the debate over James Frey and inaccuracies in memoir, Minkowitz decided to write one that was "87% true," with the remaining 13 percent, material that could not possibly be true because it was physically impossible. For example, the assertion that she is a golem created by her mother — a wildly domineering person who did, in fact, in real life tell Minkowitz and her sisters that she could do powerful Jewish magic.

My mother loved to make things. One day, when I was thirty-two, my mother created a giant, half-lifesize doll that looked just like me. (This, reader, is absolutely true.) It had yarn hair the same color and kink as mine, and real corduroy pants just like the ones I wear. My mother called it the Dyke Donna doll. (Mom was very pro-gay and lesbian, so she always felt very happy using words like "dyke.") The doll wore a stripey red shirt like a circus performer, along with real, removable, bright red booties made of felt, and extravagantly long curling eyelashes that my mother drew in by hand, quite lovingly. It had big red apple blush-marks on its cheeks, like Pinocchio as I have always seen him drawn. It stood a discomfiting three feet tall (I myself am only five feet two). My mother gave it to me as her gift, to keep in my tiny apartment. I had to keep it under my bed because I couldn’t bear to see it sitting in my chair. But I felt like I was hiding a child away there, without food or anyone to talk to.

A few years after the Dyke Donna doll appeared, my arms broke. (This, also, is true.) I don’t mean that their bones broke -- I’ve never had a broken bone -- but that my arms’ capacity as limbs, their functionality, coherence, suddenly ended. It was as though my hands had simply stopped being hands. They began to hurt so badly that I didn't want to do anything with them, because that only made them hurt more.

It hurt, that March it started, in my upper back, shoulders, forearms, wrists, hands and neck. Sometimes even my head, by means of a process I couldn’t begin to comprehend. Sometimes it burned, as though hot metal were in my shoulders. The hands were the worst, with knives sticking in the palms. I had a sensation of spears through the wrists. Had I suddenly become a Christian martyr? But the pain wasn’t even agreeably sexual, as it might have been if I’d turned into Saint Sebastian. It was impossible to aestheticize it without - begging your pardon- throwing up. The backs of my hands felt as though they were being repeatedly forced to move through a basin full of tiny, crushed metal balls, like in some Star Trek punishment from a newly-contacted planet.

My first book had come out -- to poor sales, although my editor had said the book would make me "the next Susan Faludi." Right before that, my therapist had dumped me after 12 years. "I've just realized that this isn't working," she said. Before that I’d left the Village Voice, my sole and tightly-gripped foothold in the writing world, because they had promised to make me an official, salaried staff writer and had gone back on it. (This was the good Village Voice of years ago, reader - pardon me for saying so! - not the current one.) Me, I had slipped into the Voice at the age of twenty-two and snuck, wormed, even stolen my way into writing for them. Why else would the paper I believed in more than any other publication in the country publish me? I wasn’t a real person, and I knew it. I have always been a makeshift, artificial person, like a scary manikin or a ventriloquist’s dummy, and I have always known I would be found out someday and punished for my evil dissimulation.

I have known I was a magical being, hand-crafted rather than born, from my earliest days. I’m not sure when I first found out, but it goes back at least to the time my mother, when I was four, began telling me and my sisters that she herself could perform magic, could make us do whatever she wanted to, like puppets. She also could tell whatever we were thinking.

My great-grandmother, a Romanian Jew, knew the "gypsy signs” that could tell you what was about to happen -- say, by looking at a frozen tree or a dead animal found by the river, and other potent pagan peasant magics that she taught my mother. My great-grandfather, a Jew from Austria, taught my mom wild Hasidic magics that he’d quietly mined from kabbalah and Martin Buber.

My mother was an extraordinarily -- at times revoltingly -- creative person, so it was no great stretch to believe she had shaped me like a golem or a living toy, embedded with unnatural life-force like a hobgoblin conjured from a stale half-brownie and a brittle, faded page or two of Keats or Shelley.

Have you ever heard of golems? Oh goyische or unmystical, read here: golems are artificial persons that learned sixteenth century rabbis made out of wet clay, to do everything their makers told them to, and to attack the people who were lynching Jews all over Eastern Europe. They were all eventually snuffed out by their creators, except me. I survived my mother.

My mother added a few special items to the clay that she’d begun with, no doubt because she wanted to be fancy. I had polyurethane in me, I was sure, and psychically potent bits of tin and panty and old paper that she’d discovered at garage sales and a vintage store. Some paint-encrusted nails, chipped tiny screws. Dirty rags that she did not wash, so that their previous owners’ human perfumes might waft through me and provide a power of their own. A few crumbs of wet muffin. I have tried for years to find out exactly what she assembled on her kitchen floor before she said that ridiculous mix of Hebrew and Coptic words. Even now, almost everything I’ve said is guesswork. (Did she cut her fingernails at least to make some protein and collagen to go into me??)

It was the 1960s, generally too early for cybernetics, but my mother was a brilliant woman, and she may have put an early self-aware chip in me.

Golems (and robots) are but two species of our kind, of course. Certain rocks and springs have been galvanized (for eons) with a painful awareness, and there are young girls (and boys) imprisoned in eleven-inch Barbie dolls, living spirits imprisoned in bottle caps, baseball and tarot cards smarting and throbbing inside locked-up collections. Puppets and toys created far, far realer than they should be. Trees twisted with the force of something alien inside them. We are all over the world, we half-human sad, impregnated, lonely things, sung into life by magicians and pallid Hasids and evil PhDs who wanted to try and see -- just try and see! they had wild hopes -- if they could reproduce themselves without a partner.

The alchemists made their own little people out of chicken eggs mixed with human blood or sperm, bits of skin, occasionally animal hair or feathers. Sometimes dung (for who has not wished, at least once in their lives, to create a world out of their dung?) Other makers formed their creatures out of wood, or straw, or plastic that was enchanted so that it could think on its own, walk about, and have wishes.

I was one of these subtly manufactured little persons, one that canny old artist my mother had made, and I found her work in the stool-like shaping of myself -- oh mother, forgive me! -- disgusting.

Excerpted from "Growing Up Golem: How I survived my mother, Brooklyn and some really bad dates" by Donna Minkowitz. Copyright 2013. Riverdale Avenue Books. All Rights Reserved.