NFL scandal shows bullying can happen to anyone

And Jonathan Martin deserves credit for not putting up with it 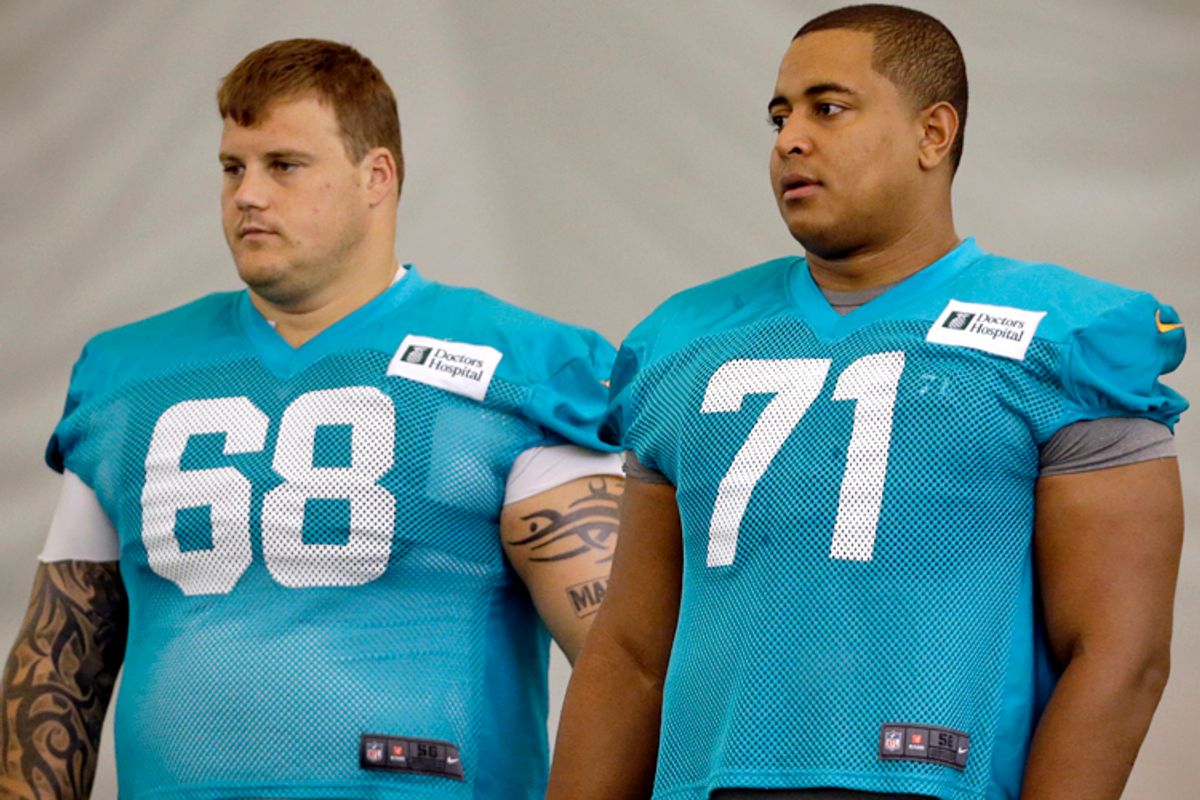 It sounds like a story from a schoolyard. And in fact, when Miami Dolphins head coach talked about it this week, he did so first in the language of a father of two young children. "When they walk in those doors, I have a certain expectations," he said. "That the administration, the teachers, the staff are going to create a safe atmosphere where my children can learn and develop as people." But this isn't a schoolyard. This is the high profile, big money world of the NFL.

In a surprise move last week, the Dolphins' offensive tackle Jonathan Martin went on indefinite leave to get help for "emotional issues" – a departure that led to a swirl of rumors about the cause. In a statement on Sunday, the team said quite specifically, "The notion of bullying is based on speculation and has not been presented to us as a concern from Jonathan or anyone else internally… Our primary concern for Jonathan is his overall health and well-being." But later that same day, it issued a very different statement, announcing it had suspended guard Richie Incognito for detrimental conduct, and saying, "We received notification today from Jonathan's representation about allegations of player misconduct… We believe in maintaining a culture of respect for one another, and as a result we believe this decision is in the best interest of the organization at this time.... We will continue to work with the league on this matter." The NFL's Albert Breer reports that Mike Pouncey may also be involved in the investigation.

According to Breer, the NFL has heard voicemails from Incognito telling Martin, "Hey, wassup, you half [expletive] piece of [expletive]. I saw you on Twitter, you been training 10 weeks. I'll [expletive] in your [expletive] mouth. I'm gonna slap your [expletive] mouth, I'm gonna slap your real mother across the face (laughter). [Expletive] you, you're still a rookie. I'll kill you." There are also allegedly texts from Incognito to Martin that "included derogatory terms referring to the female anatomy and sexual orientation."  Other teammates have allegedly been involved as well. FoxSports.com's Jay Glazer reported this week that "Some of his teammates got up from a lunch table as a joke when Martin sat down" -- a psychological tactic most bullies abandon around the seventh grade.

Incognito, who was voted the NFL's "dirtiest player" by Sporting News, is no stranger to controversy. The 30 year-old had a reputation for fighting back when he was a freshman at Nebraska eleven years ago.  He was eventually suspended from the team and transferred to Oregon -- and was removed from its team after one week. In 2009, he was benched from the Rams for his explosive behavior during a game.

Yet despite Incognito's track record, it's perhaps unsurprising that the onus of accountability has in many circles landed on Incognito but on Martin. In the macho world of professional sports, what kind of man lets a little racist aggression get to him?  Sports Illustrated's Jim Trotter reports that "NFL personnel people and active and former players… believe Martin handled the situation poorly by allowing it to spill out of the locker room and into the public." A personnel member told SI, "I think Jonathan Martin is a weak person. If Incognito did offend him racially, that's something you have to handle as a man! Mike Pouncey was a rookie at one point while Incognito was there and you never heard any complaints from him. There's no other way to put it, other than him being sofTTT!" Another added, "Guys are going to be guys, if you know what I mean. I'm sure there are some instances of 'taking things too far,' but that happens everywhere. You handle it in house -- fight, handle it on the field, joke about it, etc -- and keep it moving." And another said, "Instead of being a man and confronting him, [Martin] acted like a coward and told like a kid." And former Dolphins linebacker Channing Crowder told CNN Monday that the NFL is "a bunch of testosterone-filled alpha males who are trying to find their place on the totem pole."

Yes, the NFL is not the DAR. But there's a difference between healthy teasing and competition and being an abusive jackass. There's a difference between hazing and hate crime. You can't "maintain a culture of respect" when you simultaneously have members within in it who believe that the appropriate response to racist intimidation is silence and acceptance. No one should be expected to put up with some cretin's reprehensible behavior. And it takes a real man to say he won't accept it as the price of playing the game.