The primary problem with “Double Down” is not that it's gossipy trash!

Stop pretending these stories actually had any meaningful effect on the election, and just admit what it really is 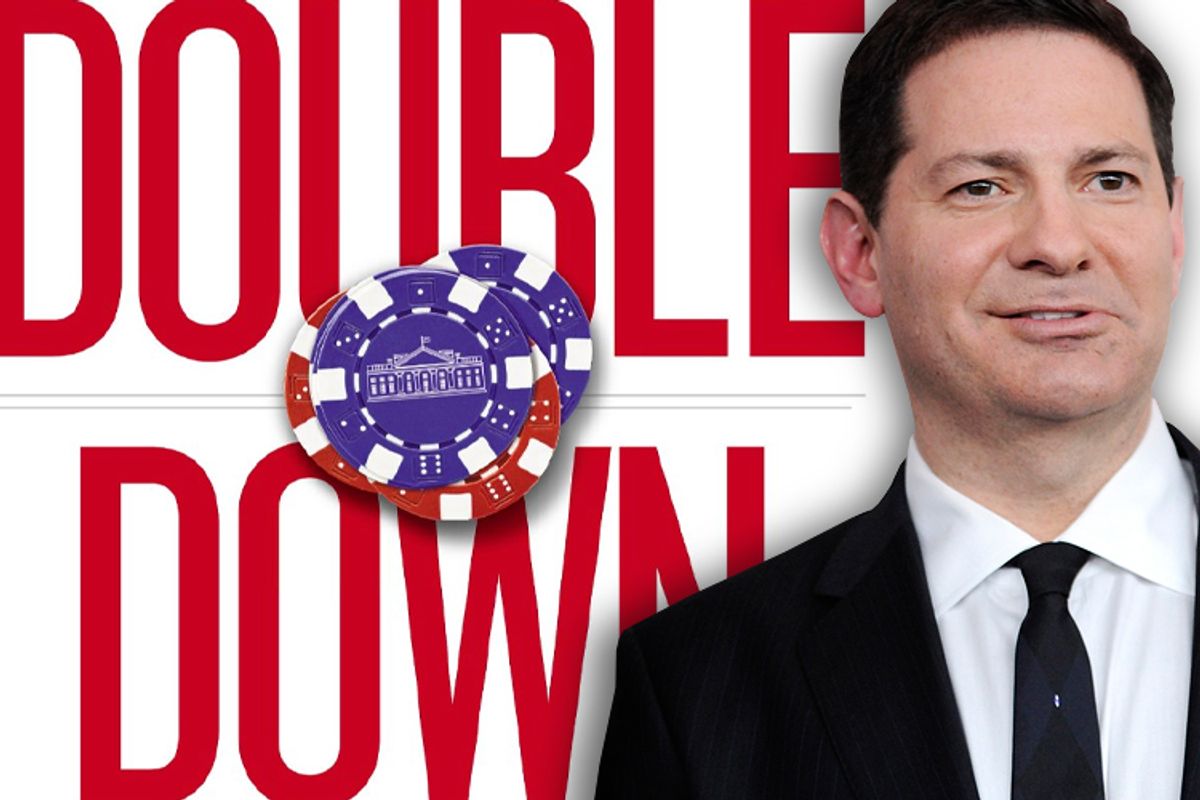 There is a new book out today about the 2012 presidential election, by reporters Mark Halperin and John Heilemann, the authors of "Game Change." The book is called "Double Down: Game Change 2012." Its authors have been promoting the book heavily, and the book is billed, like its predecessor, as the inside story of the presidential race, a peek behind the curtain at the previously unknown events that led to the reelection of Barack Obama. It's not that. It's a bunch of gossipy stories about politicians and people who run campaigns. Which is fine. Let's just stop pretending it's a different thing, please?

The only thing wrong with these "Game Change" books, besides the meaningless cliché titles, horrific prose, virulent sexism, heavy reliance on and implicit endorsement of the viewpoints and biases of plainly self-interested anonymous sources -- OK, the primary problem with these "Game Change" books, then -- is that people take them seriously. News anchors and pundits tell everyone that these books explain how or why a politician won or lost an election, or how they nearly lost. These books tell funny stories about famous people.

Here are some of the reasons why Barack Obama won reelection: because the Republican Party and conservative ideas are unpopular, because the economy was improving and the president's approval ratings were decent, because incumbents win more often than not, and because his campaign was better at identifying, motivating and turning out voters. Here are some things that had very little to do with the president's victory: His rebound performance in the second debate, Clint Eastwood talking to a chair, and his ability to tolerate golfing with Bill Clinton.

Newspapers, thankfully, generally obtain these sorts of books before publication and print all the good/juicy/new bits, so you don't have to buy the whole book. Thanks to these reports, we know, basically, what new or new-ish information "Double Down" contains.

Chris Christie didn't vet well. Most of the reasons Chris Christie was considered a risky choice as a running mate were already publicly known, even if national Democrats have done their best to let him slide on all of them since he entered electoral politics. His brother Todd's problems with the SEC, and the mysterious fact that he wasn't indicted when 15 of his colleagues were, has been public for years. Also previously reported: the defamation lawsuit Christie settled, and his time as a lobbyist for the securities industry. If this is news to you, blame the New Jersey Democratic Party, I guess.

Mitt Romney is a dick sometimes. Romney was real mean about Christie's weight, because Romney is a known and documented bully.

Obama hates debates. Yes, we saw that. Thankfully, the first debate didn't imperil his campaign and the second debate didn't rescue it.

Jon Huntsman Sr. was Harry Reid's source. This is a fun, juicy detail -- one that Huntsman has strenuously denied -- that doesn't matter, at all, unless you think Reid's hilarious, totally unsubstantiated attack line really made the difference last November. Still, it's always fun to read about how much the Huntsmans and the Romneys detest each other.

The Biden/Clinton switch was real! Wow! Shocking! And a real vindication for all the pundits who insisted this was on the table! Except, no, it wasn't. It wasn't a real thing. It was Bill Daley -- not remotely an Obama "insider" despite his then-prestigious title -- wishing for it to be a thing, and then polling it, and then getting shot down by people who are smarter than him. It wasn't ever going to happen and it wasn't ever seriously considered by anyone in a position of authority in the Obama campaign. This book doesn't change that.

So those are some of the major "scooplets" reported in this long, expensive, hardcover book with the massive publicity campaign and the already forthcoming made-for-HBO TV movie that probably won't be as popular as the last one because it won't be able to make fun of Sarah Palin. And what do they amount to, exactly? Practically nothing that had any real effect on the outcome of the last election, unless you are one of those people who believe that debates win elections. (Not even Halperin and Heilemann appear to believe that, as they write, in an aside, that Kerry won all three in 2004.)

What you have is a load of information that you may find entertaining if you care about politicians and their teams as celebrities. It is a collection of funny and embarrassing stories about famous people, mainly, except it is a collection of funny and entertaining stories about famous people that is convinced that it's very important and monumental. The proper model for these books shouldn't be "The Making of the President 1960," or "What It Takes," it should be "Live From New York," the endlessly entertaining oral history of "Saturday Night Live" by Tom Shales and James Andrew Miller. Or the ESPN book by the same authors.

Obviously the "oral history" method doesn't quite work when nearly all of your sources want to remain anonymous as they trash their former and probably future colleagues, and you grant them anonymity because these sources promise to give you some meaningless but hopefully entertaining morsels of gossip or one-sided recollections of conversations. But there are plenty of other, better models for this sort of book in entertainment journalism. Look at Bill Carter's two amazingly reported looks at the late-night wars, "The Late Shift" and "The War for Late Night." Or "Hammer of the Gods," the classic Led Zeppelin biography that has been strongly criticized by its subjects for relying too heavily on supposedly unreliable and biased sources -- just like the "Game Change" books! (And Woodward books!)

All of those books are, first and foremost, fun, because they present famous people we love or loathe in embarrassing and unflattering lights, and tell stories about these famous people behaving badly. Which is the entire point of this form of journalism. Except in politics, because the subjects have or are campaigning to obtain the power to make war and reshape nations, everyone thinks they have to write very portentously about What This Trivial Story Meant for the Country.

There's obviously only so much you can do to make it fun when your material is "Mitt Romney reads and enjoys a New Yorker article about Paul Ryan," but I will be generous to Halperin and Heilemann and say that they sometimes seem to grasp, if not quite embrace, that they are just writing trashy tell-alls. There is no excuse, though, for the likes of "Morning Joe" and the "Today" show and the entire rest of the professional political media industry to pretend that this stuff is actual news and not meaningless dish.