The disgraced hero remains creepy and clueless in Alex Gibney's "The Armstrong Lie," but we all enabled his fiction 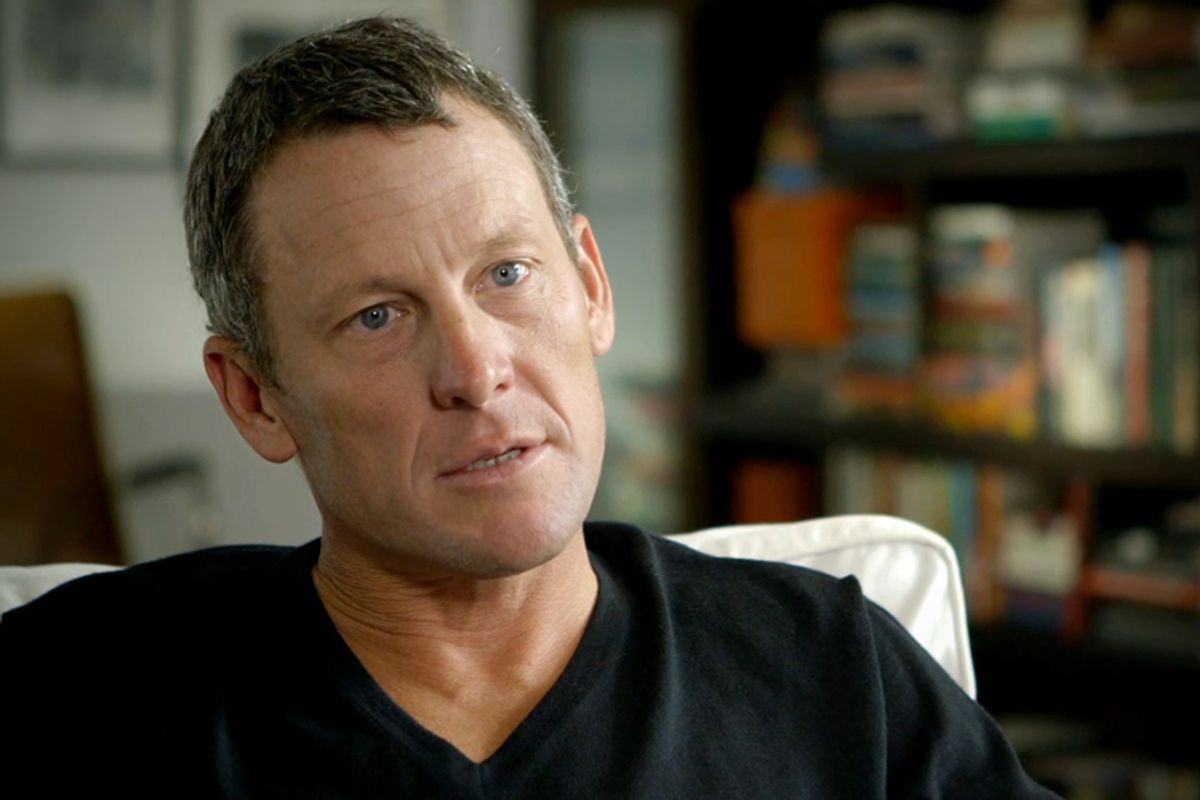 Lance Armstrong went back to the scene of the crime, like a crazed killer in a bad movie, and got caught. If he feels genuine regret about anything, it’s about that. Armstrong said as much to Oprah Winfrey, during the TV interview last winter when he embraced the last-ditch, trapped-rat tactic of telling the truth, or at least some of it. If he hadn’t made a comeback at the Tour de France in 2009, Armstrong told Oprah, “We wouldn’t be sitting here right now.”

That’s exactly the degree of self-knowledge and self-accusation the disgraced hero can manage, as we see repeatedly in Alex Gibney’s tormented documentary “The Armstrong Lie.” Armstrong is smart enough to detect a certain self-defeating arrogance in himself: His “dumb ass” ignored the symptoms of testicular cancer until it was almost too late, he tells Gibney at one point, and his dumb ass also tried to reconquer the world’s most famous bicycle race, four years after its organizers thought they were finally rid of him. In other words, Armstrong judges his own tactics as harshly as necessary. But it would never occur to him to question his strategy, which has always been to win at all costs.

There’s no doubt that Lance Armstrong is an important and symbolic figure of our age, one who will long be remembered in the annals of sports and culture. But he's not that interesting of a guy, and the more you listen to him the more boring he gets, which may explain why a documentary about him turns into a postmodern text about its own making and about its director. Armstrong’s story is fascinating, and the question of how to understand and evaluate it is immensely complicated. But once you understand that he has the finely honed cunning of a predator, and will say and do whatever gains him an advantage in any given situation, then hearing him talk stops being useful. I have no idea whether Armstrong is still lying when he tells Gibney that his blood transfusion during the 2000 Tour de France had nothing to do with his victory, or that his third-place finish in 2009 was entirely clean. It really doesn’t matter; this is a guy for whom truth and falsehood are entirely notional and instrumental.

Here’s the deal with “The Armstrong Lie,” which is a film that Gibney began making during Armstrong’s 2009 comeback and then abandoned for several years. Its title, first of all, references a headline from the French sports publication L’Équipe (“Le mensonge Armstrong”), which published a four-page investigative report in 2005 detailing clear evidence that Armstrong’s blood samples from the 1999 Tour de France had later tested positive for EPO, a banned supplement. (In 1999, no test for EPO had existed, as Armstrong and his team knew.) The truth, as they say, was out there. All of Armstrong’s seven consecutive Tour victories between 1999 and 2005 had been surrounded by whispers and innuendo, but anyone who still chose to believe his fervent denials after the L’Équipe story was willfully fooling themselves.

There was a lot of that going around, and Gibney – the Oscar-winning director of “Taxi to the Dark Side,” “Enron: The Smartest Guys in the Room,” and films about Julian Assange, Eliot Spitzer and über-lobbyist Jack Abramoff – was not immune. Armstrong was an all-American hero with a name to match, an upstart kid raised by a single mom on the plains of North Texas who had beaten cancer and then repeatedly beaten the Europeans at their most prized sporting event. People who ought to have known better, and maybe halfway did – Bill Clinton, Jon Stewart, Barbara Walters – embraced him and cooed over him, echoing his evasive mantra that he’d never failed a drug test. I suppose the liberal intelligentsia didn’t frame it to themselves quite this way, but surely those French surrender monkeys were just envious of Armstrong’s tremendous Yank virility, and set out to destroy him.

For his part, Gibney says he took on the project of documenting Armstrong’s 2009 comeback with his eyes open, understanding that many of the allegations about previous doping during Armstrong’s seven Tour victories were probably true. But as we see in the repurposed footage from that year, Gibney got sucked into a Hollywood-style narrative about the old pro fighting for one last hurrah, and his legacy, against tough odds and younger competitors. It’s like a “Rocky” sequel on two wheels, in which Armstrong is unexpectedly humbled by his own teammate, the stronger and faster Spanish cyclist Alberto Contador, and falls far behind, only to win an implausible moral victory during the Tour’s steepest climb, claiming third place and a spot on the victors’ podium.

It’s a great story, and might have provided a dramatic capstone to Armstrong’s career, had his 2009 return not also launched several investigations that ultimately convinced several of his former team members and associates to come clean about the many years of doping, the EPO and the transfusions, the cortisone and steroids and testosterone and human growth hormone. Gibney got back in touch with Armstrong after the whole edifice had begun to crumble and had a couple of post-Oprah conversations with him. Armstrong looks a little older and has lost some of his impermeable sheen, but remains just as calculating as ever, shifting from penitence to self-justification and back with an air of total dispassion.

In my view, all the stuff Armstrong did to win bicycle races really isn’t the point, or at least I don’t much care about it and have a hard time believing anybody else does either. When Armstrong told Winfrey that he never thought of his doping campaigns as cheating -- because that word implies gaining an unfair advantage over your opponent, and everybody else in cycling was doing it too – I found myself nodding in emphatic agreement. Lance Armstrong is a devious and narcissistic personality, and no one should feel sorry for him, but if they’re going to scrub his name from the record books they should just go ahead and wipe out the last 20 years of cycling history. The entire sport was driven for many years by widespread use of performance-enhancing drugs and a widespread code of silence; Armstrong was the best bicycle racer in many of those years, and he also had the best drugs, the best science and the most effective system of manipulation and intimidation. He was in it to win it.

But the real story of “The Armstrong Lie” is that Armstrong had the best story, a fact that Gibney understands but almost trundles past amid his self-referential mea culpa and his nostalgia for the relative innocence of the 2009 race. One of the numerous journalists interviewed in the film observes that Armstrong never gets credit for being a great storyteller, for having crafted a powerful personal narrative about the cancer survivor turned superstar athlete, inspiration to millions and international celebrity brand. But all he could really do was suggest the story; the rest of us were its true authors. We were the ones who accepted it, believed it, invested it with emotion and blew it up to gargantuan proportions.

After his thoroughly unlikely Tour victory in 1999, at the head of a team of cycling misfits sponsored by the United States Postal Service, Armstrong instantly became a national hero, a role model and a marketing icon, a spokesman for Nike and Oakley and BristolMyersSquibb and whoever else ponied up the cash. As is now clear, even at the time cycling insiders understood there was no way this dude from Texas, always known as a fast flat-track racer but not a strong climber, had come back from cancer and reinvented himself as a Tour de France champion, or at least not without illegal drugs. But Barbara Walters and Jon Stewart and Alex Gibney and you and me – we didn’t want to hear about that. We had written the story, and we liked it.

So the rhetorical strategy of “The Armstrong Lie” is both a strength and a weakness. Gibney’s films have always been about truth, lies and power, but for the first time he finds himself in the ambiguous philosophical terrain of Errol Morris, exploring the lies we tell ourselves. A film that’s supposedly about a disgraced bicycle racer becomes a film about why we’re so eager to believe things – or invent things -- that are evidently untrue, or at least unlikely. Armstrong would eventually be stripped of his Rocky-style third-place finish in 2009, along with his seven Tour de France titles. (Contador, the winner of that race, was later stripped of his 2010 victory, and probably just didn’t get caught the other two times he won.) Even faced with evidence that his heroic climb in 2009 was aided by an illegal blood transfusion, and even after admitting years of previous doping, Armstrong continues to insist that he raced clean that year, that one tiny piece of the story is still inspirational, still true, still as it first appeared. Who the hell knows? I’m not sure Armstrong can tell the difference at this point. The narrative he created was never really his, it was ours. Now he’s lost control of it completely.

"The Armstrong Lie" opens this week in New York, Los Angeles and Austin, Texas, with a nationwide rollout to follow.