The MPAA's backwards logic: Sex is dangerous, sexism is fine

If only the ratings agency looked as closely at gender bias as it does at consensual sex, it might do some good 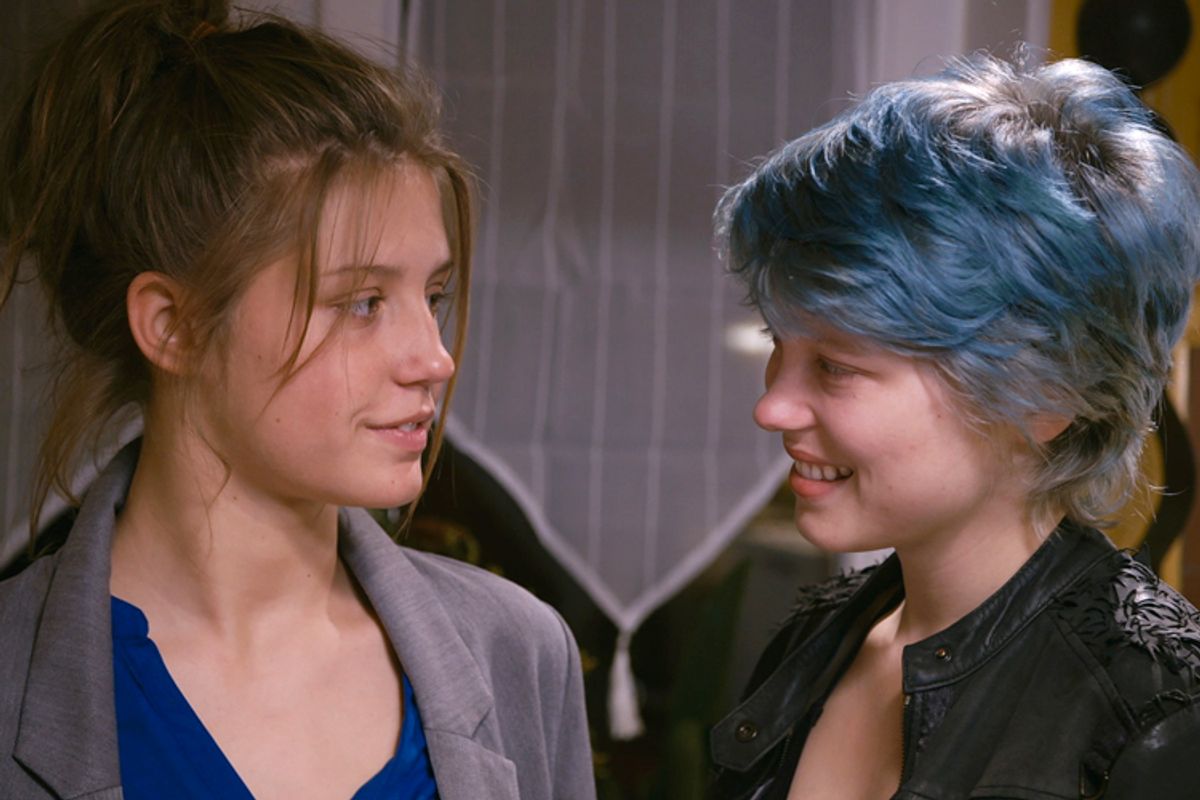 Adèle Exarchopoulos and Léa ­Seydoux in "Blue Is the Warmest Color."
--

The PTC wants the movie theatre to fulfill its entirely voluntary obligations to adhere to MPAA standards, which are supposed to reflect the opinions of “the majority of American parents.”  That’s a big job.  What if these opinions are discriminatory and perpetuate a sexist, racist, homophobic status quo? The MPAA is regularly ridiculed for the incoherence of their ratings, as well as a bias against independent films.  The documentary "Bully," for instance, was released with an R rating for profanity. Its core audiences, young teens, could not see the film without an adult.  AMC theaters released the movie with no rating and allowed teens to see it unaccompanied by an adult.  PTC head Tim Winter warned at the time that this incident could set a precedent that would “derail the whole ratings system.”

Sounds like a plan to me. While I understand and sympathize with parents' concerns about the sexualization of younger and younger girls in media, the PTC and MPAA seems to make little distinction between sexualization and objectification and expressions and depictions of healthy sexuality. The real problem in movies today isn't sex, it's sexism -- often coupled with racist caricatures for even greater effect. Imagine if our movie ratings considered sexism and racism as content that children should not be viewing without parental input. Just a thought.

The MPAA's NC-17 rating, specifically designed to “protect children,” reveals the association’s sexist and patriarchal view of what content is allowable and what is “objectionable.”  The MPAA fails completely to take into account sexism and content that objectifies girls and women, turns them into commodities, employs them as props, represents them as property and prizes, and makes them the target of sexualized and domestic violence as a plot device to demonstrate the hyper-masculinity of male protagonists. And most protagonists are male.  As NPR’s Linda Holmes described this summer, “Of 617 showings [in nearby multiplexes], 561 of them — 90 percent — are stories about men or groups of men, where women play supporting roles or fill out ensembles primarily focused on men.”  There were, as she pointed out, “nearly six times as many showings of 'Man Of Steel' alone as there [were] of all the films about women put together.” Every year the Annenberg School for Communication & Journalism also documents this onscreen gender gap.

Nor is the problematic depiction of girls and women limited to films for adults. It starts in children’s programming, where women rarely have jobs or a real purpose and where female characters are either hyper-traditional (Madonna) or hyper-sexual (whore). Portrayals of women in American film have degenerated over time, not improved.

The MPAA does not make movies, but they do rate them and generally fail spectacularly to consider sexism and the portrayal of women when they do. This is even more glaringly obvious in films it has deemed acceptable for children. For example, the PG-rated movie "Shark Tale" can contain songs such as “Golddigger” (lyrics include, “When she look at you she only see 'ching-ching'…Mill around your neck, mill around your arms… Look you in the eye, and tell a boldface lie… She's a pimpstress…she’ll seize your assets like the I.R.S.”)  Does the message that all women are manipulative, greedy, money-obsessed whores work for you? What is this song doing in a G-rated kids film?  Last year’s popular "Monsters University" was an animated frat competition in which the few female characters were eliminated before the main plot began. The opening scene of Michael Bay’s "Transformers 3," rated PG-13, is shot a crotch level from between the long naked legs of an ex-Victoria’s Secret model (she’s one of two women who occasionally speak out of fifty cast members), and that’s just the start.

At the same time, MPAA ratings clearly reveal a serious discomfort with adult women as sexual actors, with depictions of female pleasure, and with portrayals of men as objects of desire.

As Ryan Gosling explained after the 2010 film "Blue Valentine" received an NC-17 rating, in an interview that sparked Danielle Henderson’s terrific Feminist Ryan Gosling cottage industry, “You have to question a cinematic culture which preaches artistic expression, and yet would support a decision that is clearly a product of a patriarchy-dominant society, which tries to control how women are depicted on screen. The MPAA is okay supporting scenes that portray women in scenarios of sexual torture and violence for entertainment purposes, but they are trying to force us to look away from a scene that shows a woman in a sexual scenario, which is both complicit and complex. It's misogynistic in nature to try and control a woman's sexual presentation of self. I consider this an issue that is bigger than this film."

There are alternatives to the MPAA system. Common Sense Media, a non-profit children’s media advocacy group, has a detailed and considerate rating system for parents, as does the website Kids in Mind. And last month several Swedish theaters unveiled a new movie rating system that incorporates the Bechdel Test, a measure of the presence of women in films. Their explicit goal is to identify gender bias in films with the intent of promoting gender equality.

Recently several films, notably "Concussion" and "Afternoon Delight," have told stories in which women explore sex, from women’s perspectives. But not very many movies do this, and certainly not many rake in millions.  The MPAA’s use of the NC-17 rating makes sure that this stays the case.  Because of the MPAA’s biases, movies that challenge patriarchal norms are more likely to fail because NC-17 movies are not distributed widely. The IFC's decision aside, it's a rating that can still hurt a movie.

The fact that people can take their 14-year olds to R-rated movies that feature beheadings, severed limbs, bloodied torsos, rapes, decapitations and worse but not to a movie that shows two women enjoying consensual sex is a serious problem.  And just because we live in a sexist, hyper-masculine culture damaging to both boys and girls doesn’t mean that we also have to accept a media rating system that perpetuates sexism and violence.

Correction: An earlier version of this story misstated the rating of "Shark Tale." It is rated PG.