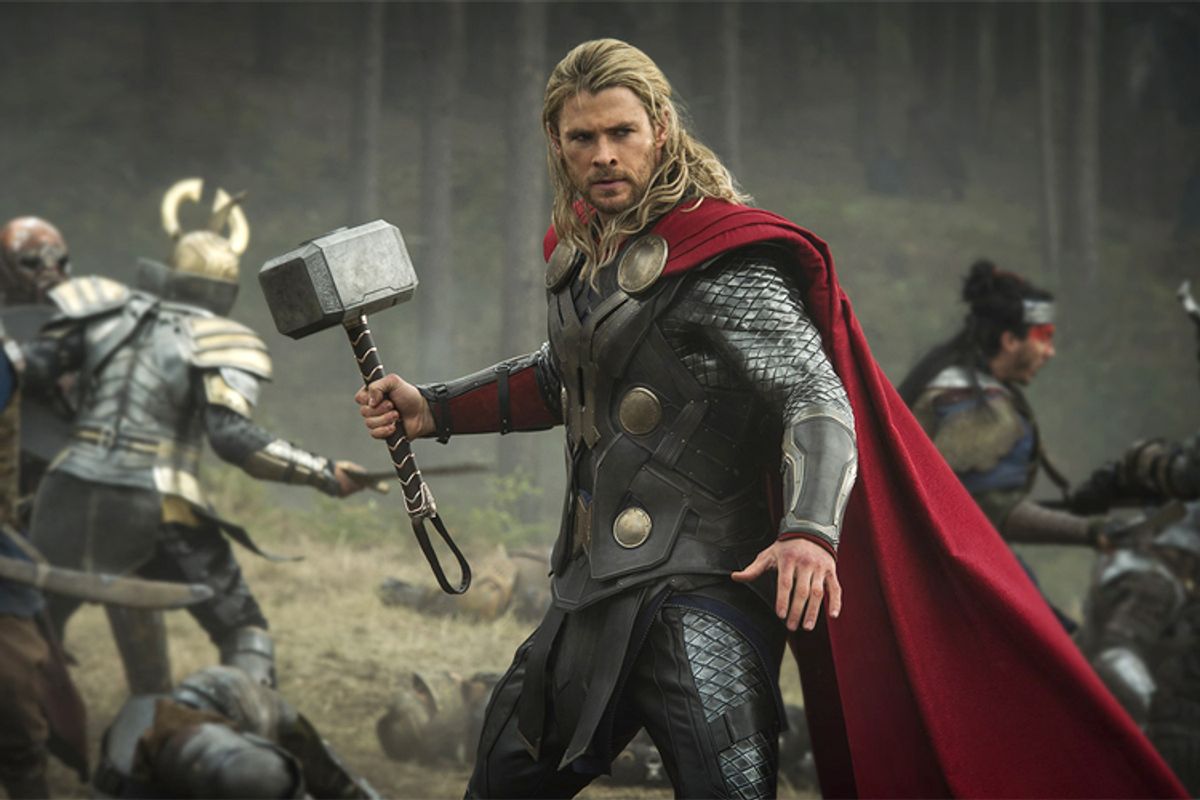 Someday, I suppose, cultural-commentator types will get to write stories about the decline of the comic-book movie and have them be true. The western, the historical romance and the hard-boiled crime film have all had their day at the apex of the Hollywood production system, and then the world moved on. But at the moment it's a little like green activists warning us about the peak-oil apocalypse: That day is not here, nor is it coming soon. If it seemed mildly eccentric for Marvel and Disney to schedule the release of "Thor: The Dark World" in November, customarily the zone of adult-oriented Oscar bait, the result will apparently be yet another huge worldwide hit. They probably did it, more than anything else, because the standard May-to-July corridors, both this year and next, were already overcrowded with costumed heroes and otherworldly evildoers.

Over the last decade or so, the struggle for pop-culture supremacy has slightly tilted toward the Marvel Comics world of Thor, Iron Man, Captain America and the Avengers (along with Spider-man) and away from the DC realm of Superman and Batman. But the two empires remain in rough balance, and the result is something like a steady-state universe, which also describes how I felt about "Thor: The Dark World." It's a highly capable sequel that drinks long and deep from the established Marvel legendarium and brings back all the key players from Kenneth Branagh's 2011 hit "Thor": Agreeable Aussie hunk Chris Hemsworth as the Thunder God, Natalie Portman as his Earthling scientist lover (entirely unconvincing), Tom Hiddleston as Loki, the conniving trickster of Asgard (awesome, as always), and Anthony Hopkins, punching the clock a little less obviously than usual as Odin, the one-eyed Allfather and guardian of the Nine Realms.

Veteran TV director Alan Taylor (most recently of "Game of Thrones") takes the reins for what feels very much like the middle chapter of a trilogy, and has many of the expected problems. What I enjoyed about the film and what I found annoying nearly canceled each other out, so that after two hours of noise and battle scenes and high-end CGI effects and conversations in the proto-Icelandic dialect of the Svartalfen, or Dark Elves, it almost seemed as if I hadn't had the experience at all, or as if this bewildering jumble of fantasy ingredients really were composed of miscellaneous bits and pieces of other movies I've already seen. Here's what I liked: the nerdy density of the storytelling and the evident respect for the comic-book audience; Hiddleston's irresistibly feminine sneer, and the admixture of regret and diabolical cunning on his face; Idris Elba, even standing still and doing nothing; cinematographer Kramer Morgenthau's spooky, spectral shots of Portman floating in womblike interstellar space, wreathed in tendrils of red goo.

Most superhero movies, and especially the Marvel films, remain imprisoned by genre convention in a way that larger containers like science fiction or horror or mystery have long since transcended. Of course most sci-fi and horror are mediocre – because most things are mediocre, period – but anyone who tried to claim those genres were incapable of carrying philosophy or political allegory or social satire or insights into the human condition would be laughed out of town, and rightfully so. Comic-book movies have all that detailed back-story behind them, familiar to a large portion of their audience, and also have to satisfy the formulaic expectations of the action-adventure spectacle, in which large portions of the picture become an ear-splitting and visually incoherent assault, the cultural equivalent of a 64-ounce vat of Mountain Dew.

Christopher Nolan managed to turn that formula toward his own ends in the "Dark Knight" trilogy, and his protégé Zack Snyder certainly tried to, in "Man of Steel." But most of the time in this kind of film we're left to discuss picayune technical points, as with Kabuki theater or porn or '70s kung-fu movies: How badass are the villains? (Really just your standard pointy-eared, blue-skinned aliens, with a bit of Norse mythology layered on top.) How great are Elba's stoical line deliveries? (Pretty great.) Any new areas of Asgard we haven't seen before? (A drinking hall, very "Lord of the Rings.") Does Odin once again appear to wish he were on the beach getting high rather than ruling the universe? (A bit.) What major Earth landmarks will be destroyed? (The Royal Naval College in Greenwich, England, the spot where all nine realms of Yggdrasil are lining up like billiard balls or something.)

See, Natalie Portman has been mooning around on our planet, doing astrophysics and waiting for her Thunder God lover-man to come back, but then she accidentally enters another dimension and has this glowing red ooze called the Aether enter her body. I know; that sounds hot, but it mostly isn't. See, something called the Convergence is happening, which involves Stellan Skarsgård getting naked at Stonehenge and the Dark Elves who once ruled the universe getting another chance to destroy all of creation and once again have a dominion of gloom and chaos. And fair enough, I kind of see their argument. All normal physics is suspended and gods, objects and people go careening from one universe to another, which is fun to watch but extremely confusing. Natalie even gets a booty call from her other boyfriend while she and Thor are stuck in a cave in Svartalfheim, realm of the Dark Elves. Embarrassing!

In a desperate attempt to head off this apocalypse, Thor ultimately has to set Loki, his villainous but inventive foster brother, free from the prison cell he has inhabited since the end of the last movie. These are by far the best scenes of the film, both because Hiddleston is a crack-up at almost every moment and because he makes this comic-book gloss on a mythological deity feel completely convincing. As in the actual Norse legends, this trickster Loki is an adversary of the gods who is also bound to them and sometimes helps them; Hiddleston actually makes you feel the anguish of a character who genuinely loves those he betrays, and who often wishes he could be better than he is.

I can't say much about the other actors and, really, what difference does it make? Hemsworth is pliable enough, as lumps of granite go (he was much better in "Rush"), while Portman is miscast. Not one but two major Asgardian figures die in this movie, which establishes and maintains a tone of somber grandiosity, and as Marvel-movie devotees will expect, there's a post-credits stinger suggesting that Benicio del Toro will play the series' next villain. As to the question of whether "Thor: The Dark World" is a "good movie," worth an entire evening of your life and the relevant cash outlay, here's how to decide: When Thor enters his girlfriend's London apartment, he carefully hangs his big honking hammer, by its strap, on a coathook inside the door. If you think that's funny, or at least understand why it's supposed to be, then you're good.