Time magazine fat-shames the governor on a lazy new cover 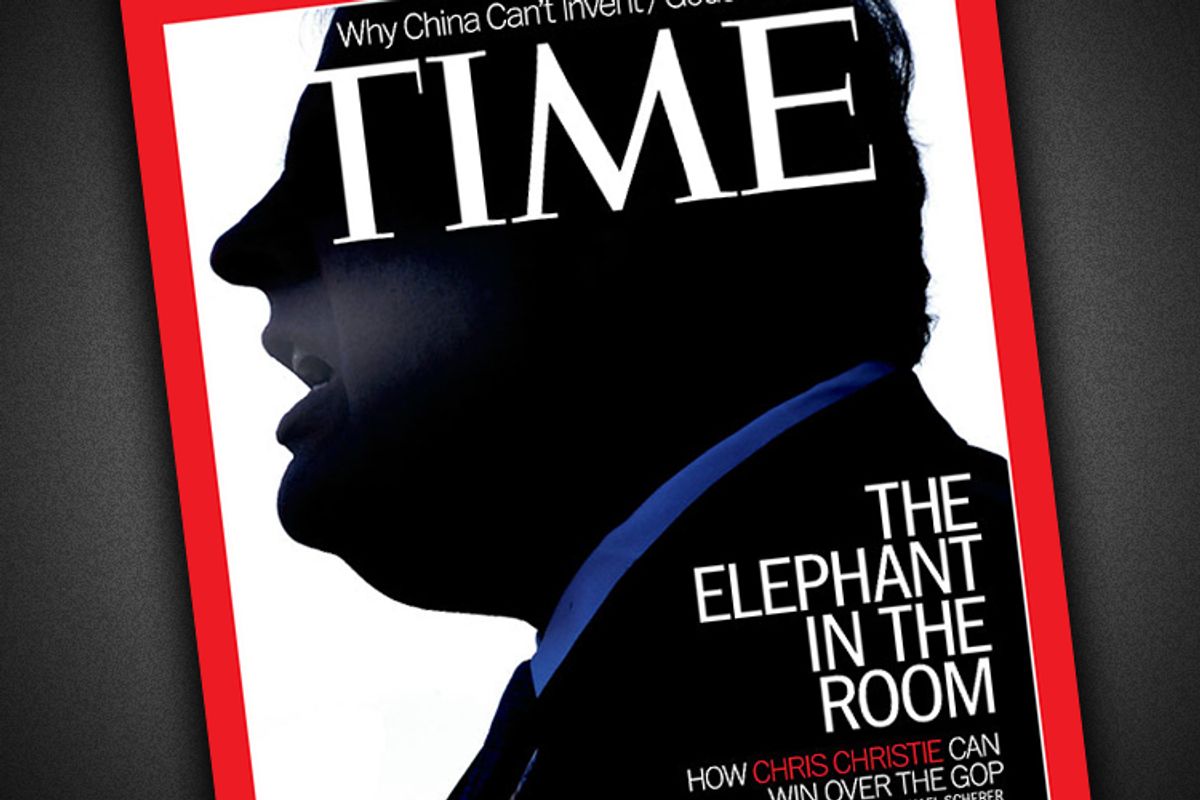 You've put me in an uncomfortable position today, Time magazine. I'm a public school-supporting, marriage equality-believing, pro-choice liberal who spends a good portion of her time shuddering over the antics of the man who is currently in charge of my beloved home state. I am not the target audience for your magazine stories that paint bullying Republican blowhards as "a White House contender." And now I have to go and tell you not to be jerky to this guy. You angry up my blood, Time magazine.

It's not the content of Time's new cover package on the Jersey governor it says was "born to run" -- GET IT? -- or its arguments that he's "what the party needs" that are problematic. It's the cover itself, with its dark, National Geographic-esque profile shot of Christie and its description of him as "the elephant in the room." GET IT?

The reference is surely meant to work on a few levels. We understand them – Christie is Republican, a symbolic elephant. As for the traditional meaning of the phrase, one could say that it's a reference to Christie's somewhat outsider status in his party – a power player who's no friend to the Tea Party nutjobs.

And then there's the matter of Christie's size. Christie is also, in case you hadn't noticed, fat. Earlier this year, he had Lap-Band surgery and has in recent months been looking more slimmed down, but he's still undeniably plus-size -- a state of being that he's said makes him "fair game" for taunts. In September, a video surfaced of his opponent state Sen. Barbara Buono snarking that "I don’t know about you, but seeing Chris Christie frolicking on the beach is not going to drive me to go to the shore." And four years ago, the Jon Corzine campaign accused Christie of "throwing his weight around." Har har har!

It's true that phrases like "elephant in the room" or "throwing your weight around" are commonly applied in non-overweight person situations. If Time magazine were to do a cover story declaring John Boehner "living large" or Sarah Palin having a "fat chance" of a comeback, it wouldn't mean anything. But when you use certain idioms toward certain people, they take on different and potentially deeply offensive meanings. You don't call a minority candidate a "dark horse." And you do not call a man of Chris Christie's dimensions an elephant. Period. It means something different when you say it about him. It's mean and it's petty, even in an otherwise flattering piece. And it's lazy as hell. To comment on a person's size rather than the substance of his record immediately telegraphs that this is what's important about him, this is his distinguishing characteristic. It's not OK when anybody does it to liberal women and it's still not cool when anybody does it to a white conservative man.

Early this year, Time put Christie's face on its cover above the Springsteen themed words "The Boss." It's not an especially flattering photograph; he's not an especially photogenic man. It's not his job to be. Nobody needs to tiptoe around the reality of what Chris Christie looks like. Chris Christie knows what he looks like. As he recently said, "I'm making the best effort I can, and sometimes I'm successful, and other times I'm not." But even when he's not clocking in at Paul Ryan weight, you don't need to call him a pachyderm. And anybody who does is just a big fat jerk.