No, child support can't be a choice 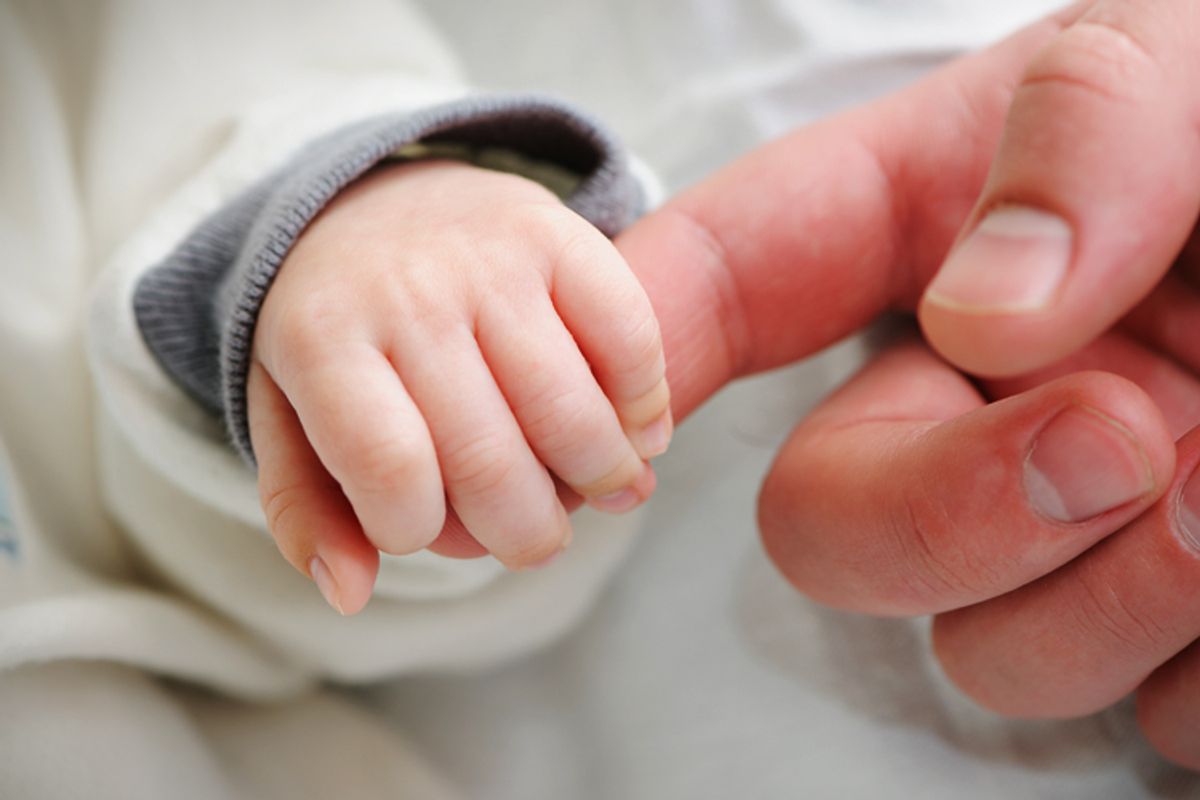 Mention the words “child support” on Twitter, and you’re likely to set off a bitter discussion. Men complain about a system that unfairly enriches women at the expense of men, while women complain about a system that fails to serve their needs as single mothers. Recently, Salon reprinted an essay by Anna March that attempted to make the feminist case that mandatory child support laws – which March termed “forced fatherhood” – are inherently unfair to men.

As others have pointed out, feminist arguments in support of male reproductive rights aren’t new. March approvingly cites Laurie Shrage’s June New York Times Op-Ed, in which Shrage claims that a man in the United States who accidentally conceives a child with a woman has fewer rights than women, particularly if he does not wish to raise the child with her. March seeks to balance the scales by doing away with mandatory child support and making it easier for men to opt out of providing financial support for a child they do not want.

March assumes that safe, legal, affordable abortion is always available, despite ongoing efforts in state legislatures to either severely restrict abortion access or ban it altogether. She overlooks the fact that adoption may not be a viable option for all women who wish to carry a pregnancy to term but not raise the resulting child -- studies show that African-American children, in particular, are adopted at lower rates than children of other races.

But the biggest flaw in March’s argument is that she equates paying child support with fatherhood.

March relates a personal anecdote about how her mother, unable to obtain an illegal abortion, committed “paternity fraud” – convincing her then-boyfriend that the child she was carrying was his, although March’s mother knew another man was the father. March’s putative father apparently figured out that the child wasn’t his when March was born, not sickly and premature, but full-term and healthy. Tellingly – and importantly – March says, “He went along with it, though.” The man married March’s mother, and although they later divorced, he continued to pay child support until March turned 18. March intends for her story to illustrate the evils of forced fatherhood, but her story instead proves a different point – that a man, unlike a woman, has the right to opt into or opt out of fatherhood.

Pregnancy is, of course, a natural byproduct of intercourse. People can reduce the risk of unplanned pregnancy by using protection, but protection is not fail-safe. Although the blame for unintended pregnancy is often placed on a woman – I’ve even seen it argued that a woman should “make” a man use protection if she doesn’t want to get pregnant -- the truth is, men and women share equal responsibility for taking precautions to prevent an undesired pregnancy. But humans do not always behave as they ought. Whether or not contraception is used by one or both parties, when two people have sex, they both assume the risk of pregnancy, and thus both should bear equal responsibility if a pregnancy results.

While it may not be easy for most men to opt out of paying child support, it is incredibly easy for a non-custodial father to opt out of fatherhood. The burden of actually raising a child usually falls to the mother as the custodial parent. Women who are on welfare generally are required to cooperate in obtaining a child support order, but for women who are not on welfare, seeking a child support order is optional. Custody and visitation are separate from child support, and a non-custodial parent is not required to seek shared custody or to exercise visitation rights. Thus, the whole concept of child support as “forced fatherhood” is silly. A man can choose not to have a relationship with, or help raise, a child he has fathered. Unless she puts a child up for adoption, or the child is put into foster care for other reasons, a mother generally becomes the custodial parent by default. When a mother voluntarily gives up custody, abandons her children, or is found unfit or unable to parent, custodial fathers bear all the same responsibilities of single parenthood, and are entitled to all the same legal rights as custodial mothers -- including child support.

Men often complain about women who abuse the system, spending child support dollars on trinkets and treats for themselves. The abusers exist, but they are not representative of most women who receive child support. I cringe when I hear comments like, “I pay for my kid and every time I see his mom, she’s wearing a new outfit.” What matters is not what the mother is wearing, but whether or not the child is being properly cared for. As long as the child is also well-fed, well-groomed, living in safe housing, and enrolled in the best school available, the mother’s grooming habits should be irrelevant.

Still, abuses do occur. It should be easier for the non-custodial parent to report abuses, and/or have child support payments go toward specific expenses (e.g., medical bills or tuition). If a father has reason to believe a neglectful mother is endangering the welfare of his child, he should seek a custody order. The current child support system should be studied and improved. But the fact that the system may need reform does not mean that the concept of child support is unfair to men.

Although March recognizes that child support payments are often what keeps food on the table and a roof over a child’s head, she argues that states (meaning, taxpayers) should bear the financial burden for men who have opted out of child support. This is an untenable position. Child support was one of the linchpins of welfare reform, and was premised on the sound notion that a man who fathers a child should share in the financial responsibility for the child’s well-being. In a climate where SNAP (food stamp) benefits have been cut for poor children, it is reckless to suggest that child support should be made optional.

If anything, it should be harder, not easier, for men to opt out of fatherhood. My ex-husband dutifully pays his court-ordered child support each month, but his contact with his children in the seven years since our divorce has been sporadic at best. This is not fatherhood. While it is understandably tempting for a father to walk away from his child because he wants nothing to do with the child’s mother, doing so hurts the child in the long run.

I am aware of, and saddened by, situations in which a vindictive parent uses the children as pawns in a battle with an ex – including disparagement of the other parent, last-minute visit cancellations, and even false accusations of physical or sexual abuse. In these cases, the non-custodial parent – often the father -- may feel like walking away from the situation until the children are old enough to seek out a relationship with him independent of their mother. But learning how to co-parent after a failed marriage or partnership – or even a one-night stand that results in pregnancy -- is critical for the health and well-being of the child. As Deesha Philyaw and Michael D. Thomas point out in their book, "Co-Parenting 101: Helping Your Children Thrive in Two Households after Divorce," “Co-parents should seek to act in the best interest of the child – children who did not ask to be born … and whose needs should be their parents’ primary concern.”

Laws restricting access to birth control and abortion are forcing women into motherhood against their wishes. Men may not be able to opt out of legal paternity, but they already have the right to opt out of fatherhood – leaving women to raise children on their own. And although paying child support may be inconvenient, it is neither akin to forced fatherhood, nor nearly as burdensome as forced motherhood.