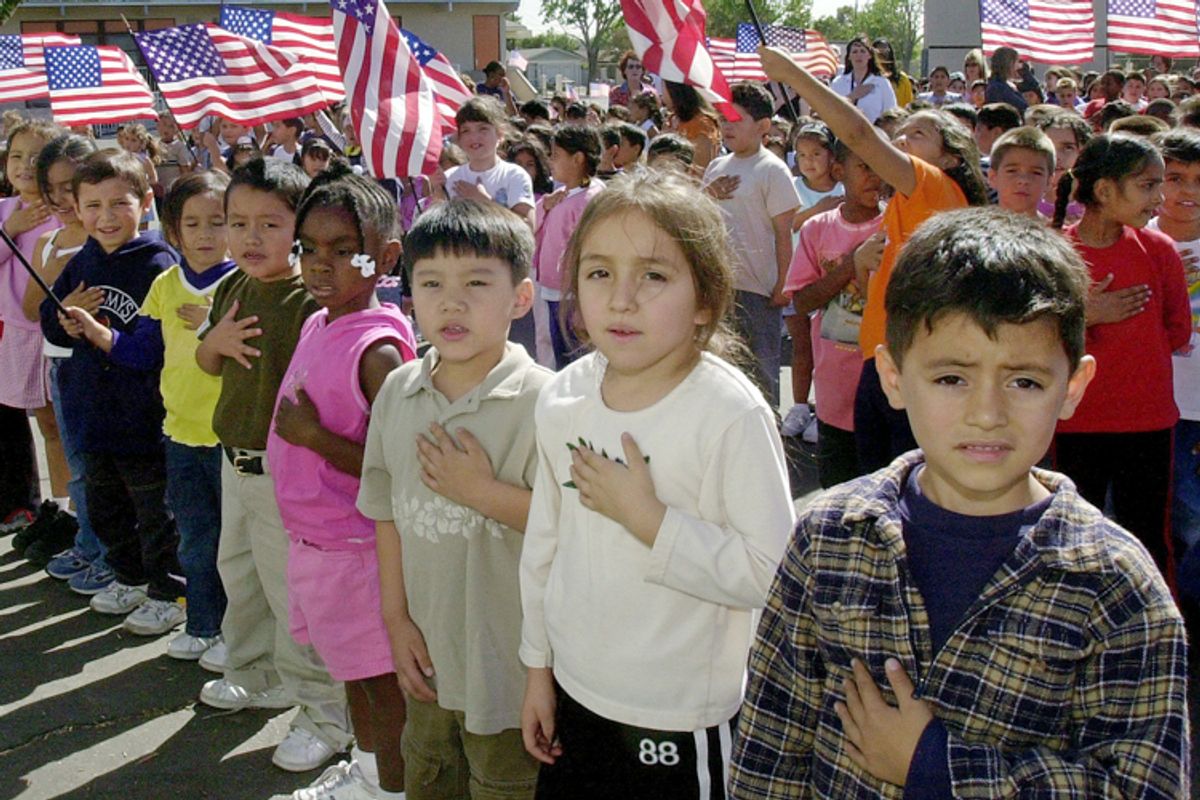 Imagine a place where young children are forced every day to declare their nationalism. Imagine a place where, if a child says he can't do it, for religious reasons, his teacher physically tries to force him to do so and says to "move out of the country." Imagine Florida.

As the Tampa Bay Times reports this week, a fourth grade teacher was suspended last month after allegedly making a 9 year-old boy, who is a Jehovah's Witness, say the Pledge. The boy told school administrators that early on September 11, his teacher Anne Daigle-McDonald took his wrist and placed it over his heart, telling him, "You are an American, and you are supposed to salute the flag." The next day, several students say that she did the same, and then told the class, "In my classroom, everyone will do the Pledge; no religion says that you can't do the Pledge. If you can't put your hand on your heart, then you need to move out of the country."

Jehovah's Witnesses are forbidden to salute any flag, and to do so is considered a serious violation of the faith's restriction on worshipping objects. But the boy's parents had instructed him to stand respectfully during class Pledge time. And his mother, who asked not to be identified, told a news affiliate Wednesday that she explained her religion to the teacher at the start of the school year. "I still spoke to her for five to eight minutes about my religion, our religion," she says. "We still love our country. We respect other people's rights to do that. We respect the flag."

During a hearing in September, Daigle-McDonald denied forcing the child to say the Pledge, saying, "I showed him gently, taking his hand (wrist) and putting it on his heart…. I was explaining it to him how we say the Pledge. I told him he did not have to say it." Written statements from seven students attest that Daigle-McDonald later told the class, "If you can't put your hand on your heart, then you need to move out of the country." She claims that the remarks were "Not to him. Not to anybody. I was talking about terrorists, like 9-11. They wouldn't say the Pledge so they should go back to their home country." She says it was "a social studies issue."

The District ruled that she violated the boy's Constitutional rights and made derogatory remarks which "embarrassed the boy." She was suspended for five days and has been removed from student contact, and will now have to undergo diversity training.

In a landmark ruling seventy years ago, the Supreme Court ruled that forcing schoolchildren to recite the Pledge is unconstitutional. In its decision, the court cited Jehovah's Witnesses and noted that "Children of this faith have been expelled from school and are threatened with exclusion for no other cause. Officials threaten to send them to reformatories maintained for criminally inclined juveniles. Parents of such children have been prosecuted, and are threatened with prosecutions for causing delinquency" and famously declared, "If there is any fixed star in our constitutional constellation, it is that no official, high or petty, can prescribe what shall be orthodox in politics, nationalism, religion, or other matters of opinion, or force citizens to confess by word or act their faith therein…. We think the action of the local authorities in compelling the flag salute and Pledge transcends constitutional limitations on their power, and invades the sphere of intellect and spirit which it is the purpose of the First Amendment to our Constitution to reserve from all official control."  And earlier just this school year, Massachusetts atheists challenged the tradition of saying the Pledge, asking that the words "under God" be struck from it.

Nobody requires adults to stand up every day and rattle off a promise to be loyal to a flag and to a country "under God." Yet in a large number of our schools, we expect our children to do so. Worse, we punish and rebuke them when they don't. It's pointless indoctrination that it serves nothing but killing a minute of class time. And disturbingly, it makes it easy for bullying teachers to root out the kids they believe are someone less than loyal little Americans. And though she knew the boy's religion, Daigle-McDonald told the District she "just wanted all of the students to respect the day. It wasn't a holiday, so I didn't see why the whole class couldn't say the Pledge."