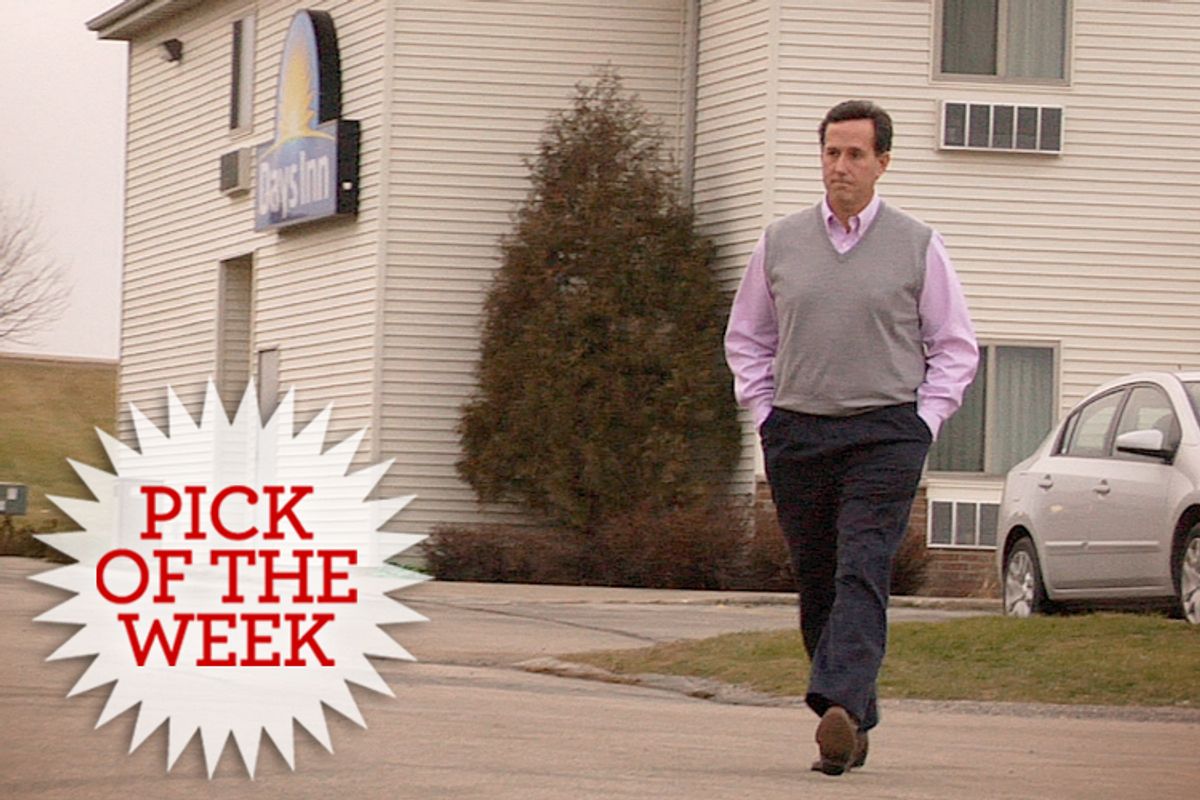 I suppose the danger of AJ Schnack’s immensely entertaining documentary “Caucus” is that it retells all the hair-raising twists and turns of the 2012 Republican caucus in Iowa as human drama, with the things we’re supposed to care about – the ideology, the “politics” – stripped away. We know for sure that none of these clowns will ever be elected president, so we’re free to view them as flawed, interesting, crazy and sometimes even sympathetic characters in a larger narrative that’s beyond their control. I would argue, in fact, that this gripping and grotesque portrait of retail politics in the Hawkeye State, entirely free of editorial commentary, locates truths about the contemporary Republican Party and our flawed electoral system that a more tendentious account never could.

I was a little hesitant to watch “Caucus,” and it might indeed sound masochistic to invite Michele Bachmann, Newt Gingrich and Rick Perry back into your consciousness after you thought they’d been banished for good. But they’re all so weird! Any HBO writer who tried to invent the crazy-eyed Bachmann and her flamboyantly gay-seeming husband, Marcus, would be laughed out of story meetings. Considering the fact that Bachmann was briefly regarded as the Republican front-runner and became the subject of a New Yorker feature forces you to question the sanity of the governing media caste, or perhaps the Matrix-like nature of political reality.

As Schnack captures, after Bachmann won an opinion-shaping but essentially meaningless Iowa straw poll late in 2011, she behaved as if she’d been elected president and everything else was just a formality. She kept big crowds waiting for her, Elvis-style, and posed for photos with favorable headlines in lieu of giving an actual speech. Gingrich landed in Iowa and was briefly anointed as the ideological savior of the GOP brand, but the guy we see in “Caucus” is obese and desultory, a caricature of his former firebrand self who tries to flirt with grossed-out undergraduates (“When your brain gets unfried, I’ll be the only Newt Gingrich here”), spins anecdotes from the distant past, and tells one Iowa reporter that a local zoo “is on my short list of really well-run zoos.”

Next! Perry announced his candidacy just after Bachmann crested, and the national media had a collective orgasm. He was unbeatable! He was Ronald Reagan mixed with George W. Bush, a Texas governor with a pro-business agenda and impeccable Tea Party credentials, who had never lost an election and might ride an anti-Obama wave to a landslide election. Politics aside, Perry actually seems like a less repulsive person than Bachmann or Gingrich – Schnack catches him sharing a minute with an 87-year-old World War II vet, and it’s rather sweet – but he’s also a country-fried idiot who can’t veer away from his American-exceptionalism stump speech without disaster. When you’re too stupid for the Republican Party in 2012, that’s really saying something.

We also get a few peeks at pizza tycoon and flat-tax advocate Herman Cain, who had his mostly made-up moment too. The dude can sing! He brings the noise at one campaign rally, crooning an old spiritual accompanied by country guitar, which may be appropriate since it’s Iowa and he’s the only black person within about 500 miles. Actually, wait, he’s not: An African-American man approaches Cain after the rally and Schnack captures the candidate’s exaggerated disbelief: “Are you really a conservative? Did you know that you’re black?” I suppose it’s only 20/20 hindsight that makes it appear that Cain is suspiciously eager to have his picture taken with his arm around attractive women. At any rate, he seems like a fun guy to hang around with, and if he’s a lecher, at least he’s a better-looking one than Newt Gingrich.

I didn’t want to spring this on you earlier for fear you’d smash your computer or throw it across the room, but you’re ready now: The not-so-secret hero of “Caucus” is former Pennsylvania Sen. Rick Santorum, who plugs his way across Iowa in his Dodge pickup and an endless wardrobe of endearingly dreadful sweater vests, talking to anyone and everyone who will listen. He’s almost a Frank Capra character, a plain-spoken man of principle who believes in old-fashioned politics and refuses to tell lies just to get elected. “Caucus” is in many ways the story of Santorum’s triumph, short-lived as it turned out to be: Despite polling in the low single digits in the fall of 2011, Santorum outlasts Bachmann, Gingrich, Cain and Perry and winds up in a dead heat with Mitt Romney, candidate of the GOP establishment.

Let’s be clear: I wouldn’t vote for Rick Santorum for dog-keeper if the other candidate were a dog. He’s a committed Christian conservative – actually, a Catholic conservative, a subtle but important distinction – who is forcefully opposed to abortion rights and marriage equality, and rejects the scientific consensus on climate change. I do not lament the fact that he didn’t get elected to national office (and never will). But amid all the overheated anti-Obama rhetoric and wild, unfulfillable promises of the Iowa campaign, Santorum comes off as the only candidate who isn’t telling people exactly what they want to hear, and who isn’t fueling hatred for its own sake.

No, he tells one quasi-libertarian interlocutor, a flat tax is not actually a good idea. (Throughout his career, Santorum has been one of the few national Republicans with a strong record on issues of poverty and class.) No, he tells someone else, states don’t get to do whatever they want, free of federal oversight. (He intends to apply that rule to gay marriage, of course.) On at least two occasions in “Caucus,” older white voters launch into racist diatribes about Mexican immigrants, and you can feel Santorum’s discomfort leaking through the camera lens. This isn’t the conservative movement he signed up for: He wanted the shining city on a hill; he wanted to serve Christ and celebrate the American family. He doesn’t want to stand here in a small-town diner in the middle of Iowa on a freezing afternoon while some geezer whose meds are wearing off rambles on about secret truckloads full of drugs, or “the enemy” sneaking across the border in the night.

I’m giving Santorum too much credit for representing the last vestiges of optimism and idealism within right-wing ideology, and for his faint traces of intellectual consistency. (One can’t help comparing him to the relentlessly vicious Ted Cruz, who has inherited much of Santorum’s base.) But consider the context: In “Caucus,” Mitt Romney’s campaign seems entirely cynical. He parachutes into Iowa periodically, holding carefully stage-managed events and saying almost nothing that can be clearly understood. At the state fair, he eats a vegetarian corn dog while literally running away from the person foisting it on him. When he’s working a crowd, his WASPy performance of folksiness barely tries to seem authentic. “All my best,” he tells people, grin frozen in place. “You’re so kind.” Romney’s corporate cynicism prevailed, but made no one happy in the end. Santorum, like all tragic heroes, found true victory in defeat.

"Caucus" is now playing at the Elinor Bunin Munroe Film Center in New York, with wider release and home video to follow.