The Thought Catalog revolution: How trolling took over the Internet

There's only hate-reading and trolling online. Can anyone find a new model? 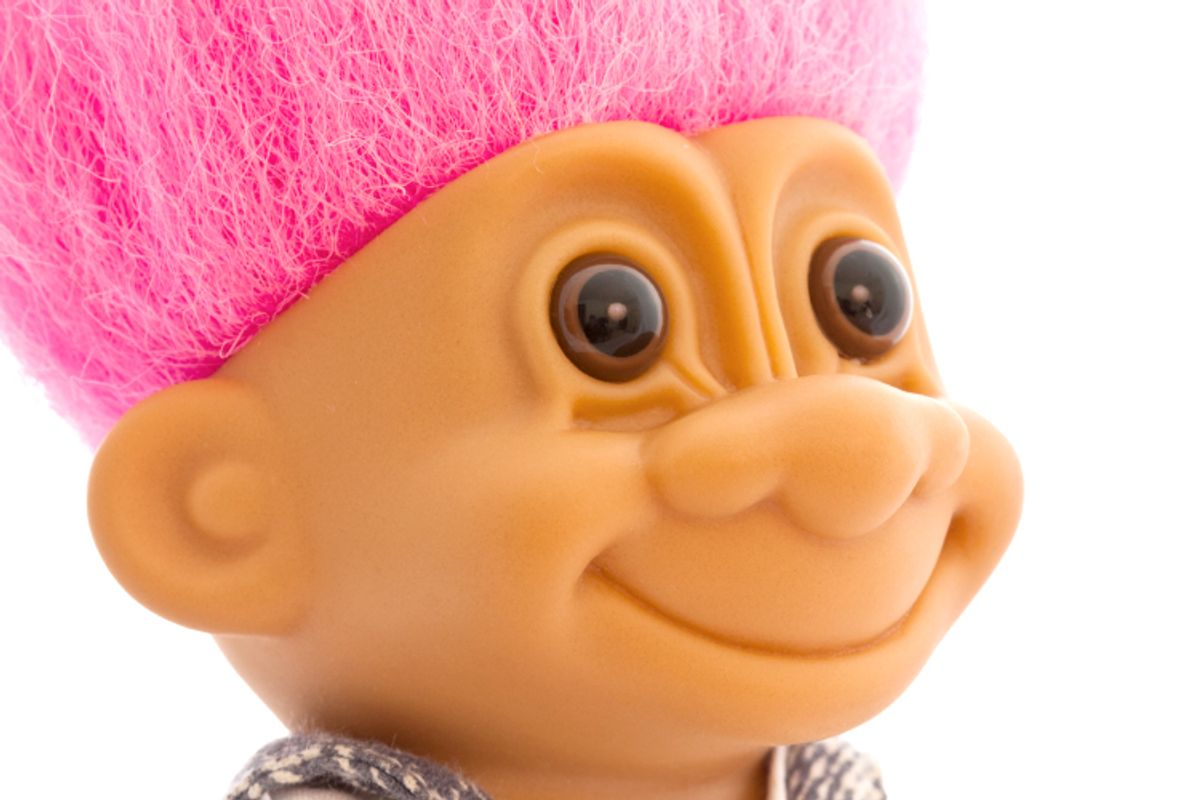 They know they're making you mad. The website Thought Catalog sits at the intersection of the hauteur of the young and the privilege of the wealthy; it's become the subject of scrutiny, lately, for its alternate aggressive positioning as a place for young people to boast about their entitlement or to bizarrely miss the point. A piece by Rachael Sacks, a college student, about how persecuted she felt for having come from wealthy circumstances ("It just seems really petty and makes you look bitter and unhappy with your own life if you are casting nasty glares at college girls in Gristedes because you’re a cashier") got its author on the cover of the New York Post. And more recently, a post about the "22 Awesome Things About Being a Woman" included this description of legs: "running your hands up and down your silky marble columns." One of the awesome things was moisturizer. Another was "boobies."

The current Thought Catalog aesthetic, speaking broadly -- one that exists at the corner of thoughtless prurience and a nihilistic insistence upon mocking your prudish sensibility -- is close to objectively bad. And it is aware that its readership stems not from its brilliance but its brilliance at trolling the reader; Sacks didn't agree to pose for the cover of the New York Post because she wanted to have an honest and frank discussion of privilege. Whatever Chelsea Fagan's intentions with her piece on womanhood, its fit in the template and tone of Thought Catalog -- so gravely serious about being unserious, so insistent upon its own cleverness while displaying no signs of self-awareness -- was so seamless as to actually hint at some level of self-awareness. Fagan is a prolific writer on a website that updates constantly; it does not seem as though any one piece takes much effort, and taken together they tell a story of how easy it is to get a rise -- and a click -- out of someone.

There are many paths to traffic: One is to invest heavily in a quality product. Whatever one thinks of "Snow Fall," the New York Times' influential attempt to draw readers with a visually complex story, it certainly was the product of time and effort. Less so are the likes of Thought Catalog pieces like "If You Want a Blowjob, Wash Your Damn Dicks" or "Melissa McCarthy: Stop Being Fat And Stupid." Or the side-boob provocations of the sillier corners of the Huffington Post, or Henry Blodget at Business Insider asking why anti-Semitism exists, or the dubiously sourced "inspirational" tales on Viral Nova, or the curdled insistence upon the contrarian read of just about everything across the Web.

Have we reached the natural end of click bait? It is difficult to imagine Web content getting more deliberately provocative -- at some point, it reached peak troll. And people may be wising up, knowing that reading something whose only reason to exist is to make them angry may not actually be worth doing.

Alanna Okun, an associate editor at BuzzFeed, keeps a "Thought Catalog jar" to discourage herself from clicking on that site's links. She said:

I sometimes put in a dollar when I succumb to a glaringly obvious link they tweet — I believe the most recent was '10 Reasons Being Intelligent Is Difficult' — and empty it when I need cash. It's mostly a complete joke but it does remind me that I am the master of my own internet fate; I wouldn't have clicked that if some teeny part of me didn't want to hear about why being intelligent is difficult, or at least if some (hopefully) teenier part didn't want a bit of good old-fashioned hate-reading material.

BuzzFeed may have solved the question of traffic obtained without explicitly soliciting hate-reading; the site's business model explicitly leans on people sharing content rather than finding it through search engines, and people are likelier to click on articles on Twitter that are pitched to their interests and desires. But its articles also often elide the authorial voice in order to make the reader feel like the star of the story; stories can be about you as Michigan State grad or Jennifer Lawrence fan. Writing a piece that leans on the writer's authority and the reader's familiarity with his or her voice is an easy way to get hate-reads, as Chelsea Fagan of Thought Catalog, who has an e-book of her collected pieces, knows; Viral Nova and Upworthy have a house argot that's very, very easy to identify at 30 paces (it depends on breathless, credulous enthusiasm). Is there a future for an authorial voice that's, well, good?

"It's getting worse. Don't be fooled by our bubble. It's all Elite Viral Nova Insider Feed Worthy all the way down for normal people who use the Internet," said Choire Sicha, editor of the Awl. And that tone has changed what it means to read online. Recall that Alanna Okun knows that she actually wants to read Thought Catalog, and that she enjoys it somewhat; there's an ambivalence there that is getting easier to own up to as the Web gets worse and worse. "My guess is most people don't care whether a publication is trolling or not; the click-impulse seems governed by the reptilian brain," said Ann Friedman, a writer and editor.

"But whether they actually read through after they click? Maybe that's what's changed." It's not as though one needs the full length of a Business Insider piece to know why it's so silly.

There are people who manage to avoid hate-reading altogether: Emily Gould, the proprietor of Emily Books, said she is getting better at it. "I think people are learning not to open tabs, period. Increasingly, we're seeing new publishing models emerge that change the way curated articles are distributed, and so I, like a lot of other people, find myself less dependent on 'UGH, THIS: [Article]' style curation from whomever. I choose the channels I want to pay attention to, support them with subscription money rather than clicks, and filter everything else out of my media diet and my consciousness."

Reading something purely for love is no longer a scalable business model; it's simply too easy to gin up hate, which is why everyone's doing it. Perhaps the money one puts in one's Thought Catalog jar should go toward a paid subscription to a smaller site; those sites are the only places that can afford never to troll.