You don't have to dance at your mastectomy 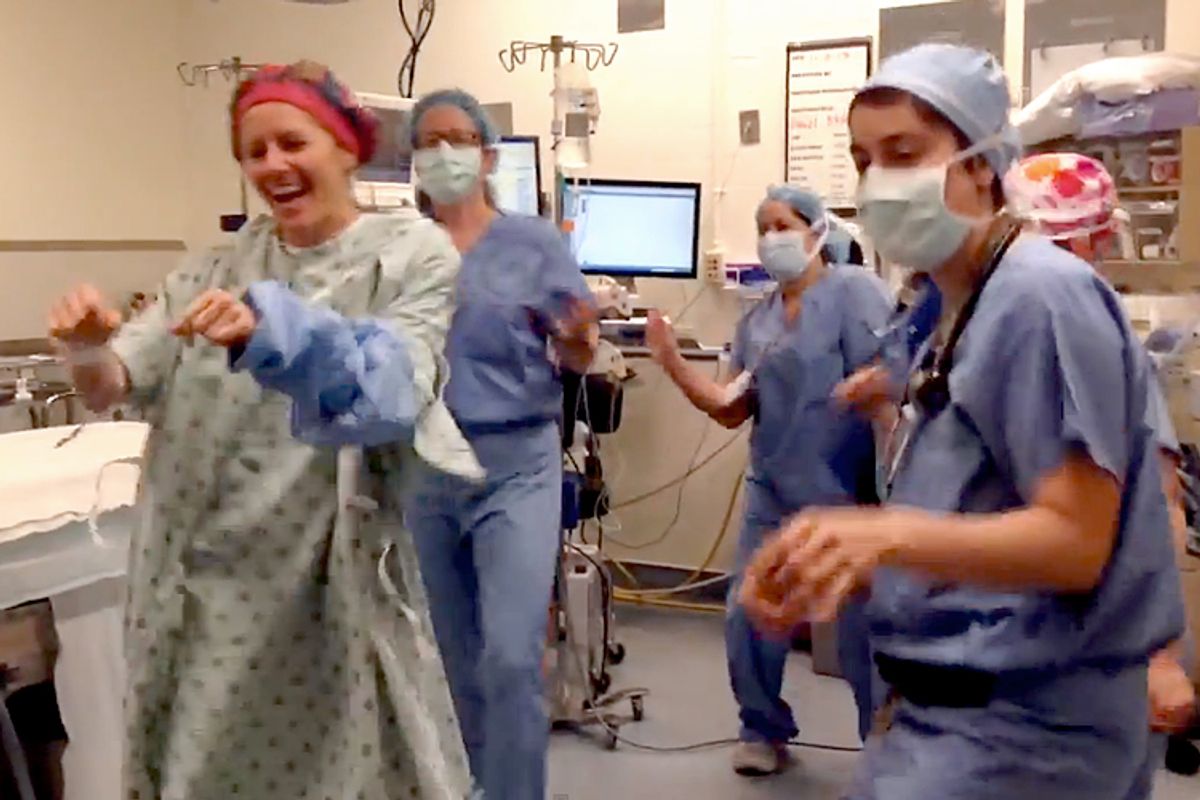 Before Deborah Cohan went in for a double mastectomy earlier this week, the San Francisco doctor and mother of two made a request. On her CaringBridge page, she asked for a virtual "Get Me Bodied Flash Mob" and explained, "My fantasy is for you to play the song and dance wherever you happen to be (in the kitchen, the carwash, subway platform [Dan!], classroom, Labor and Delivery unit, wherever!) -- ideally at 7:30am but really anytime … I have visions of a healing video montage. Nothing brings me greater joy than catalyzing others to dance, move, be in their bodies. Are you with me people?" And with her they were. On Tuesday, a six-minute video of her and her surgical team grooving ecstatically in the operating room posted on YouTube, and became an instant sensation.

Watching Cohan bust her moves, it's obvious she's a very special person, one who found herself in a difficult, stressful health situation and chose to take control of it in her own unique way. And while I don't know her, as it happens, we have a friend in common. Our mutual pal told me Friday the video was very much in keeping with the Cohan she knows, a woman with a lively personality and a famed love of dancing. And it was also, my friend notes, the act of a woman who is herself an OB-GYN and is comfortable and familiar in operating rooms.

Yet the moment it went up on YouTube, Cohan's successful flash mob became not just one woman's experience – it became exactly the kind of cheerful cancer story that looks great at the end of the evening news or as the lead on a buzzy site. That's not Cohan's doing. But it's a problem nonetheless. Overnight, Cohan has become a mastectomy role model. Her very specific response to her experience has become a moral lesson for the rest of us. And why? Because unlike how the vast majority of people facing surgery respond to it, what Cohan did makes other people feel good. E!'s John Boone called her a "brave" woman with an "inspiring" video and said, "If Deborah Cohan felt scared before her double mastectomy surgery, she didn't let it show. If she was feeling angry or depressed or any number of other justifiable emotions, she didn't let them show, either." The Inquisitr challenged, "Everyone is smiling, including Deborah Cohan and just having a good time. Could you do it?" And Today.com cheekily asked, "What do you do before a double mastectomy? Dance, of course." You know what, Today? Blow me.

When the public conversation around an exceptional act becomes a culture-wide moral assessment of it, it sends a powerful message to the many mere mortals out there. "Could you do it?" That's like saying, "Marion Bartoli won Wimbledon – could you?" And it's especially demoralizing when these judgments about the best way to handle disease and radical surgery are directed at women, who are repeatedly and effusively praised for following a very narrow narrative of response. It all fits the neat pattern of what our culture wants from its females – especially those with cancer. It wants them to be pink and funny and upbeat. Sure, some of them – like Cohan – will be funny and upbeat because that's who they were to begin with. But not all of them.

When I had my surgeries, I wasn't brave. The first time, when they were cutting a tumor off my head, I was so cold and so scared and so shocked at seeing the inside of an operating room for the first time, I almost fainted. The surgical staff had to help me, shaking like a leaf, on to the table. The second time, when they were about to go into my lung, the last thing I remember before the mask went on was the sensation of tears sliding into my ears. So if you're looking for inspiration, don't look at me.

I have friends with cancer who've thrown big, drunken pre-chemo head shaving parties. I have friends who stoically went into their mastectomies without telling their children or their employers. I have friends who spiraled into depression and ones who didn't want to talk about it and ones who were defiant and angry. And when the widely disseminated message is that it's laudable to not "let it show" if we're scared or freaked out or ticked off, it limits and confines all of us – something no one facing serious illness needs.

On her blog Thursday, Lisa Adams, who has metastatic breast cancer and writes about it better than anybody, said, "You want to shake your booty to Beyonce before you go off to dreamland for cancer surgery? If your surgical team feels it doesn’t compromise anything about the environment, go for it. But why a video of this goes viral and everyone cheers 'Awesome! Brave!' … well, the implication is that if you didn’t do that as you went in to your double mastectomy, you’re not awesome. Or brave…. Videos of dancing patients reinforce putting a carefree, happy face on a disease that — even if detected early– still has a 20-30% chance of metastasizing, sometimes decades later."

Cohan told KTVU Wednesday she's now "doing great," and I hope that she and her family have nothing but good health and dance mobs ahead. Meanwhile, next week, a friend who recently had an ovarian cancer recurrence is going in for her surgery. Like Cohan, she's a one in a million woman. She's one of the wisest, kindest people I've ever known. But she has no plans to do a flash mob. Because when you get cancer, it's your party. And as Men Without Hats once wisely said, you can dance if you want to.