My dad gave me "Fear of Flying" at 15, and it wasn't the sex that shocked me 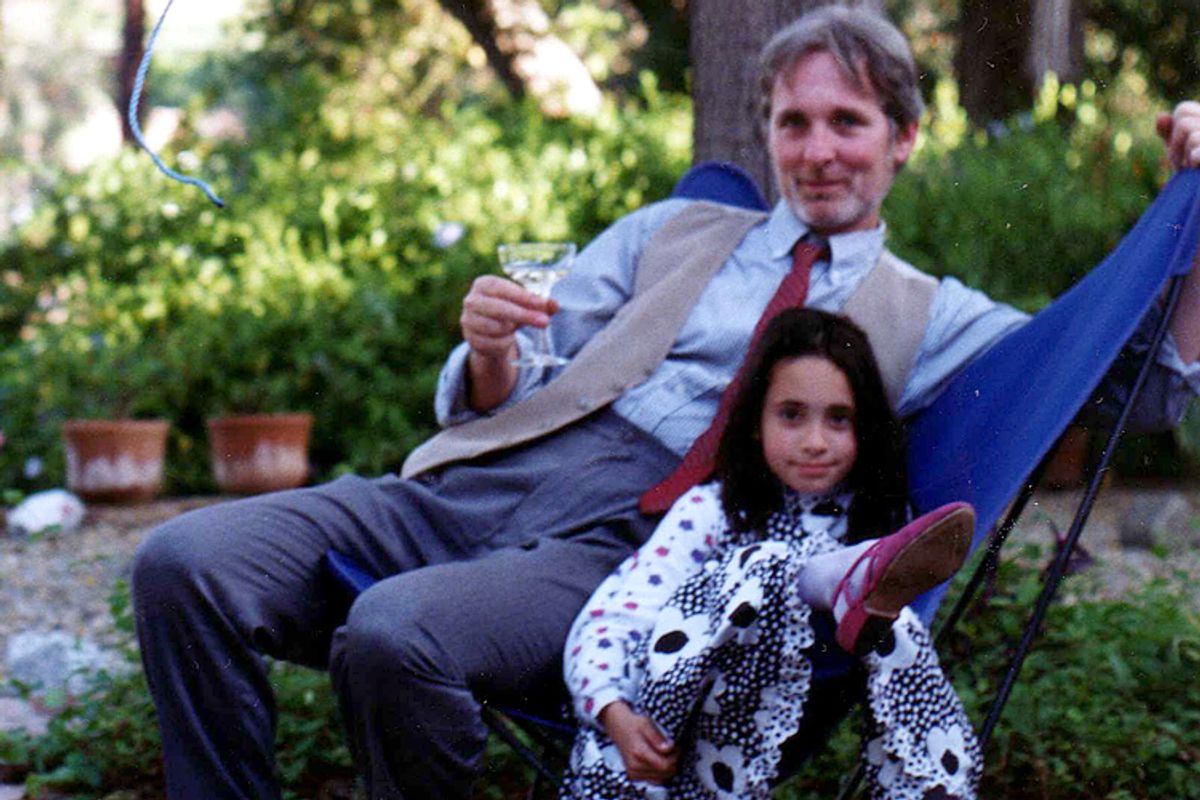 A photo of the author, as a child, with her father.
--

When I was 15, my father gave me a copy of "Fear of Flying." The book was actually one of a three-volume vintage set that included "The Bell Jar" and "Diary of a Mad Housewife" – a heavy trinity to lay on anybody, let alone an unsuspecting high school sophomore.

The head-scratching conundrum of how to be a woman had already presented itself, what with the sexually adventurous girls being slapped with scarlet letters and the not so sexually inclined being labeled “prude whores.” Even by 10th grade, it was obvious that you couldn’t win.

My father, a “good boy” of the 1950s turned 1960s free spirit, much like Isadora Wing, and a baby boomer like Erica Jong, had known many an Isadora in his day. To echo Allen Ginsberg, my father had seen the best female minds of his generation destroyed by patriarchal madness, starving hysterical naked as they found themselves in marriages in which they had no voice, with children they hadn’t wanted, and with education and passions squandered for the sake of making everyone comfortable. Even those who had come out the other end on their own terms, family friends who I would come to know as Thanksgiving guests, seemed to carry a sort of mental trauma from the 1950s, nervously folding their linen napkins when my 9-year-old self would ask if they actually wore saddle shoes or if they lived like Audrey Hepburn.

It was a different time, they would say, and leave it there as I idly stirred about the applesauce.

But despite my affinity for oldies radio stations, I never knew the 1950s as “the good old days” in my house. My father told me that the era had since been greatly romanticized – a sentiment I later encountered again when reading through a Camille Paglia interview in college.

“It was a very confusing time to be alive,” was all he would tell me when I was a kid.

Much like Isadora, half of the privileged women he knew ended up on therapists’ couches four days a week with the problem that had no name. The other half went screaming in the other direction, defying convention with modeling contracts or acting stints far away from their overbearing parents and the never-yielding mantra of marriage and babies.

But even they didn’t win.

Haunted by abortions that they weren’t supposed to talk about or children they were pressured to put up for adoption, the 1960s had been no kinder to them. The cultural allowance for women’s experiences never seemed to include their biology, aside from producing a healthy a child. So the decision to not parent wouldn’t make it any farther than their local consciousness-raising circle -- another secret for the kitchen, another rumor to be ashamed of.

“I don’t know a single woman who aborted or adopted out and wasn’t profoundly affected,” he had said once while driving me to school as a teenager, a word of warning.

Such were the themes I was confronted with at age 15 when I began my unofficial Women’s Studies 101 course with Erica Jong, Sylvia Plath, and Sue Kaufman. I tore through the volumes as you do when you’re a young teenager and you’ve heard the names “Sylvia Plath” and “Erica Jong” before but you’re uncertain exactly where.

I remember eating up Sylvia’s bell jar metaphor for depression – already becoming a problematically glamorous disease by my 10th grade year – and agreeing emphatically that all her suitors sounded boring. I remember being taken aback when Sue Kaufman’s protagonist admitted that she didn’t particularly like her spoiled daughters, a notion that scandalized me far more than any lurid sex scene. I read "Fear of Flying" last.

Despite my penchant for metaphors, I interpreted the notorious “zipless fuck" simply at face value – the literal non-removal of clothes for sex – a detail I had gleaned from movies that depicted passion so heated that there was little time left for undressing. Having yet to have a physical relationship with anyone (I had my first boyfriend at 12 and he was only permitted to hold my hand), much of the book puzzled me. Like why Isadora would want to sleep with a man who had filthy toenails – a deeply unsavory image that haunted me through college. Or why she would leave her husband for somebody she didn’t even seem to particularly like. Or why she would put on a full face of makeup just to go write.

Needless to say, much of the book went over my head. But the triple punch of transgressive lady narratives left a searing imprint on me, through which I started to identify and develop a vocabulary for deconstructing the mythologies of womanhood – all sanctioned by culture, by history, by advertisers.

More immediate than the dawning of my own feminist consciousness, though, was the arresting feeling of being confronted with what I did not want to be. Finishing the last volume, I remember wandering about my house in an odd contemplation of those essential archetypes: the depressed college girl who wants to be more than a mother (or a stenographer), the brilliant twentysomething who despite her academic prowess still can’t achieve respect from her male peers, the frustrated housewife who embraced convention and wound up in an abusive, loveless marriage. The thread that undoubtedly ran through them (aside from privilege) was a cultural hatred of women – a nefarious element I later learned to identify as sexism. But each novel so distinctly distilled a milestone in a woman’s timeline that I was immersed in a deep sense of foreboding. That even if I finished college, even if I obtained a career I was dedicated to, even if I chose to marry, even if I had children, I wouldn’t be able to outrun sexism. It would always be waiting for me, looking to grab me from under some metaphoric stairs or in some darkened corner just when I thought that I was safe.

I never discussed "Fear of Flying" with my father upon finishing it, my stomach clenching at the mere thought of talking around the rather pronounced presence of “fucking” and penis descriptions. I had fallen so deeply down a much more existential abyss of feminist awakening that frankly none of the graphic sexuality preoccupied me.

But many years, a college education and much feminist contemplation later, I see that he just wanted me to know that the game was rigged, that everyone was lying, that there was so much more to being a woman than what society said there was. And just as importantly, I can see him on the other side of Isadora’s fevered madness as she hops from country to country in rumination of her next move. I can see my father helplessly looking on as the women he knew and loved unknowingly acquiesced to cultural demands and then raged in silence.

He couldn’t help me escape sexism. But in giving me "Fear of Flying," he wanted to make damn sure that I knew what it looked like.