The U.S. government can't afford to offer decent postal service. But Jeff Bezos can. This is wrong 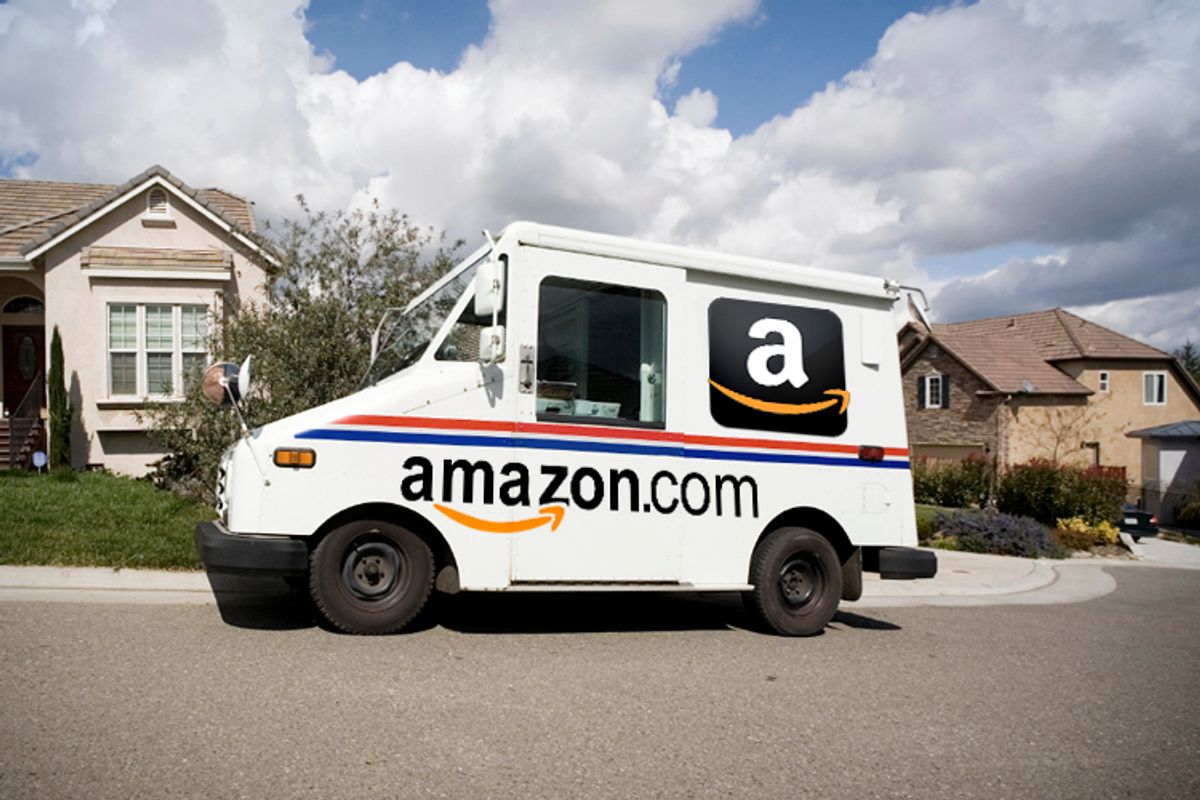 "Every day is now an Amazon delivery day." So says Dave Clark, Amazon’s vice president of worldwide operations and customer service, announcing a deal with the United States Postal Service that will allow the delivery of Amazon purchases on Sunday.

Clark is guilty of some exaggeration. To qualify, you must be a member of Amazon's $79-a-year Amazon Prime program. And when the service begins on Nov. 17, it will only be available in New York and Los Angeles, though there are plans to gradually expand to other cities. But the gist is clear: Amazon's message to everyone who has lived through the hell of waiting until Monday for delivery of a purchase is straightforward: Your nightmare is over.

Maybe so, but my nightmare is just beginning. Some may cheer the news that Amazon's commitment to ultimate consumer fulfillment will not be denied by any so-called "day of rest." But the spectacle of Amazon Sunday also manages to capture, in a tidy package delivered right to everyone's doorstep, both the ongoing collapse of government and the subservience of everything in our society to the unnecessary satiation of consumer desires. Sound the heretic alarm! Guess what? We don't need Sunday deliveries. We really don't. But we do need a functional government.

Wasn't it just the other day we were hearing that the USPS would cease deliveries on Saturday? (Congress, for the moment, has squashed this idea.) Now here's Amazon to the rescue! Terms of the deal haven't been released, but you'd have to guess that Jeff Bezos is paying a tidy sum to get mail carriers out and about on Sundays. The lesson offered is pathetic. The U.S. government can no longer adequately fund the postal service. But Amazon can!

I suppose it's not quite accurate to lambaste the provision of a new delivery option as yet another example of the relentless ongoing privatization of public services. But it is still unsettling. Amazon's obvious goal is to get more Amazon Prime signups. What Sunday deliveries by the USPS really mean is that a government service is being co-opted as part an Amazon marketing campaign. I don't think this is what Ben Franklin had in mind.

But we get packages on Sunday, so it's all good, right? Because what the consumer wants is best, right? Because success in the current era of capitalism is fundamentally predicated on consumer bliss, right?

Well, what about the workers? The Wall Street Journal reports that the USPS won't have to hire any new workers to provide Sunday deliveries.

...[O]fficials have been working for more than a year on a "flexible" workforce that could be asked to clock in on Sundays. "We're ready for Sunday in the current markets," the spokeswoman said. "If this were to expand, we would look at staffing levels and adjust accordingly.

OK. So postal workers now don't get Sundays off so that we can get new backpacks for our kids in time for Monday morning school. Fair trade!

In Brad Stone's recent book on Amazon, he makes it abundantly clear that, by and large, working for Amazon sucks. Why not spread that model throughout the entire economy? In the future, there will be two economic classes. The people accepting their Sunday morning Amazon deliveries, and everybody else, slaving to make sure that the doodads get there on time.

I will almost certainly take advantage of this new service. As a red-blooded American I am all about instant wish fulfillment. And in the not-so-distant future, when I am 3-D printing my online purchases after instantaneous digital download, this whole notion of waiting even for a Sunday delivery will no doubt seem quaint.

But we're losing something here. There are precious few moments in our lives right now when we are allowed to rest, when we can bask in the knowledge that the clock is off. Our smartphone-enabled, super-connected lifestyle has been chipping steadily away at the notion that there is any solid demarcation between work and play, or any refuge from digitally delivered pressure.

Once upon a time, Sunday was a space in which that frenetic assault backed off.

No longer. Just imagine. You could be lying in bed, listening to this and get interrupted by a knock on the door from your U.S. Postal Service Amazon sub-contractor.

"Watch out, the world's behind you." Indeed.