How to make a Jane Austen reboot that's actually good

Austen adaptations are everywhere, from "Longbourn" to "Mr. Darcy, Vampyre." A Web series shows how to do it right 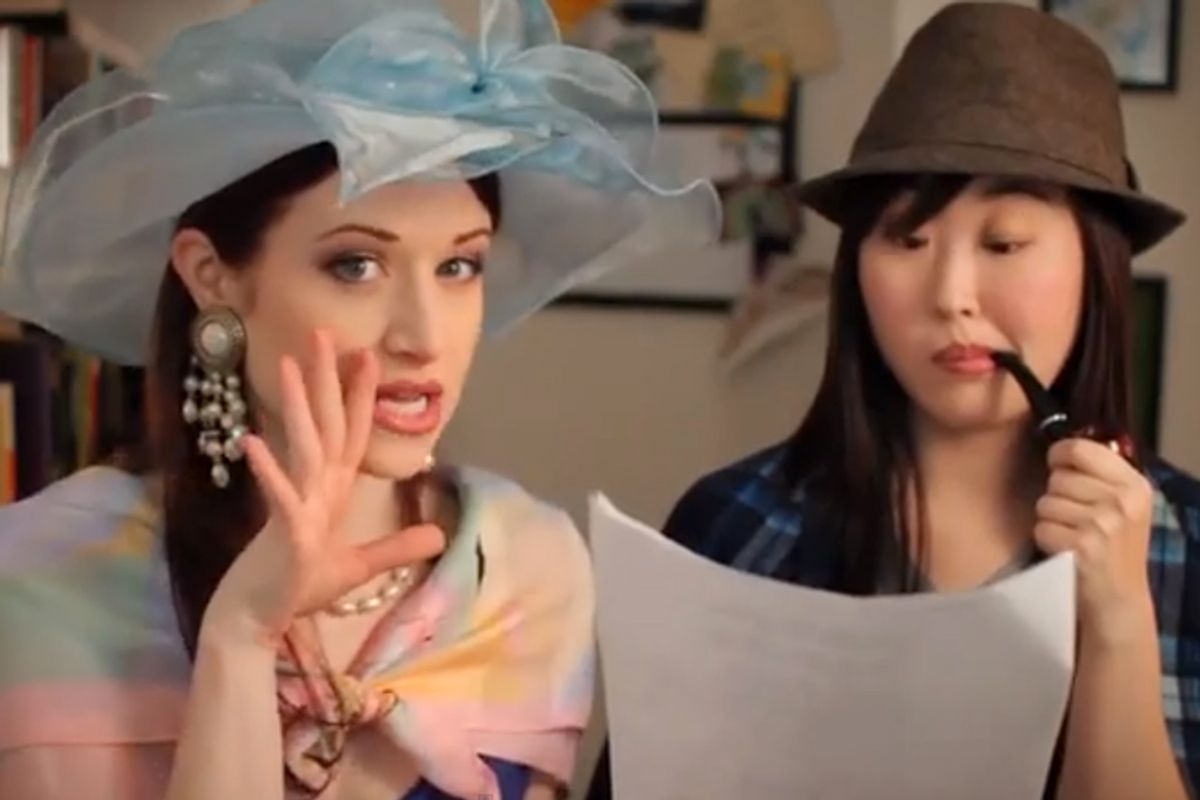 Ashley Clements and Julia Cho in "The LIzzie Bennet Diaries"
--

The law of cultural fads should have ensured that Jane Austen-mania, christened in the '90s when Colin Firth as Mr. Darcy dunked in a lake, would fade and make way for another literary obsession. But instead, the empire of Austen has only expanded since then, absorbing genres like chick lit, paranormal romance and zombies into its fold -- with titles like “Me and Mr. Darcy,”  “Pride and Prejudice and Zombies” and “Mr. Darcy, Vampyre.” Austen has proven to be the Shakespeare of the intimate, with most of her six novels serving as reliable blueprints for romantic comedies with heart, easily transferable to Boca Raton, Mars or Bollywood. And it doesn’t hurt that she sells copies. As a result of all this, Austen straddles the role of literary foremother, fan-fiction inspiration and commercial brand.

Recently the Austen juggernaut has returned to its roots with novels and Web series that take a deeper, more sophisticated literary approach. Maybe this more mature phase of Austenmania is due to the success of P.D James’ highbrow 2012 sequel to “Pride and Prejudice,” “Death Comes to Pemberley.” Or perhaps it’s a backlash against the plague of Regency zombies and ghouls. But the loftier ambitions of these new Austen projects raise the question: What, beyond gimmickry, makes a work that is essentially fan fiction an artistic success? What will give readers value beyond amusing twists like Elizabeth Bennet vlogging, Marianne Dashwood hopping into Mr. Willougby’s sports car, or a servant emptying Mr. Collins’ chamber pot?

The latter moment occurs in "Longbourn," a new historical novel by Jo Baker, which tells the story of “Pride and Prejudice” from the perspective of the Bennet family servants, reminding us that the spunky obliviousness to dirt shown by Lizzy Bennet makes extra laundry for the folks downstairs. Think Occupy Austen. The same month that “Longbourn” appeared, "Sense & Sensibility" (yes, that’s the title) by Joanna Trollope hit shelves as the first installment of “The Austen Project” -- a series of rewrites by novelists including Curtis Sittenfield and Alexander McCall Smith. Trollope’s “Sense” is incredibly faithful, keeping character names intact and staying on location, but with modern technology: Estates remain estates (although one is now an estate for recovering addicts), London stands in for London, and ditto for romantic encounters in the British countryside. Along with these new novels, there’s a new breed of Austen adaptations for the youth: "The Lizzie Bennet Diaries" and "Emma, Approved" are Web series that depict Austen's heroines as Internet oversharers, divulging stories through YouTube videos with real-time tweets helping out. These virtual retellings may be hip, but in some ways they are the most respectful homage of all, thanks to their clever narrative devices, emotional highs and lows, and winks at fans of Austen’s work -- "Kitty Bennet" shows up as a cat, for instance, and in the midst of the modern dialogue a choice Austen line is very liable to sneak in.  It turns out you don’t need to be a book, a miniseries or a movie to do Jane Austen right. You can also be a fictional vlog.

As a Janeite, I encounter each of these new remixes anxiously. Retellings are tricky. If done well -- think “Wide Sargasso Sea” or “Rosencrantz and Guildenstern are Dead” -- we’ll enjoy the new work of art while reengaging thoughtfully with the source it’s based on. But if the project goes south, it risks being a crappy experience and clouding our perception of the original. After my husband and I read “Death Comes to Pemberley” last winter we were so irritated by its bland, insipid take on Austen’s characters that we had to binge-watch all five hours of the 1995 BBC “Pride and Prejudice,” just to get “the real” Lizzy and Darcy back in our consciousness. (I had to the perform a similar cleansing after skimming “Pride and Prejudice and Zombies,” and encountering its can’t-be-unseen images of Regency undead.)

But sometimes a new perspective on a classic can be healthy. Alas, Lizzy, I thought after reading scenes in “Longbourn” during which Lizzy thoughtlessly makes her housemaid Sarah’s backbreaking work harder. The novel’s counter-narrative shows that the precarious position of the unmarried women in Austen’s novels trickled down to those who served them. The threat looms: If the Bennet daughters don’t marry well, the household staff could lose its livelihood, its home. And each marker of status in Austen’s world, from white dresses to “family dinners,” taxes the servants’ labor -- the extra burden below stairs signifies the family’s gentility.  Unlike “Pride and Prejudice and Zombies” or other mashups,  “Longbourn’s" disruption of Austen’s text has a singular literary purpose, adding a new layer of class awareness that complements Austen’s own economic commentary.

Often, though,  Baker’s effort at “rewriting” the characters to show their privilege feels didactic -- we get it, they’re enabling the gears of oppression. And the novel’s references to outhouses and other effluvia come relentlessly, almost as though Baker is purposely trying to shock decorous Austen fans with a taste of historical reality. This poking is all very well, but I would have preferred to see ”Longbourn” respond even more to Austen thematically, zooming in and lingering on the parallels between the servants’ lives and those of Austen’s characters: their mistaken pride and false impressions among the dirty dishes. When Baker does this effectively, as when the male servant, James, takes over the diaper-washing from Sarah and she relishes a moment of relief, it’s sublime -- and it echoes the favor Darcy does for Lizzy toward the end of “Pride and Prejudice.”

I’m glad I had my consciousness raised by “Longbourn,” because it enabled me to be extra critical when I read Trollope’s “Sense & Sensibility,” which is posher than Victoria Beckham, chock-full of fancy cars, iPods and enviable real estate. The problem with this kind of one-to-one retelling is this: It’s impossible to feel the same deep pity one feels for a family of women kicked out of their home in Regency England when the self-same clan is vacating their estate in contemporary Austerity-beleaguered Britain. It’s not fair, but it’s also not putting them on the precipice of social ruin. Said ladies having practically zero earning potential in our liberated era feels less forgivable, too. By the same token, a major Austen plot device, a man nobly keeping his word to a girl he said he’d marry as a teenager, feels so 1813.

That’s why, though Trollope’s writing is zippy and engaging, the painstaking fidelity of her update has a smothering effect. She should have fudged Austen’s plot further, especially in areas where Austen's social rules no longer apply. Whenever Trollope does take liberties with Austen’s world, as in a moment when Edward Ferrars, freed from his Austen-imposed honor, utters a very unfeminist slur at someone who deserves it, it feels like a breath of fresh air cut off too soon. Aside from moments like this, there’s little value in reading a book with all the exact same characters and plot twists as an Austen novel when you could read the original, which features prose by a noted genius, after all.

If “Longbourn” is the porridge that coldly chastises Austen and “Sense & Sensibility” is too warmly attached to its predecessor to breathe, then “The Lizzy Bennet Diaries” (followed by “Emma, Approved,” still ongoing) is just right. That’s because the video diaries play gleefully with a limited perspective, exactly as Austen’s narrative often does. First we viewers can access only our vlogging heroine’s point of view, but as her friends and acquaintances begin making cameos in her videos and tweeting, we -- and eventually, she -- apprehend how she’s misinterpreting her situation, her relationships and herself. This growing awareness of a larger world, and other people’s experiences in it, is quintessentially Austen, more than any direct analogies about real estate. The video diaries are full of in-jokes and references to the novels, but they also explore between the lines. Most memorable are the extended scenes of Lizzy Bennet interacting with her teenybopping, selfie-abusing little sister, Lydia, which allow us to experience prejudices and judgments as they simmer, bubble and get resolved not just romantically, but between two siblings.

Perilous finances and landed gentry are represented in these episodic tales more inventively, via student debt and tech start-up venture capital, respectively, while diversity of race and sexual orientation is a given. Some of the updates are more clever than others, but the best part of the series may be what it leaves to the audience. Costumed reenactments of off-screen scenes, alternate video diaries filmed by other characters, as well as tweets and Tumblrs posted in tandem with the videos, turn the viewing experience into a “reading” experience, with fans asked to go back and forth between different media and draw inferences and make judgments on their own. It’s enough intertextuality to make even the most academic Janeite geek out, while the fan-girls will surely squeal at Darcy’s tantalizing first appearance, only from the neck down, after dozens and dozens of installments.

I have complete sympathy for the urge to respond to a favorite work by creating further adventures for  its characters (I confess: I have my own attempt at a modern retelling of “Persuasion” sitting in a drawer). Austen books, with plots that mostly rely on human folly and financial bad luck to motivate their engines, remain ripe for fan fiction, both professional and amateur. But the success of “The Lizzy Bennet Diaries” where two hefty novel projects are less surefooted is a reminder that a successful update of a great work needs to do more than directly dialogue with it. It also has to find new and exciting ways to engage with the author's prose, her narrative technique and her insight into how we relate -- and even add further insight. Ultimately, the best tributes to Austen out there might not even use her name as a branding opportunity, but rather just take her lead in writing stories that reveal our blindnesses and our ability to connect despite them.