He claims his slurs "came from a place of love" 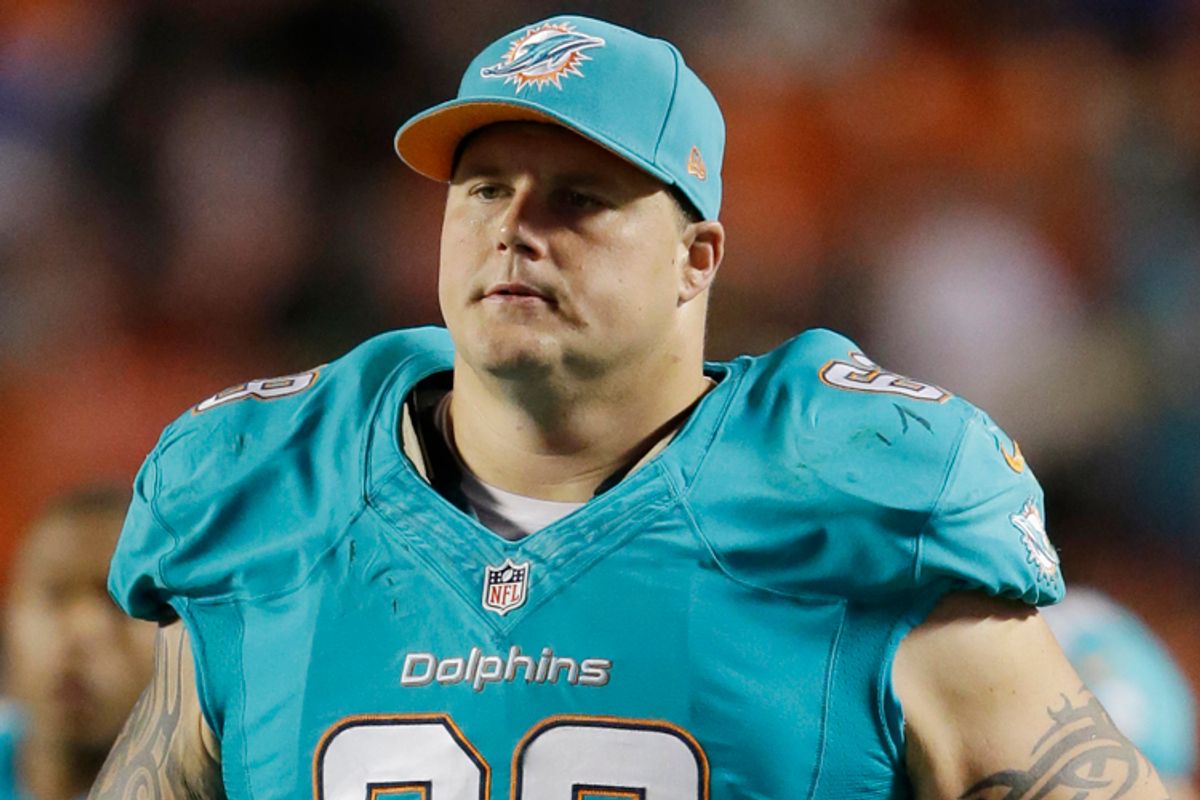 In late October, his fellow Dolphin, offensive tackle Martin, went on leave for "emotional issues" -- and soon after, Incognito was placed on indefinite suspension  over "allegations of player misconduct." Incognito has admitted that in April, he left Martin a voice mail in which he called him "half n----- piece of s---" and told him, "F--- you, you're still a rookie. I'll kill you." He also allegedly sent Martin texts that "included derogatory terms referring to the female anatomy and sexual orientation." But in an interview with Fox Sports this weekend, Incognito insisted it was all just friendly locker room-style banter.

"When words are put in a context, I understand why a lot of eyebrows get raised," Incognito said Sunday. "But people don't know how Jon and I communicate to one another. For instance, a week before this went down, Jonathan Martin texted me on my phone, 'I will murder your whole f------ family.'" Incognito's lawyer then tweeted out the alleged explosive message, with the command, "U decide." It was a photograph of a smiling woman and a dog, with the words underneath. Context, indeed. As a message between players before a game, it looks for all the world like a joke. "Now, do I think Jonathan Martin was going to murder my family?" asked Incognito. "Not one bit. He texted me that. I didn't think he was going to kill my family. I knew that was coming from a brother. I knew it was coming from a friend. I knew it was coming from a teammate." So, given that apparent spirit of fraternal dishing it out, given that Incognito says the N-word is "a word I've heard Jon use a lot," could Incognito's message to Martin have been the same?

Though Incognito insists, "You can ask anybody in the Miami Dolphins' locker room who had Jon Martin's back the absolute most, and they will undoubtedly tell you [it was me]" and that "to judge me by that one word is wrong," he also backhandedly acknowledges that maybe he took it too far. "In no way, shape or form is it ever acceptable for me to use that word, even if it's friend-to-friend on a voice mail ... It's thrown around a lot," he says. "It's a word that I've heard Jon use a lot. It's not saying it's right that I did it and used it in a voice mail. But it's a lot of colorful words that are being thrown around in a locker room that we don't use in everyday life. All this stuff coming out, it speaks to the culture of our locker room, it speaks to culture of our closeness, it speaks to the culture of our brotherhood. And the racism, the bad words, that's what I regret most. But that is a product of the environment." In other words, it's really bad and he shouldn't have done it but it just proves how close they were and, um, environment!

Not every work environment has a 100 percent politically correct atmosphere. If you've ever worked in the military, a newsroom, a theater, a political campaign, a hospital or a restaurant kitchen – just to name a few examples – you've probably heard and maybe even said things that would shock the assembly at the family Thanksgiving table. In competitive, intense, high-stress environments, sometimes a little tension-defusing bluster and foul language can even be healthy.

Yet it's easy to go from a culture of camaraderie to one of intimidation. Whether you approve of the language or not, there's got to be a difference between the jovial "Pass the f-----n' turkey, c--------r" of "Kitchen Confidential" and the "F--k you, f----t" of Chicago Bulls center Joakim Noah. And as a  Twitter commenter replied to Incognito's attorney this weekend, "You really think sending a text like 'hey look at this funny meme' gives enough reason to call him [the n-word]?" Maybe Incognito honestly never learned that. Maybe in his mind, "half n----- piece of s---" is his way of saying "I love you, man." Maybe he truly believes that you can use racist slurs and not be a racist yourself. Maybe Brad Paisley was on to something.

But if you want to talk about context, you have to really look at context. You have to understand how words have been used historically to degrade and hold back. You have to understand that when the standard go-to form of attack, again and again, is to deploy a racial slur or imply a person is gay or a girl, that it is coming from a place of power. It doesn't say, "Ha ha I'll destroy you." It says, "Remember, I'm white and you're not." It's not that innocent, not even when you're saying it to a man you call a "brother."