"Sons of Anarchy" is the most sexist show on television

Even the most visible women on the series are basically afterthoughts -- or evil, back-stabbing villains 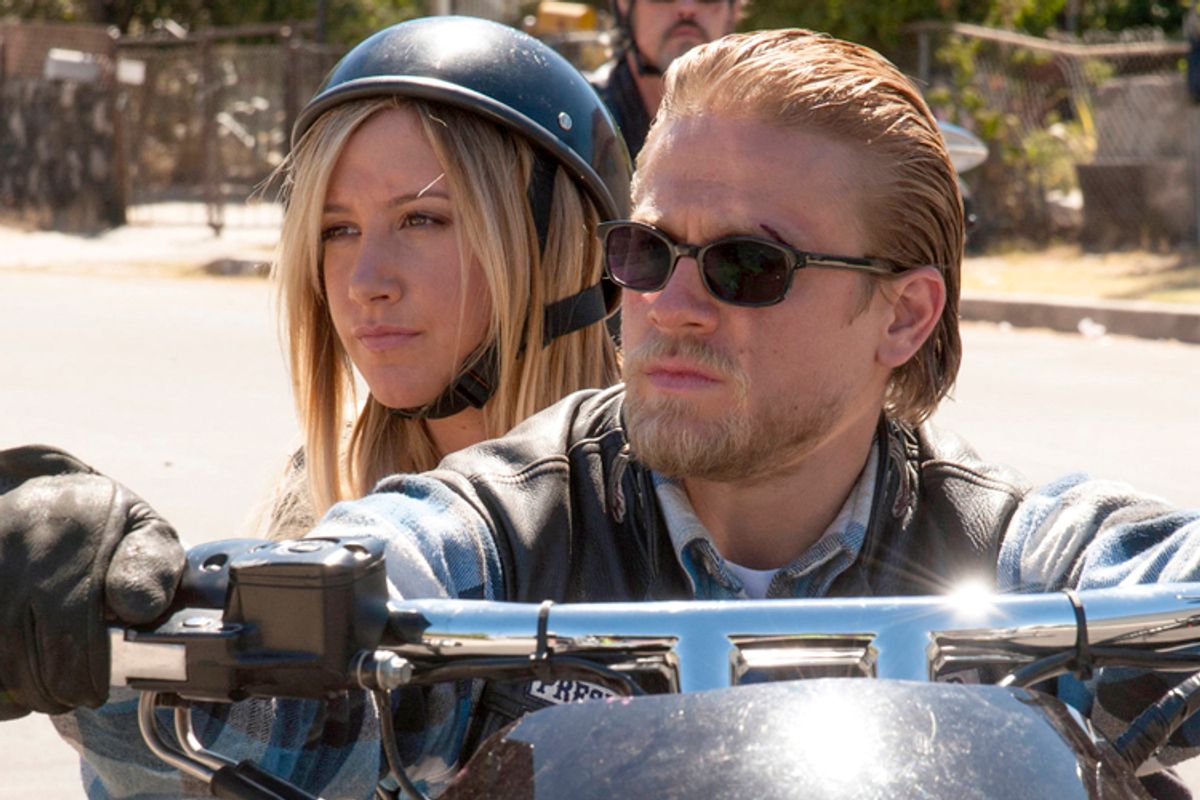 With an all-star cast and a heart-pounding story line that chronicles the rough life of the SAMCRO motorcycle gang, it’s easy to fall in love with Kurt Sutter’s wildly popular show, "Sons of Anarchy." But while "SOA" is one of the most watched programs on television, could it also be one of the most sexist?

"SOA" follows club President Jax Teller as he leads his all-male clan of hardened Harley-riding, gun-toting criminals around the sleepy town of Charming, California - a fictional city steeped in violence and corruption. Women are present in the show, but are mostly there to provide sexual gratification, take the fall when the men get into legal jams, and at times be their human punching bags – all with the hopes of proving their worth to possibly become an “Old Lady.”

But don’t expect to see these women riding on any motorcycles of their own. Not in this world. An “Old Lady” in the land of SAMCRO is the highest title a woman can attain. It cements her position in the club, giving her slightly more privileges than a house pet, though she is still considered a mere afterthought and is not in any way an integral part of the club’s operations.

Gemma - the queen bee of the “Old Ladies,” and Jax Teller’s overbearing mother -  is a cutthroat woman who will do whatever it takes to keep SAMCRO in one piece. Gemma has some endearing attributes, but she’s mostly portrayed as an irrational, emotional, power-crazed back-stabber who uses her position to get what she wants – which is normally complete control over her son.

Tara, Teller’s wife and the brunt of Gemma’s constant manipulation, started out as a sweet and loving well-to-do doctor who fell in love again with her childhood flame. As the show has progressed and Tara has been put in compromising positions for the club, she has changed, but not in a positive way.

Instead of portraying Tara as a strong woman who wants out of the club, the show has turned her into a mirror of Gemma. Just as manipulative, slimy, and as cunning as her mother-in-law, Tara created an elaborate plan to fake her pregnancy and the subsequent miscarriage after falsely accusing Gemma of kicking her in the stomach. Because all women do things that crazy, right?

Even women outside the club, and on the right side of the law, are shown in a negative light. District Attorney Tyne Patterson is a tough as nails and utterly crooked prosecutor with a vendetta against SAMCRO. She bends and breaks the law to suit her needs with blatant, self-righteous justification. Here was another opportunity for the show to portray a powerful, level-headed woman -- instead, Patterson became yet another monster.

Now if you’re not a stone-cold, evil villain of a woman in Charming, then the only other spots for you are drug addict or escort/prostitute. SAMCRO solidifies this notion when they attempt to steer their club away from illegally running guns and towards a more “legitimate” direction, putting their stock in a local whorehouse. “It’s safe to say SAMCRO’s future is in pussy, not bullets,” Jax says to his crew.

You could say the show is meant to be a reflection of the motorcycle gang culture, which may itself be sexist. But even so, “Sons of Anarchy” has the opportunity to rise above any culturally-entrenched sexism. Instead, the show continues to miss the mark by keeping women boxed into stereotypical roles.

As "SOA" continues to entertain viewers with only two seasons left, will these sexist undertones persist, or will they give way to more nuanced characterization? Regardless, as a women, let just say I’m grateful I don’t live in Charming.

Valerie Tejeda is a writer who has contributed to a variety of different publications, including but not limited to: The Huffington Post, Yahoo! Shine, The Fix, Latina, Cosmopolitan.com, Xo Jane, and The Bump. She is currently based in California where she also works towards completing her debut Young Adult novel. Follow her on Twitter @val_tm.