Why is pro sports constantly jamming military fervor down our throats? Their claims are wrong in more ways than one 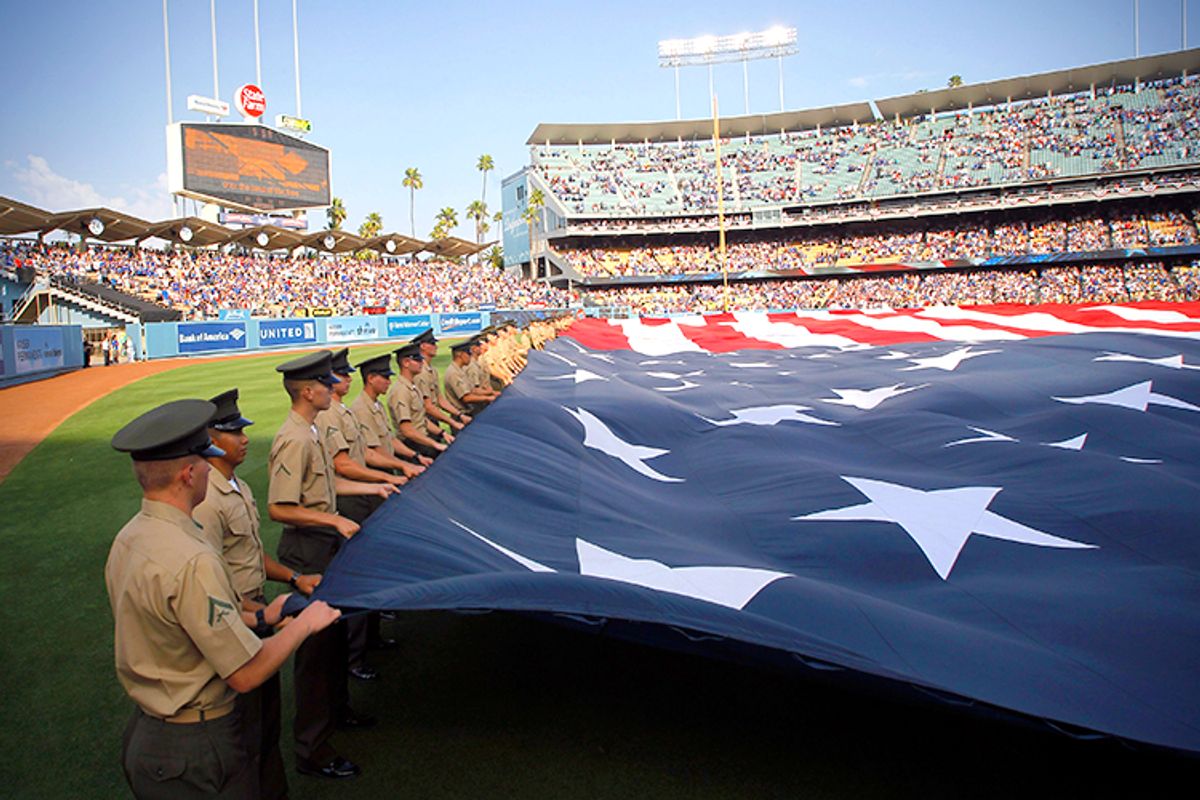 The millions of Americans who regularly watch nationally televised NBA games are, by now, familiar with the "NBA Cares" commercials that run quite frequently during the season. The series of promos is meant to illustrate the league's commitment to serving the community in a variety of ways. One particularly touching example involves a collaboration between the NBA, the V Foundation and St. Jude Children's Research Hospital; in the spot, several prominent players are shown visiting children stricken with cancer, many of whom look genuinely thrilled to be meeting their heroes. The league deserves credit for encouraging its players to put their fame to good use by bringing some badly needed joy to these children's lives.

Not all of the "NBA Cares" promos are about serving the least fortunate members of our society, though. The league is determined to show its commitment to both ends of the spectrum of power. In one spot, NBA stars can be seen, not playing board games with children devastated by cancer, but, instead, touting the greatness and indispensability of the most powerful institution in the world, the United States military.

We discover that Brooklyn Nets star Paul Pierce is incredibly grateful, at a deeply personal level, that the men and women of the U.S. military are willing to "protect" him and his country ("I'm so thankful that they are able to do that for me, to make this a safer place for me to live"). Roy Hibbert, starting center for the Indiana Pacers, sees Pierce's gratitude and raises him in a big way, making the latter's sentiments seem woefully weak by comparison:

This is just an extraordinary sentence. It contains three distinct, factual claims. While the first two are highly debatable, let us suspend consideration of them in order to focus on the third, which is actually an outright falsehood. Not only does Hibbert confidently assert that "we wouldn't have freedom" were it not for the beneficence of the U.S. military, but that this is "obviously" so.

Freedom has become one of those politically charged terms that means whatever people need it to mean. There is no coherent conception of freedom, though, in which it only exists at the pleasure of the U.S. military. It's simply a non sequitur. The "freedoms" most Americans think of when they hear the term are enshrined in constitutional and statutory law. They are in no way dependent on the size, scope or even the existence of the U.S. military. If John Lennon's ghost assumed dictatorial control of the U.S. government tomorrow and, as his first order of business, disbanded the entire military, Americans' "freedoms" would not suddenly vanish.

Other than military promotion, there is no other conceivable context in which an athlete, officially representing a major professional sports league, would go on television and say something that is so bizarre, explicitly political and manifestly untrue. Whether Roy Hibbert was simply reading something that was handed to him, or expressing his own sentiments, is immaterial. What is problematic, in any case, is that this peculiar, nonexistent connection between "freedom" and the military continues to be perpetuated as an uncontroversial truism, and is met with virtually no resistance, at least within the confines of the mainstream.

The corollary to the claim that our freedom exists only at the pleasure of the military, of course, is that the same military can revoke said freedom if it so desires. Indeed, as Hibbert so bluntly put it, "obviously we wouldn't have freedom without them." This widely held belief, that our freedom is bestowed on us by soldiers, has obvious implications for how the public views the military. One such implication of the ubiquity of this myth is that people will feel they owe boundless gratitude to the military as an institution and all the men and women who serve in it.

Often, the spectacle of public gratitude to the troops reaches comically absurd proportions. During the 2013 World Series, Bank of America, that beacon of patriotism and benevolence, sponsored an initiative called "Express Your Thanks." For each photo, message or video submitted that expressed thanks to the military, the bank donated $1 to nonprofits that support service members, veterans and their families. On the program's website, several such expressions are highlighted, including, most prominently, a message from Melissa, who, on behalf of her family, offers thanks to the troops for "safeguarding our freedom."

"Express Your Thanks" received considerable on-air attention during the World Series itself. Before Game 1 at Fenway Park, Red Sox great Carl Yastrzemski threw out the ceremonial first pitch. He was joined on the mound by three veterans, all of whom are Medal of Honor recipients. In an interview with MLB.com after the game, Yastrzemski contrasted the universal gratitude felt toward the military today with an earlier, less seemly time, when our heroes were subjected to an annoying diversity of opinion:

"In '67, you had a very anti-war thing," Yastrzemski told MLB.com after bringing the Fenway crowd to a roar. "Not right now where they're supporting our troops and things of that nature. So it's very different times."

The undercurrent of all this is that "support" and "gratitude" for the military and those who serve in it is intrinsically apolitical. It's just something that all decent Americans understand and respect. This approach serves a very important purpose, which is to further blur the lines between patriotism and support for the military. Americans of conscience who do not "support" the troops, particularly those who volunteer to fight in wars of aggression, are not allowed a seat at the table in this paradigm. Their existence is not even acknowledged, in fact. These are "very different times," in the words of Yastrzemski, and our society has progressed to the point where such shrill voices are no longer relevant.

Supporting the military, though, and expressing gratitude for what the military is actually doing around the world, are nothing if not explicitly political sentiments. To suggest otherwise is fundamentally dishonest. It reduces sincere dissent on these matters of such tremendous consequence to our culture and our politics to nothingness.

Bank of America provided American flags to each attendee of Game 1 at Fenway Park, and "asked those in attendance to wave the flag during 'God Bless America' (before the bottom of the seventh inning) as an expression of thanks to U.S. troops." It was just assumed that each one of the many thousands of people in Fenway Park that night did, indeed, feel thankful for U.S. troops. After all, who wouldn't? It is difficult to fathom a quicker path to self-marginalization than to decline participation in such a feverish expression of flag-waving and gratitude.

The combination of unanimous, entirely uncritical appreciation for the military, and the irrational belief that we owe gratitude to the troops for virtually everything we cherish in life, up to and including freedom itself, is very dangerous for our intellectual culture. It stifles any potential for rational, coherent discussion on these matters. It makes us, free citizens of a constitutional society, meek and excessively obeisant. During the World Series games, under the hashtag "TroopThanks," Americans tweeted their appreciation for the troops. One such tweet thanked the troops for allowing us to "live free." Another offered a stern "reminder" that we are only able to enjoy the World Series "because of those who protect our freedoms every day." This is, of course, preposterous, but it is hardly a fringe belief. It reflects many decades of highly effective propaganda that has convinced generations of people that there is virtually nothing for which we should not thank the troops.

The NFL, with a culture that mirrors that of the military in many ways, is always more than willing to provide a massive platform for hyper-nationalistic promotion of the armed forces. Indeed, the league proudly states that "supporting the military is part of the fabric of the NFL." This year, for Veterans Day, that "support" came in the form of an initiative called "Salute to Service," which is all about "military appreciation." Players donned camouflage gear and helmet decals honoring the armed forces. Colts quarterback Andrew Luck ran out of the tunnel during player introductions side by side with a service member, with the latter waving an American flag. As in baseball's "Express Your Thanks" program, fans were "encouraged" to "demonstrate their military appreciation."

The core message of the NFL's initiative is clearly articulated by Hall of Fame wide receiver Michael Irvin in a recent promo spot. Irvin opens by explaining that, sometimes, we must set aside the petty business of breaking down football games, and take a moment to "salute the people that inspire all of us." (As is very common in pronouncements of appreciation for the military, "all of us" are automatically consigned to agreement.) Furthermore, the ability to "get away from our world, and whatever's going on in our world" and talk about football -- "that's called freedom," in the unusual mind of Michael Irvin, and "that freedom is not free." Whom are we to thank for this? As it turns out, it's the troops! Indeed, they are the ones who "make it possible" for Irvin and his colleagues to go on television and discuss football. Again, there is seemingly no limit to the scope of human activity that many of us sincerely believe would not be possible were it not for the military's selflessness.

We need not thank the troops for every breath we take. When we do, we reduce our entire existence as free people to something that only exists at the whim of the U.S. military, and suffocate critical thought about the military and what it's actually doing in the world.