Republicans are nullifying vacancies on a key law-making court so they can subvert the law. They must be stopped 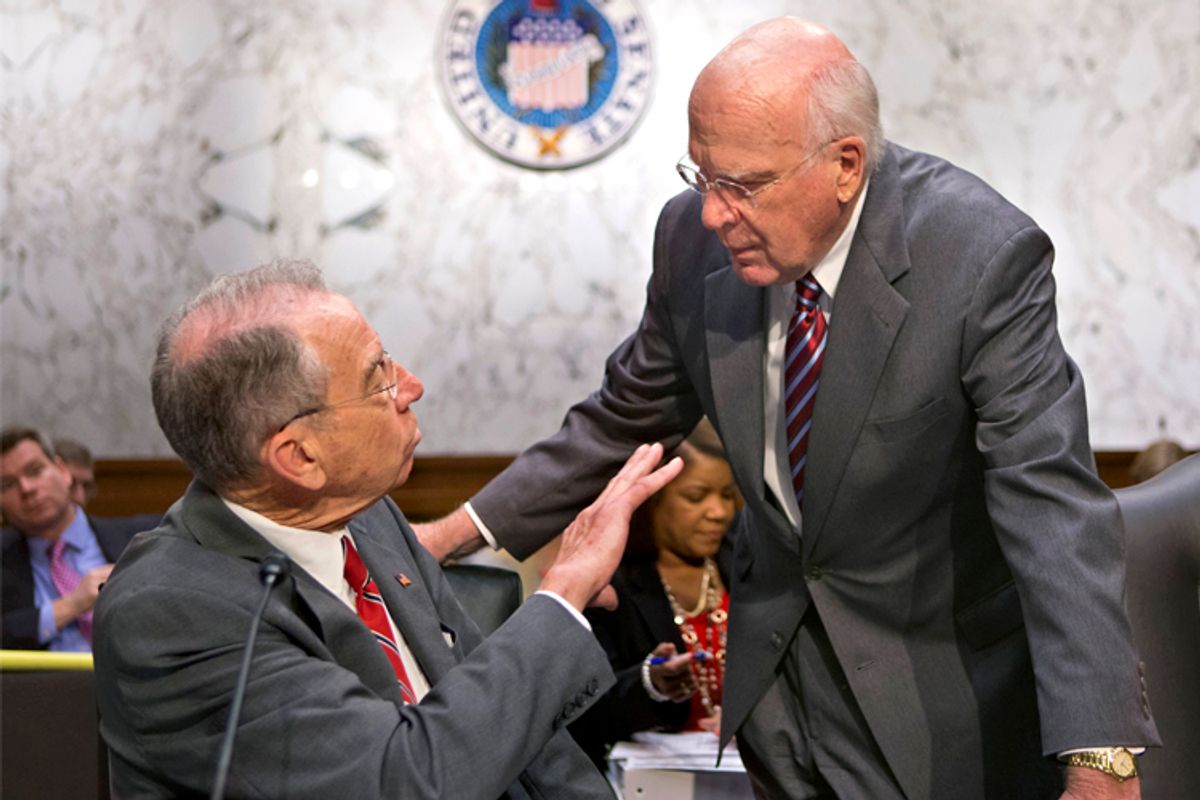 When last we checked in, Senate Republicans were vowing to effectively nullify three vacant seats on the ultra-powerful D.C. Circuit Court of Appeals by denying confirmation to all of President Obama's nominees -- to prevent Obama from giving the court a more liberal balance.

These filibuster threats were disconnected from all juridical merits. They were instead the tactical core of a subversive plan to preserve the conservative status quo on a court that will settle a tremendous amount of administrative law between now and the end of Obama's presidency. Put another way, Republicans were threatening to use the Senate's filibuster rules to improve the statistical odds that the court will upend Obama administration regulations -- to unilaterally change law from their minority position in the Senate.

Democrats were obviously unhappy about this, and began threatening -- once again -- to nuke the supermajority cloture rule, this time as it pertains to judicial nominees.

A week and a half later, Republicans have successfully filibustered two D.C. Circuit Court nominees, and are promising a hat trick. They seem inclined to call the Democrats' bluff, and are using political psy-ops as a kind of deterrent against the threat that Dems will go nuclear.

But the nullification strategy is radical, and entirely new. It transgresses the semi-stable norms -- regarding professional qualification and ideological temperament -- that had previously governed which nominees were subject to rejection by the minority. And so the persuasive power of GOP threats are self-limiting.

“Be careful what you wish for,” Sen. Chuck Grassley, R-Iowa, the senior Republican on the Senate Judiciary Committee, said on the Senate floor Tuesday. “[I]f the Democrats are bent on changing the rules, then I say go ahead. There are a lot more Scalias and Thomases out there that we'd love to put on the bench. The nominees we would nominate and confirm with 51 votes will interpret the Constitution as it was written. They are not the type who would invent constitutional law right out of thin air.”

This is a bizarre warning. If Democrats change the rules, then future Republican presidents will flood the judiciary with … precisely the kind of conservative jurists they've been nominating and getting confirmed for years and years.

When Clarence Thomas was confirmed, Democrats held the majority in the Senate. It's not just that there was no filibuster. Democrats controlled the chamber and allowed the minority to confirm him with an up or down vote. Most Dems voted no, but he was confirmed 52-48. On Tuesday, Cornelia Pillard got 56 votes in the Senate, more than Thomas but four short of the 60 required to overcome a filibuster.

Republicans controlled the Senate when Ronald Reagan nominated Antonin Scalia, but not only did Democrats decline to filibuster him, he was confirmed unanimously.

Things had become significantly more polarized and contentious by the time George W. Bush became president, but his two Supreme Court nominees (not counting Harriet Miers, an outlier whom Republicans sank on their own) were both confirmed pretty easily. John Roberts on a 78-22 vote, facing no filibuster; Sam Alito by a vote of 58-42 after a bunch of Democrats helped the GOP break a symbolic filibuster. At no point in George W. Bush's presidency did Democrats try to moot court vacancies by refusing to confirm a category of nominees, or accuse Bush of court packing simply by trying to fill those vacancies.

But that's where we are today.

It's true that the elimination of the judicial filibuster would allow a future Republican president to fill vacancies more expeditiously. But it would give Obama the same power.

For Grassley's threat to have any teeth, he'd need to warn Democrats that Republicans will confirm hyper-radicals whom they've been too timid to nominate in the past, or would unilaterally add seats to appellate courts and pack them with right-wing judges. But that would be crazy.

Alternatively, Republicans could just agree to confirm some of Obama's judges. I think Democrats would probably drop the nuclear threat if Republicans cleared two of Obama's three D.C. circuit nominees. Maybe Republicans could secure the confirmation of a third, more conservative judge, or get the remaining seat on the court eliminated legislatively.

But their current position -- daring Dems to go all the way nuclear or cave completely -- gives Dems almost no choice but to pull the trigger. If Republicans had meritorious objections to any of these nominees, the nuclear threat would be a disproportional escalation. Obama could find other judges. What they're doing instead is a judicial replay of their unacceptable bid to unilaterally gut Wall Street's consumer watchdog office and void the National Labor Relations Board. Democrats didn't stand for that, and won. Republicans caved and confirmed several waylaid executive branch nominees over the course of just a few days. They should run the same play again. And if Republicans don't fold, they should go nuclear.

Sen. Pat Leahy, D-Vt., chairman of the Judiciary Committee, is on the same page.

“I think we’re at the point where there will have to be a rules change.”