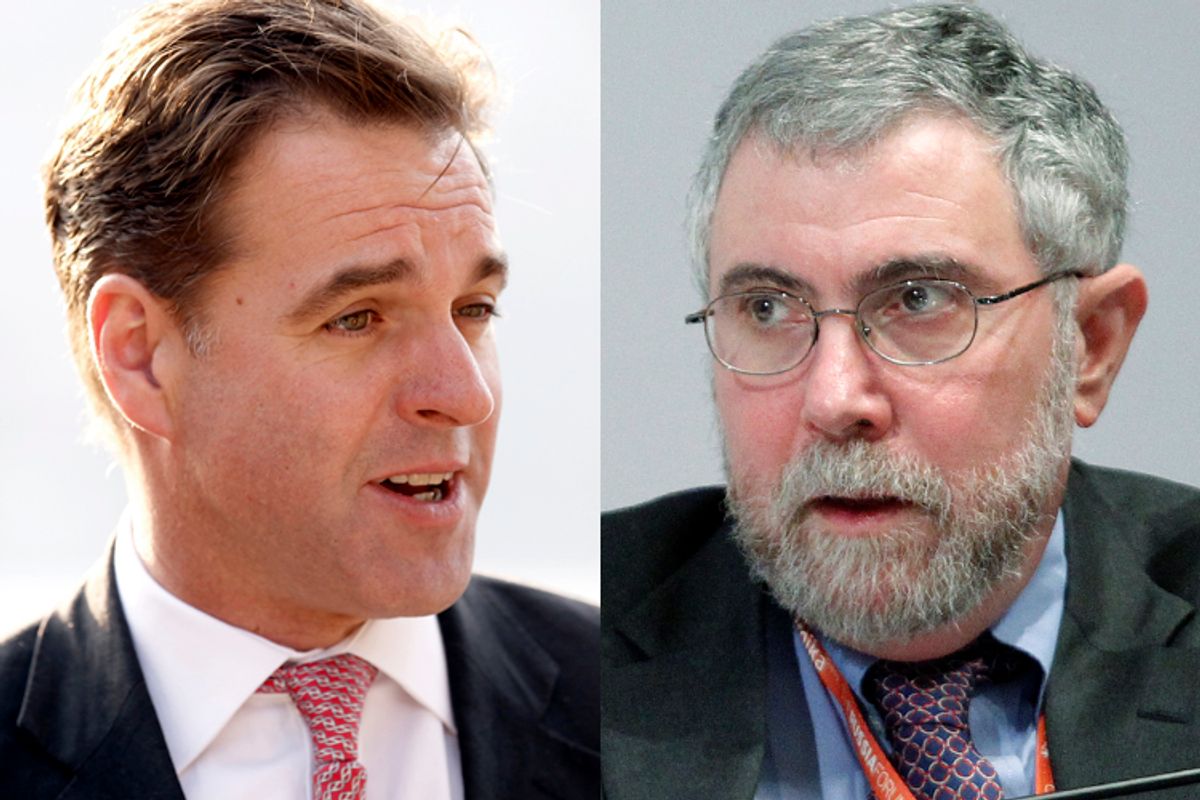 Economic historian Niall Ferguson of Newsweek cover infamy (which for some reason is still available for reading on the Internet) has an all-consuming crusade: making hay about the tyranny of economist Paul Krugman. Because as we all know, out of all the ills impacting our government and society, Krugman’s espousal of his pro-Keynesian economic ideas is most deserving of attention.

By all measures Niall Ferguson is a much accomplished man. He’s a Laurence A. Tisch Professor of History of Harvard. He’s a senior research fellow of Jesus College and of Oxford University and a senior fellow of Stanford University’s Hoover Institution and he’s published five books. Ferguson, who was named to Time magazine’s 100 Most Influential List at the age of 40, has been courted for his insight and opinion by both the Romney and McCain campaigns, multibillion-dollar hedge funds and numerous outlets, some of which include Businessweek and the Financial Times. His page on the Washington Speakers Bureau claims he’s been called “the most talented British historian of his generation.”

Carrying petulant and insufferable obsessions is not typical of people of such prestige, which in turn raises the question: Why is the esteemed historian so utterly consumed with the Nobel Prize-winner and New York Times columnist?

Last month, Ferguson published a three-part, 7,300-word essay on the Huffington Post and his own blog titled “Krugtron the Invincible” — the name Krugtron is a cheeky reference to '80s cartoon character Voltron, which Krugman himself came up with. In what he most likely thinks is a tour de force, Ferguson lauds himself as the chosen one to issue a stern lesson in humility to the tyrannous Krugman and to execute the much-needed task of getting Krugman to apologize for not making accurate predictions about the financial and eurozone crises. Before I delve into his unjustifiably sanctimonious vanity project, I’d like to point out that Ferguson refers to himself not as an economist but as an economic historian. So what we have here isn’t one economist criticizing one of his peers for his work in their shared field but, instead, we are seeing a historian throwing an eloquent tantrum about one economist’s claims of what will happen in the future.

Ferguson’s reasoning for why all this digital ink needed to be spilled:

You may ask: Why have I taken the trouble to do this? I have three motives. The first is to illuminate the way the world really works, as opposed to the way Krugman and his beloved New Keynesian macroeconomic models say it works. The second is to assert the importance of humility and civility in public as well as academic discourse. And the third, frankly, is to teach him the meaning of the old Scottish regimental motto: nemo me impune lacessit (‘No one attacks me with impunity’).

For a good portion of the Krugtron series, Ferguson occupies himself with rehashing old Krugman columns and blog posts that everyone else in the world has long since forgotten. In Krugtron Part I Ferguson points to a number of posts/columns by Krugman between April 2010 and July 2012 proclaiming the forthcoming downfall of the euro. Ferguson pounces on the fact that the euro hasn’t collapsed as evidence of Krugman’s fallibility. True, the euro hasn’t fulfilled Krugman’s prophecies to the fullest extent, but based on Ferguson’s victory dance you’d think the crisis was averted and that the euro was thriving, which runs contrary to this report about the euro crisis still persisting.

Ferguson undercuts his own case when he later proudly dons the fact he was wrong in a prediction about the euro. (Also, why is a historian making economic predictions?)

Now, I happen to be rather a euro-skeptic myself. I opposed the creation of the euro and predicted at the outset that the experiment of monetary union without fiscal integration would ultimately degenerate. But today, as you may have noticed, the euro is still intact.

You may wonder why someone would call out another person for being wrong about a prediction and then immediately mention one of his own wrong predictions. Ferguson’s admission of error is no error but rather a misguided attempt to frame himself as the grown-up who’s more than willing to admit when he’s wrong. This is all part of Ferguson’s lesson and Ted Talk-like take on humility.

In the last paragraph Ferguson declares: “I would like to see [Krugman] admit that he got the biggest call of the last several years dead wrong, again and again and again. Not only should he admit his mistake, but he should also apologize to the millions of people who have suffered as a result of it.”

What Ferguson is doing here is exaggerating Krugman’s power to justify the twisted David vs. Goliath scenario that keeps running in his mind. We all know that Krugman isn’t responsible for causing widespread suffering. What we most certainly know is that Wall Street heaped hardship and misery onto millions of Americans due to its reckless behavior that caused the 2007-08 financial crisis. But where’s Ferguson's epic takedown of the gargantuan securities frauds that erased trillions in wealth? Ferguson is concerned with more important matters such as Krugman’s failure to predict the financial crisis. And for the record, Ferguson believes that globalization was the cause of the financial crisis.

Just as he did in Part I of Krugtron, Ferguson again dons his investigative reporter fedora and digs up old Krugman posts in another endeavor to show that Krugman is wrong about his proclamations on the financial crisis. In this section, Ferguson completely glosses over the fact that very few economists in the mid-2000s predicted the 2008 crash and operates under the notion that the only economist blind to the bursting of the housing bubble was Krugman. This was a time when people were mocked for expressing their views that the economy would tank due to the housing bubble. What matters more to Ferguson is publicly haranguing someone over his failed prediction and demanding a pointless apology in return, rather than taking to task the actual culprits of a major financial meltdown.

Krugtron Part III is where Ferguson demonstrates the triumph of the noble historian over the ruthless economist.

The economist seeks to simplify the world into mathematical models ... But to the historian, who is trained to study the world ‘as it actually is’, the economist's model, with its smooth curves on two axes, looks like an oversimplification. The historian's world is a complex system, full of non-linear relationships, feedback loops and tipping points. There is more chaos than simple causation. There is more uncertainty than calculable risk. For that reason, there is simply no way that anyone -- even Paul Krugman -- can consistently make accurate predictions about the future.

I’m guessing Ferguson came to the conclusion that no one can make predictions after his prediction about the bond market spectacularly failed.

But the clear quote winner in Ferguson’s opus is this line: “So we public intellectuals should not brag too loudly when we get things right.” Oh, so if Ferguson had written Krugtron in four parts instead of three, that would have been considered bragging too loudly?

In the end Ferguson just wants the Krugtron to issue a public and profuse apology for constantly showing up neoliberals like himself for being consistently wrong on the subject of austerity. This demand could have some legs if Ferguson had apologized for his astonishing disregard for facts in that Newsweek cover story that made him more famous than any of his life achievements. In the Atlantic’s extensive fact-check of the catastrophe, Matthew O’Brien points to 12 areas that he describes as “factually challenged.” Did Ferguson do the right thing by apologizing for subjecting Newsweek readers to a gross misrepresentation of President Obama’s record? No, he doubled down and lashed out on camera against his critics, who included many reputable outlets and publications. To be fair to Ferguson he did say sorry for that time he made a vicious homophobic attack on John Maynard Keynes, however he has never apologized for this attack on Keynes’ sexuality in his book "The Pity of War," as pointed out by this Dish reader.

Less than a week after his bestowing upon the world the Krugtron trifecta, Ferguson made the rounds on-screen to promote his “Paul Krugman Apology” tour. In a 17-minute video chat on HuffPost Live, when asked about the shutdown drama happening in Washington, he warns, “We’re playing Russian Roulette next to a fuel dump.” But on Oct. 6 he wrote a post on his website titled “The Shutdown Is a Sideshow. Debt Is the Threat.” Ferguson is obviously too focused on the real prize of tearing Krugman a new one to bother with keeping track of his own positions. Ferguson actually goes more than a minute without mentioning he-who-shall-not-be-named, but instead spends that time propagating the most tired of false equivalencies that the gridlock that caused the shutdown is due to both parties and that President Obama has made nary an effort to compromise with the reasonable Boehner- and Tea Party-led crisis.

The entire exchange is an awkward and clumsy dance between one person trying to hide her being creeped out and another person squirming around trying to contain but at the same time trying to promote his rage for a mythologized figure. At one point Ferguson actually makes a direct plea to the camera for Krugman to put an end to his cruelty. It makes one imagine Krugman exclaiming, “Well, he looked straight at the camera and asked politely, I guess this means he wins!” The only more concrete evidence of Ferguson’s delusion would be if he possessed an actual Paul Krugman voodoo doll. But the worst part is when Ferguson mentions how Krugman called him a racist, and instead of maturely countering Krugman’s salvo, Ferguson without a hint of shame plays the “I’m not racist, ask my black wife" card.

If Niall Ferguson is really the standard-bearer of intellectual honesty and virtue that he makes himself out to be, then he should pen another three-part series titled Fergutron -- in which he calls out an often wrong historian on his incomprehensible fixation with an economist.