A documentary about the tiny-house trend reveals its joys (low utility bills!) and its pitfalls 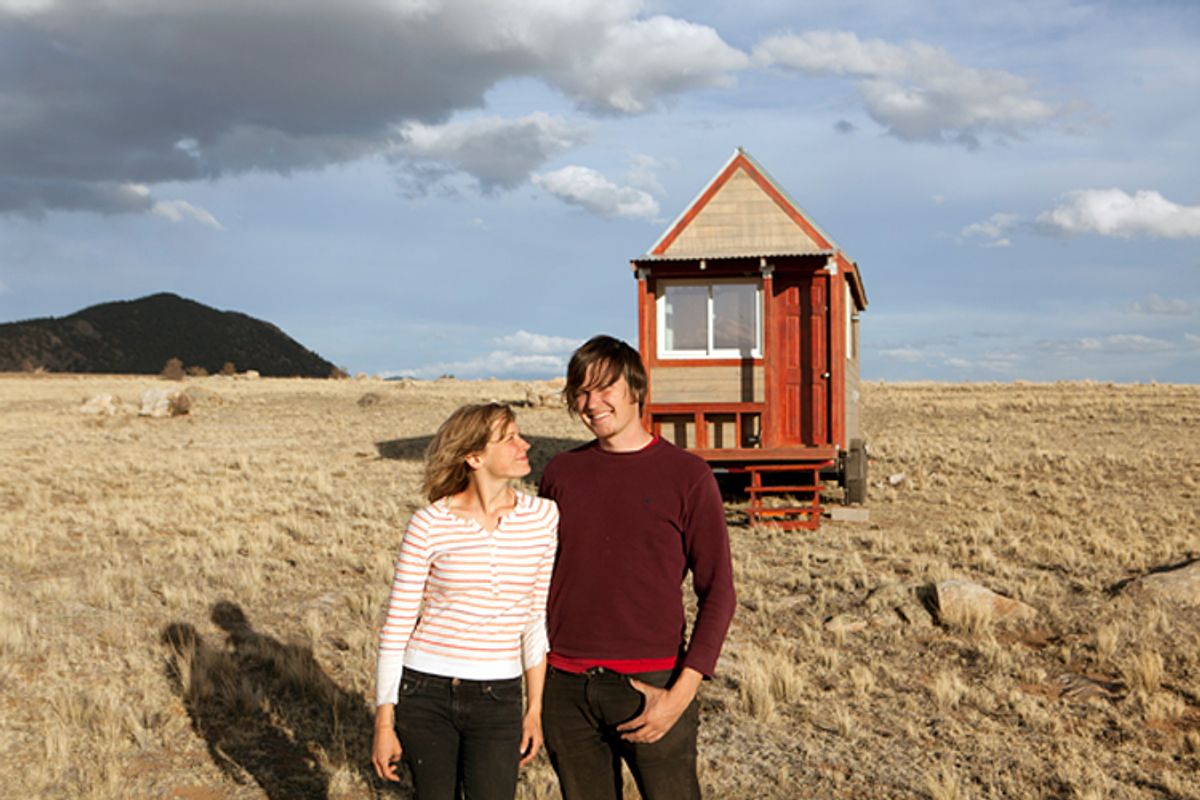 When 30-year-old self-proclaimed drifter Christopher Smith decided to build a parking spot-size wood frame house on the back of a trailer and relocate to an empty plot of land in rural Colorado, he became part of what has come to be called the small or tiny house movement. He also became a filmmaker -- along with his girlfriend and co-director Merete Mueller. Their documentary "Tiny" airs this Sunday on Al Jazeera America.

As a New Yorker, when I read about Smith's decision to downsize his material existence, my first impulse was to crack wise. I know people in three different boroughs who make do with an embarrassing paucity of square footage. But he and his fellow tiny housers are taking space-saving to an entirely different level. As the documentary opens, Smith marks up his notepad with plans to hand-build a 124-square-foot structure. Later on, a woman shows off her 98-square-foot home. Tammy Strobel and Logan Smith live together in a tiny house, a happy couple inhabiting a mere 128 feet of real estate in Portland, Ore.

"From 1970 to 2000," says Christopher Smith, narrating his own journey, "the average size of a new house in America has almost doubled, even while the average family size has gotten smaller." While the tiny house movement could be viewed as a reaction to this particularly American pattern of excess, Smith and Mueller's documentary is quick to point out that many of the couples and individuals who get involved do so for financial rather than political or dogmatic reasons. Derek "Deek" Diedricksen, wonderfully chyron'd here as a "tiny house blogger and micro architect," says, "Smaller houses -- you've probably heard it a million times -- [cost] less to heat, less to furnish, less to maintain, less to pay for -- no mortgages in certain cases. So, all around, you're kind of beating the system."

While cheap, the diminutive domiciles also have their drawbacks. The most obvious of these is lack of space, but the most surprising might be legality. As Christopher Smith points out while showing off the beautiful views from his blank plot of land, it is actually illegal for him to build a home smaller than 600 square feet within his particular county in Colorado -- hence his plans to rig the house on a flatbed trailer. This life-hack allows him to avoid building codes altogether. Way to beat the system, indeed.

Portland is, unfortunately, the most metropolitan setting visited during the hour-long special. I've heard tell of different people living in all sorts of small, ingeniously designed homes in cities where space is at a much higher premium than in the relatively rural settings depicted here. It might have been interesting to examine some of those situations as well.

Whether you want to lessen your footprint or just save money, country living is not for everyone. My favorite moment in "Tiny" comes about halfway through when Mueller, heretofore Smith's devoted partner in building out his quiet little corner of the world, confesses that her own ideal living situation actually involves moving to New York City: "The same way that you know that you want to be surrounded by the mountains -- or the way that the landscape here makes you feel, I want to walk out of my house and be on a city street."