GOP's ignorance of economics: Even more dangerous than realized

Conservatives' inflation-mania and deficit-hawking are doing long-term damage to the economy, a new report explains 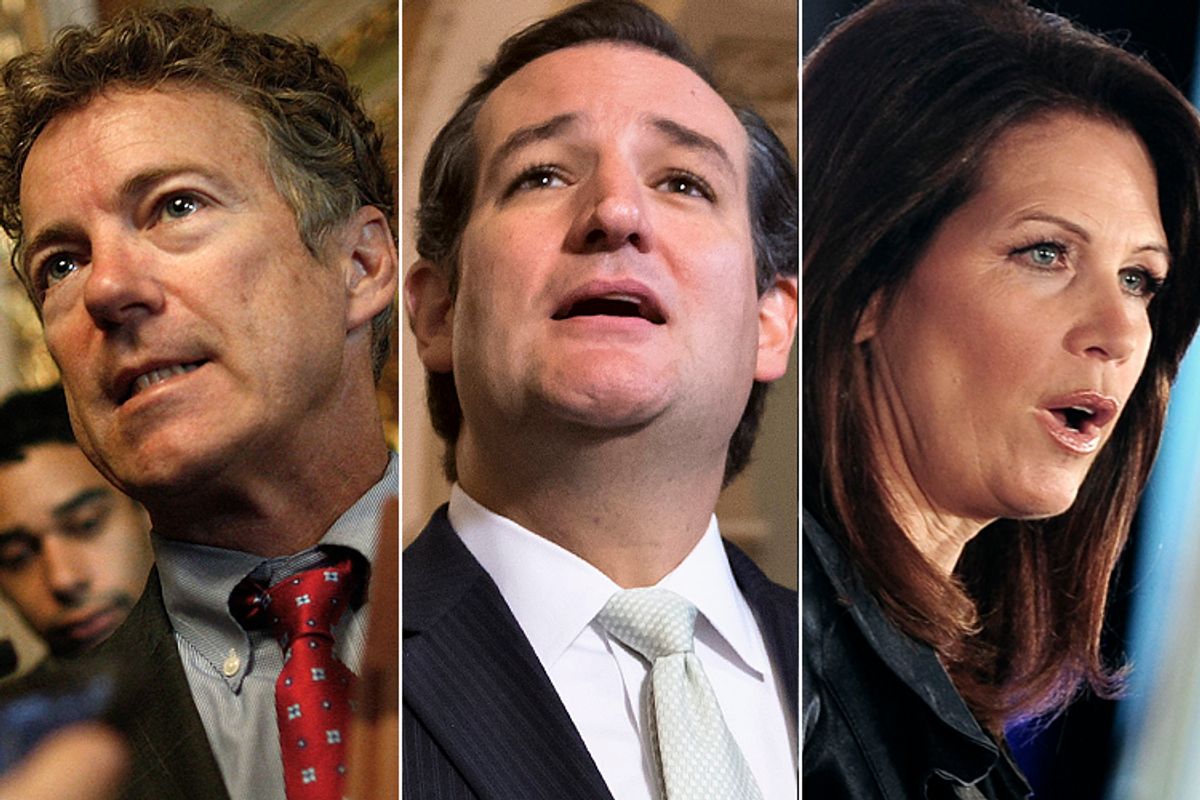 Imagine a world where Republican politicians understood economics. In 2008, Obama is elected to the Presidency and proposes a $2 trillion dollar stimulus program. This creates a deficit, but it’s not a problem because Bush hadn’t cut taxes, so the government has been running surpluses for 8 years. States happily take the money to invest in education, infrastructure and services. Hundreds of billions of dollars fund green jobs and worker-retraining programs keep down the numbers of long-term unemployed. The minimum wage is $10 and pegged to inflation, the EITC is expanded. The economy turns around slowly, but an active Fed keeps interest rates low, focusing with laser precision on unemployment.

None of this happened. Instead, the U.S., after a short bout of stimulus turned to a sequestration, one that has certainly hobbled the economy, and may actually increase deficits by slowing economic growth (this happened in Britain). The Fed has been barraged by inflation hawks, but has managed to keep strong in the wake of foolish economic advice. Republicans have fought the stimulus and Governors like Chris Christie nixed crucial infrastructure projects. The minimum wage is stuck at $7.25 an hour and fast food workers languish in poverty.

It may seem like these two worlds won’t matter much in five years. Certainly deficits will be higher in the second, GDP lower, workers less safe, but eventually, the economy will bounce back. A new paper by Dave Reifschneider, William L. Wascher and David Wilcox argues the opposite: the prolonged downturn following the “Great Recession” has likely caused long-term economic damage. The paper is primarily about the implications for monetary policy, since it’s written by three members of the Federal Reserve Board, but the most important point is that the recession has done permanent damage to the economy.

In economic jargon, what the economists describe is “hysteresis,” which first came from a 1986 paper by Oliver Blanchard and Lawrence Summers entitled, “Hysteresis and the European Unemployment Problem,” in which the authors argue that large demand contractions can have long-term effects on unemployment and economic growth. Policymakers should intervene to prop up demand to limit long-term damage to the supply side of the economy. As Gavyn Davis notes in the Financial Times, the implication is that, “In a reversal of Say’s Law, and also a reversal of most US macro-economic thinking since Friedman, demand creates its own supply.”

So what are the implications of the Great Recession and our poor response to it? The authors write that, “potential GDP is currently about 7 percent below the trajectory it appeared to be on prior to 2007.” Even if we were to be hitting our full potential (we aren’t) GDP would still be 7 percent lower than had their not been a recession. CBO estimates that potential GDP for 2014 is $15 trillion. So if the authors are correct, that means our potential GDP is about $1 trillion lower than it would be without the Great Recession. That’s a lot of money. 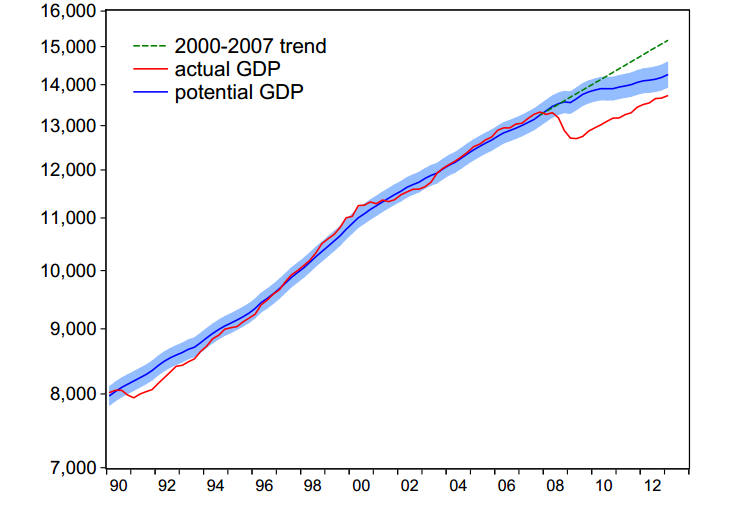 Earlier this year, Summers and Bradford Delong argued in a bombshell paper that since a bad economy means low interest rates, slack employment, and the possibility of hysteresis a stimulus bill could actually be self-financing. They are careful to curb their argument (something their opponents rarely do), arguing that this only occurs in a deep recession. But this recession should certainly count. Had we intervened quickly, we could have new bridges, trained workers and a green economy. Instead, we have a deteriorating infrastructure, a dejected and poorly trained workforce and an aging capital stock. That is hysteresis.

Reigschneider, et al, confirm that inflation-mania and deficit-hawking are doing long-term damage to the economy. Yet the Economist argues that if anything, inflation is too low. As Paul Krugman notes:

I can, in a way, understand refusing to believe in global warming — that’s a noisy process, with lots of local variation, and the overall measures are devised by pointy-headed intellectuals who probably vote Democratic. I can even more easily understand refusing to believe in evolution. But the failure of predicted inflation to materialize is happening in real time, right in front of our eyes; people who kept believing in inflation just around the corner lost a lot of money. Yet the denial remains total.

The Republican ignorance of economics appears to be far more dangerous than previously believed.