A designer exploits Oprah's image for profit, literally allowing women to "wear" her 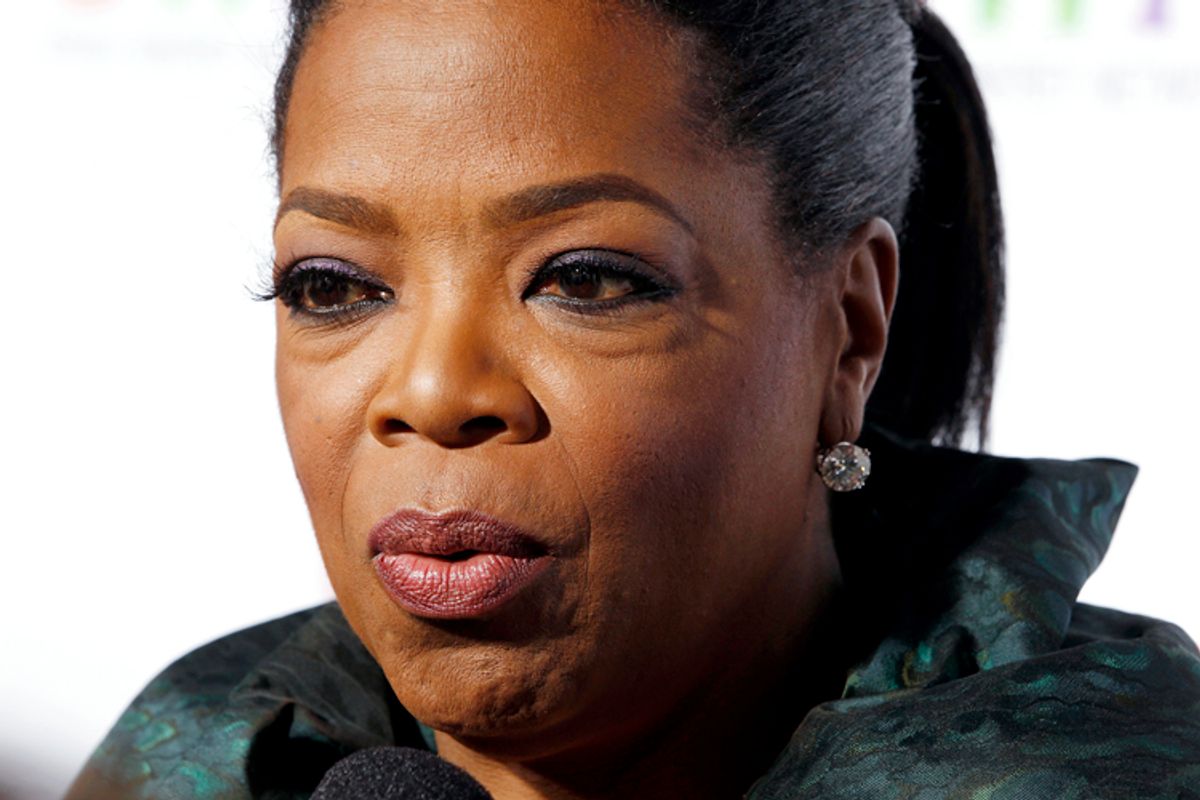 “Dear white women please stop using my body to get people to accept your body.”

Writer and activist Sydette Harry (@Blackamazon) tweeted this plea in reference to the furor over Lily Allen’s video, “Hard Out Here.” Harry’s statement applies with equal force to Peggy Noland. Noland, a designer from Kansas City, Mo., who has previously collaborated with Rihanna and Miley Cyrus, was recently interviewed by the Cut about her latest project – a line of T-shirts and dresses featuring Oprah Winfrey’s head superimposed onto nude black female bodies in various sizes: “skinny,” “average” and “obese.”

Describing her collaboration with Sally Thurer, who created the images of Oprah, Noland explained their inspiration:

For me, it originated as kind of the age old [red] carpet question: Who are you wearing? And this clearly is: You’re wearing Oprah instead of a designer. Sally mentioned from the onset of this collaboration that one of Oprah’s most effective qualities is that she’s a placeholder, she’s a stand-in for you with her foibles and her failures — especially with her public weight issues.

Noland doesn't realize it, but that’s a fairly galling statement. In Noland and Thurber’s rendering, Oprah is no longer a person with her own (carefully crafted) public image. She’s no longer a person whose humanity we have to recognize, let alone respect. In Noland’s rendering, Oprah is merely a “placeholder” – a blank canvas that other women can project their issues onto. These dresses and shirts literally use black women’s bodies – each one styled as Oprah’s “body” – as masks or shields for the wearer’s own body. Noland invites women (and men) to camouflage their own weight/body image issues by donning an “Oprah” suit. Presumably, wearing these imagined renderings of Oprah’s nude body allows a woman to draw attention away from her own body and its flaws. People can project all of their insecurities onto naked Oprah, and thus feel better about themselves. It’s all eerily reminiscent of the character Buffalo Bill in "The Silence of the Lambs," who was driven to fashion himself a “girl suit” out of women’s skin. It boggles the mind that anyone could possibly think using someone else’s image in this manner is not only acceptable, but “art.”

Noland also describes the dresses as an updated version of David Nelson’s infamous painting of former Chicago Mayor Harold Washington in women’s lingerie. In 1988, Nelson, a white man who was a student at the School at the Art Institute of Chicago, created a painting called “Mirth & Girth,” which featured the then-recently deceased African-American mayor of Chicago, Harold Washington, as an obese man wearing women’s lingerie and holding a pencil. Washington died slumped over his desk, holding a pencil in his hand. The painting briefly hung in the Art Institute as part of a private student exhibition. City councilmen, finding the painting defamatory, offensive and disrespectful, seized it, setting off racial tensions within the city and triggering a lawsuit from the artist that his free speech rights had been infringed upon.

Noland’s reference to this hurtful episode in Chicago’s history reveals more clueless bigotry. Nelson’s painting was a valid form of artistic expression, but it was also painfully insensitive to a community still grieving the loss of a beloved mayor. What made Noland think the Nelson incident needed “updating” – and how is fake-naked Oprah an “update” of Harold Washington in fake drag? Even assuming Noland wanted to revisit Nelson’s former expressionistic territory, why not choose a more obvious target – such as Chicago’s current mayor, Rahm Emanuel?

Noland has displayed little concern for Oprah's views on her dresses. When asked whether Oprah was likely to put the dress on her “Favorite Things” list, Noland responded,

Surely Oprah personally would not be excited about having our version of her nude body splashed on a dress for other people to wear, but I think it’s an interesting conversation to have about our access and our interest in people that we don’t know.

Noland is the latest in a recent spate of white women accused of using black women’s images for profit and personal gain. But her Oprah dresses aren’t offensive simply because they use Oprah’s image. If Noland had chosen to use images of other black women – whether famous or non-famous – instead of Oprah, the effect would still be disturbing. Even if Noland had chosen not to use black female imagery at all – even if she had Photoshopped the face of a white female celebrity who also has been public about her weight struggles – Adele, or Melissa McCarthy, for example – onto white female bodies, the images would be troubling. But it would be wrong to dismiss Noland’s use of Oprah, as opposed to a white female celebrity, as simply the racist sprinkles on a misogynistic cake. The race and gender issues inherent in plastering a bunch of tacky dresses and T-shirts with Oprah’s fake nudes – allowing women to literally enshroud themselves in Oprah’s “body” – are inseparable.

Still, the solution is not for people like Noland to substitute exploitative images of white female bodies for black ones. The solution is for people to understand that these images are painful – and that inflicting pain solely to stoke controversy and sell a couple of ugly dresses for profit is downright evil.