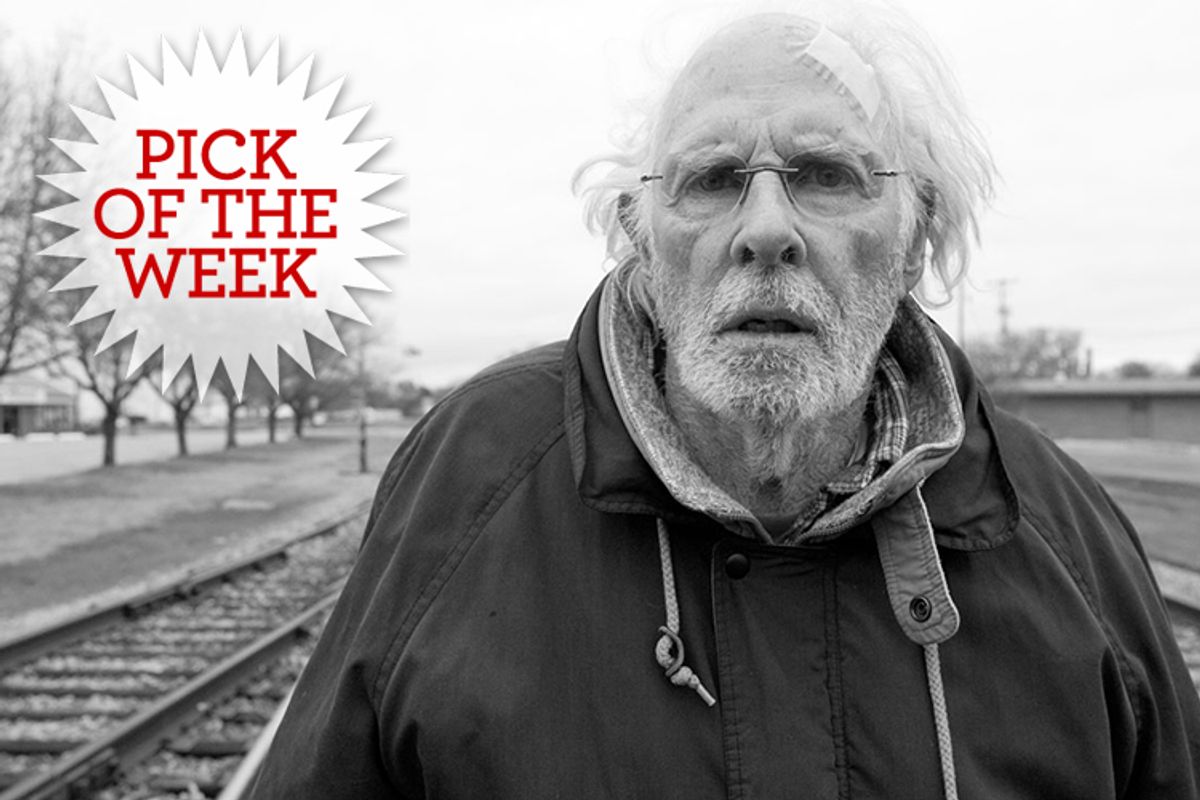 “Nebraska” doesn’t quite know what kind of movie it wants to be, which I suppose is another way of saying it’s an Alexander Payne film. Shot in black-and-white, on some of the most depressing American locations you'll ever see, "Nebraska" is a ruthless social satire that proves Payne hasn't lost his misanthropic edge after going gentle with “The Descendants.” At the same time, it’s also a sentimental two-hander with Hollywood veteran Bruce Dern and one-time “Saturday Night Live” star Will Forte as an estranged father and son, finding a way to connect during an unexpected road trip. It’s a career-capping performance by Dern, who is so convincing as an addled, drunken, embittered and probably dying man that he doesn’t appear to be acting, but Forte is just as good playing a preoccupied, emotionally constricted man-child. (Dern, who is now 77, won the best-actor prize at Cannes this year, and is likely to be nominated for an Oscar as well.)

These two aspects of the movie are sometimes in harmony and sometimes in conflict, and after two viewings I feel like there’s a dissonance at the heart of “Nebraska” that Payne doesn’t quite control. Maybe he’s not trying to; the dissonance comes from America. One of the purposes of the red-state odyssey undertaken by Woody Grant (Dern) and his son David (Forte) – they drive from Billings, Mont., to Lincoln, Neb., 800-odd miles of North American empty – is to demonstrate that the much-mythologized agricultural communities of the heartland are moral and economic vacuums, zones of stupidity, obesity and small-minded greed. Karl Marx’s famous remark about “the idiocy of rural life” (by which he actually meant its cultural isolation and political apathy) has nothing on Payne and screenwriter Bob Nelson’s portrayal of the fictional Hawthorne, Neb., the Grant family’s original hometown.

I don’t claim that Payne had any political intentions in making this movie, but it’s hard not to perceive “Nebraska” as a portrait of a version of American life that’s rapidly dying out. To a significant extent, the aging, white small-town demographic of this movie correlates with Tea Party sympathy, "values voters" and profoundly self-destructive anti-government sentiment (although none of those things is ever mentioned). Almost everyone we meet in Hawthorne is old, not counting Bart (Tim Driscoll) and Cole (Devin Ratray), David’s bovine and criminal identical-twin cousins; the only businesses that seem to be thriving are the two downscale taverns and a garage run by Mexican immigrants. We’re treated to a number of conversations about how long it takes, or might hypothetically take, to drive from Point A to Point B (a topic of endless fascination to the American male) and about who used to drive what car and when. There’s a wonderful back-and-forth about a ’78 Impala – unless it was a ’79 Buick – that ran forever until it stopped running, that betrays Nelson’s past as a sketch-comedy writer. (Nelson is from Yankton, S.D., and Payne’s parents ran a restaurant in Omaha, so you can’t accuse either of them of being snarky coastal invaders.)

David doesn’t especially want to drive his dad all the way to Lincoln, or at least he doesn’t at first. But one of the sneaky things about “Nebraska” is that from the outset David grasps the narrative possibilities. Woody’s received a letter telling him that he’s won a million dollars – yes, one of those letters, and I didn’t know they still existed either – and literally won’t let go of it. In the opening scene he gets corralled by a sheriff’s deputy on the shoulder of the interstate, as he doggedly trudges out of Billings, and later David has to drag him home from the bus station. (Woody isn’t entrusting his million bucks to the U.S. Postal Service, and can you blame him?) David’s job selling home-theater hardware isn’t going that great, and his girlfriend has moved out. Driving to Nebraska offers both a window into his own family’s past and one last chance to forge a connection with Woody, who seems mentally checked out about half the time and is clearly in failing health. About two-thirds of the way through the movie, David gets to sit at a kitchen table with Woody and tell him how glad he is they’ve gotten to spend this time together.

Woody isn't having it. While watching Dern’s performance a second time through, I couldn’t help recalling William Butler Yeats’ famous lines about an old man’s heart: “sick with desire/ And fastened to a dying animal/ It knows not what it is.” There’s nothing like seeing a familiar figure do something entirely new, and at no point in Dern’s long career of playing crime-movie bad guys and (as he puts it) “fifth cowboy on the left” has there been anything remotely like this. There’s a blankness to Woody, as well as a hunger and a ferocity, that feels terrifyingly real. We can’t tell what he’s really thinking when David tells him, over and over again, that the million-dollar letter is a come-on for magazine subscriptions and that he hasn’t won anything. Sometimes Woody gives back an implacable hostility and sometimes he’s like a petulant child: “But it says I won!” When he claims not to remember an old girlfriend from Hawthorne, or never to have considered the question of whether he was in love with Kate (the marvelous June Squibb), David’s irascible and foulmouthed mother, we can’t be sure whether he’s lying to David or to himself.

As David and Kate both observe, it’s not like there’s anything Woody could really do with a million dollars at this point. He says he wants a new pickup truck (even though his driver’s license has been revoked) and an air compressor to replace the one an old business partner back in Hawthorne absconded with, 30-odd years ago. When David and Woody stop off in Hawthorne for an impromptu family reunion on their way to Lincoln – they drive by way of Rapid City and Mount Rushmore, and those of you with Google Maps open can start tut-tutting right now – you can bet former partner Ed Pegram surfaces again, once word starts to spread through town that ol’ Woody has come into serious money. That would be Stacy Keach, nearly stealing the show in one of his best villain roles, leading the pack of locals who refuse to believe David’s explanation that the whole thing is just an old man’s bewilderment and there isn’t actually any money. As one of the bovine, mutton-chop-sporting twins scornfully puts it, “We’re way beyond that!”

Woody may be a confused old drunk with a tendency to lose his teeth in odd locations, who was a crappy father to David and Billings newscaster Ross (Bob Odenkirk), but his quest for nonexistent riches seems positively noble next to the zombielike grasping of the Hawthorne townspeople. In the middle of a movie that’s bound for a heartwarming conclusion (of sorts), Payne’s portrayal of Woody’s old friends and extended family is almost unrelentingly cruel. I guess you have to put it in context, that being the fact that these people live in the absolute middle of nowhere and have suffered through a long-term economic shift that has caused many Grain Belt small towns like Hawthorne to dry up and blow away. (One of my great-grandfathers was born in a town in Iowa that has fewer people today than it had in 1900.) Even the smell of entirely imaginary money is enough to render them all simultaneously pathetic and evil, a bunch of buffoons who traded in their souls long ago for a platter of bleu-cheese buffalo wings.

As always, Payne is expert at pulling comedy out of unlikely situations: A visit to the town cemetery, in which Kate flashes the grave of a former boyfriend (“See what you could’ve had if you hadn’t talked so damn much about wheat?”), or David and Ross’ renegade effort to resteal the missing air compressor. Even though Payne didn’t write this movie, it rolls together many of the themes of his previous work: “About Schmidt,” “Sideways” and “The Descendants” all involve road trips, family secrets and moments of male reckoning, and the tone of withering satire here harkens back to “Citizen Ruth” and “Election.” “Nebraska” is also overtly manipulative, which has also become Payne’s trademark: He wants us to laugh at this demented old guy with his sweepstakes letter, his sad-sack son and their depraved surroundings, and then he wants to turn it all around at almost the last minute and redeem them. It works, or more accurately it comes damn close, largely thanks to the remarkable performances Payne gets from Dern and Forte. But when you actually do hit the lottery, don’t tell anyone back home.