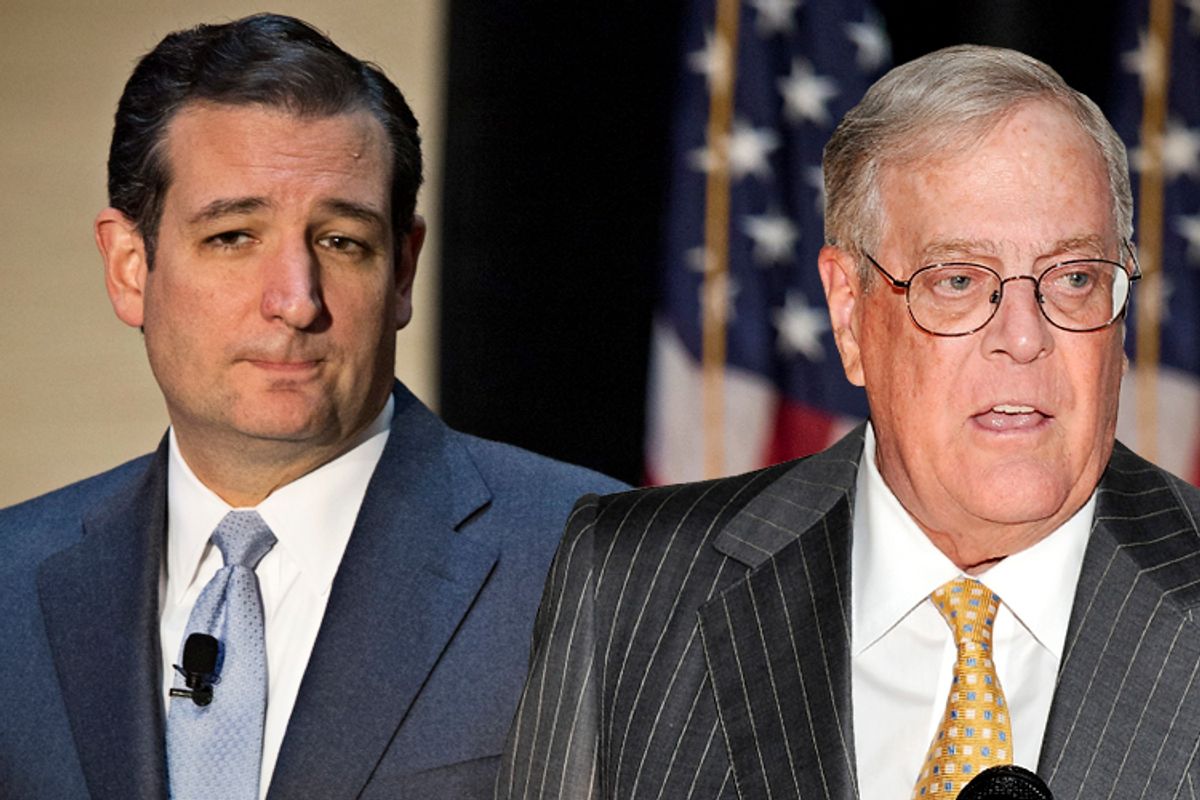 A national conservative network (whose backers include the Koch brothers, event sponsors include Facebook, and alumni include Ted Cruz) misrepresented its agenda and activities, and reaped the benefits of mainstream respectability and nonprofit status -- while coordinating across states to push a hard-right agenda and enrich its corporate backers -- a new report alleges.

Specifically, the report by the Center for Media and Democracy focuses on the State Policy Network, a little-known network. “What we uncovered through our investigation is that SPN along with its affiliates amount to $83 million just flooding into the states to push and promote this agenda …,” CMD director Lisa Graves told reporters on a Wednesday call. “And that money is on the rise.” The paper was released Wednesday along with a set of state-level reports on SPN affiliates, authored by affiliates of the progressive network ProgressNow.

The CMD report accuses SPN affiliates of mounting “coordinated efforts to push their agenda, often using the same cookie-cutter research and reports, all while claiming to be independent and creating state-focused solutions …” It charges that, “Although SPN think tanks are registered as educational nonprofits, several appear to orchestrate extensive lobbying and political operations to peddle their legislative agenda to state legislators, despite the IRS’ regulations on nonprofit political and lobbying activities.”

Asked about the CMD report, SPN emailed a statement from its president, Tracie Sharp, saying, “Because we are legally and practically organized as a service organization (not as a franchise), each of the 64 state-based think tanks is fiercely independent, choosing to manage their staff, pick their own research topics and educate the public on those issues they deem most appropriate for their state.” But Sharp said each of those 64 “rallies around a common belief: the power of free markets and free people to create a healthy, prosperous society.”

Sharp said that SPN respected “the privacy of our donors,” but that they gave “voluntarily,” which she contrasted with “groups like Progress Now and the Center for Media and Democracy who receive hefty gifts from unions, who in turn force their members to donate to political causes with which they may not agree.” The Supreme Court ruled in 1988 that contracts between unions and companies can only require workers represented by unions to pay what is “necessary to ‘performing the duties of an exclusive representative of the employees in dealing with the employer on labor-management issues.’”

While SPN is no household name, CMD notes it has at least one celebrity alum: former SPN-affiliated think tank fellow and current filibustering Sen. Ted Cruz, the co-author of a 2010 paper for Texas Public Policy Foundation arguing the Affordable Care Act violated the 10thAmendment. That paper notes that the TPPF is working with partners to develop an “Interstate Compact for Health Care Reform,” which it says would provide that member states “may opt out of Obamacare entirely …” The San Antonio Current noted that a “Health Care Compact Act” echoing Cruz’s concept is among the model legislation pushed by the American Legislative Exchange Council, the conservative group whose members include major companies and scores of state legislators. CMD notes that the same year Cruz issued that report, the Koch-backed Donors Capital Fund provided his think tank a $65,300 grant “for the organization’s project, Turning the Tide Unifying the States to Oppose Federal Overreach.”

The CMD report also cites numerous SPN ties to the better-known ALEC, including a grant from Donors Capital Fund, which Mother Jones called the “dark money ATM of the conservative movement,” specifically to fund SPN member groups to participate in an ALEC gathering. SPN or its member groups sit on eight ALEC task forces; the largest number are in the Task & Fiscal Policy and Education groups. According to CMD, SPN’s annual meeting in September included representatives from Koch Industries, the Charles Koch Institute, the Charles Koch Foundation and several Koch-backed right-wing groups like Americans for Prosperity.

CMD suggests that SPN’s billionaire backers may not be motivated by ideology alone. “Be it the Koch brothers and environmental policy, the Waltons and minimum and living wage laws, or the Bradley Foundation and education privatization,” charges the report, “SPN funders end up being a ‘client’ to the think tanks, receiving a service – influencing state legislators and promoting a right-wing agenda – that benefits them.”