An MBA for stoners: Get ready for the next growth industry

At a Seattle conference, clean-cut entrepreneurs look to get rich and stay legal. The "party bus" waits outside 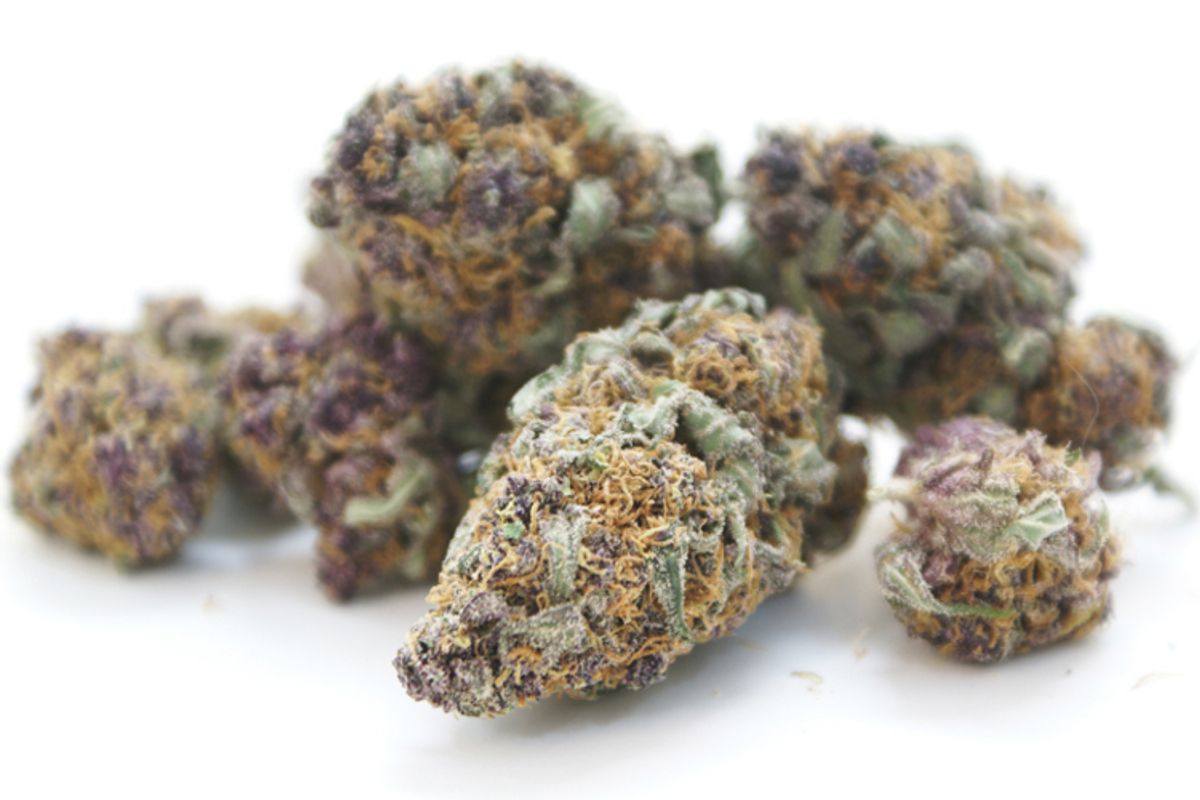 Molly Poiset has a lot to learn about pot. “I never was a smoker,” the 58-year-old pastry chef said. “I don’t even know how to use a bong.” But she’s taking steps to start a patisserie business specializing in marijuana-infused confections — essentially, gourmet medibles. She wants to give critically ill patients a decadent sweet that offers a bit of palliative care, something beyond the usual gummy worms and Rice Krispies treats crowding dispensary shelves.

Poiset became interested in weed two years ago when her 32-year-old daughter was diagnosed with leukemia and required a stem cell transplant, a grueling process that included nine weeks of quarantine. “I saw her suffer,” Poiset said. “It changes you.” While helping her daughter and grandchildren through the ordeal, she attended a caregivers group in Los Angeles. There, she learned about the many ways cancer patients can benefit from cannabis.

Poiset, who also plans to peddle pot-free treats, learned to bake at Le Cordon Bleu in Paris. This summer, after graduating, she moved to Seattle to establish residency in Washington State. In September, one of her pot truffles nabbed second place in the “best edible” category at Seattle’s High Times Cannabis Cup. This month, she’ll apply for a marijuana producer and processor license under the state’s new recreational pot law. To rein in costs and ensure she can get her hands on a strain that’s low in psychotropic THC but high in CDB, or cannabidiol, which offers a number of therapeutic effects, she plans to grow her own.

I met Poiset at the second annual National CannaBusiness Conference and Expo, held earlier this month at Emerald Downs, a thoroughbred racetrack half an hour south of Seattle. The bespectacled chef was one of 700 people from 31 states and 10 countries who attended the crash course in potpreneurship, put on by trade publication Medical Marijuana Business Daily and sponsored by leading pot lobbyists and companies. At the top of the conference agenda: teaching attendees to run a successful cannabis company without winding up in an orange jumpsuit.

Before becoming a pâtissier, Poiset ran her own interior design firm in Telluride, Colo., for 30 years. But starting a pot pastry business is a horse of a different color. To catch up, she’s spent the past six months doing reefer recon: talking to industry insiders, devouring cultivation websites and perfecting recipes. Hence her presence at the cannabusiness conference. In her words, “This is the most professional, focused, investment-oriented, visionary event that takes place in this industry.” It may also be the most surreal. Serving as the conference backdrop was Emerald Downs’ outdoor race course, visible through 100-foot-tall gallery windows. Inside, betting windows lined the meeting hall, and TV screens for broadcasting the races hung from the ceiling. Still, at $600 a head, this three-day cannabis confab attracts a more serious breed of entrepreneur than, say, Seattle Hempfest. Many are wage slaves looking for more meaningful work, midlifers plotting their second act, serial business owners in search of their next venture. A good number show up in ties or heels. Some are in it for the money. Others consider themselves artisans, much like a craft brewer or cheesemonger. Most gush about making history.

The timing of the conference couldn’t have been better. Two weeks earlier, a new Gallup poll reported that 58 percent of Americans now support legalization. Medical marijuana is legal in 20 states and Washington, D.C. In Colorado, the legal sale of recreational weed begins on Jan. 1. Washington State is poised to follow suit later in 2014. (The New Yorker just published a feature on the policy work that is going into Washington’s great recreational pot experiment.) A study released this month by ArcView Market Research, the financial analysis arm of ArcView Group, a cannabis investor network based in San Francisco, predicts that in the next five years, 14 additional states will pass “adult use” legislation. And then there are the financial forecasts. ArcView puts the legal U.S. cannabis market at $1.43 billion this year and $2.34 billion in 2014, an increase of 64 percent. “At this rate, U.S. cannabis sales will outpace the worldwide growth of smartphone sales,” read ArcView’s breathless press release. ArcView also predicts that by 2018, the country’s annual dope trade will be worth $10.2 billion.

As far as career paths go, many see cannabusiness as a winning ticket. “This is like a dream job, really. The money is great,” said a fortyish Las Vegas grower I’ll call “Raj.” (Raj, who’s also employed by a casino on the Vegas strip, didn’t want his real name used.) I approached him between conference sessions after watching him take reams of notes. He told me he’s here to schmooze and learn more about navigating the legal minefield of growing ganja. Back in Nevada, which permits medical marijuana, Raj feels like he’s always looking over his shoulder. He’s had his door kicked in by a SWAT team, his “assets” confiscated. It’s too late for him to meet Washington and Colorado’s residency requirements to start his own recreational weed business. (Colorado’s new pot law requires two years of residency; Washington requires three months. Neither state has said whether it will open another licensing window in the future.) But he’s interested in relocating to either state on the off chance he can find someone to hire him as a grower. “I don’t come cheap,” said Raj, who’s spent nearly two decades perfecting his cultivation techniques. “I do really, really high quality. I don’t know if I can be a Budweiser. I’m more of a Chateau Montenegro.”

Jobs and dollars aren’t all that’s at stake. Also on the line: reshaping the image of an industry that’s been underground for decades. “What happens in Washington and what happens in Colorado over the next few years will determine whether we roll prohibition back,” Alison Holcomb, criminal justice director of Washington State’s ACLU chapter and chief author of the state’s recreational pot law, said in a session called “Getting Recreation Right.” “All of us need to be really aware of the eyes that are watching us right now.” To elevate the profile of modern potpreneurs, the conference’s 30 speakers did their best to dispense handy takeaways: Be a good neighbor! Volunteer in your community! Don’t lie about the type of business you’re running! As with any business conference, snoozy PowerPoints crammed with lists and acronyms abounded.

Session topics ran the gamut: How to woo investors. How to manage your finances when no one will give you a bank account. How to find honest, reliable employees who don’t just want to get high on your dime. The real action, however, was on the expo floor, where dozens of marijuana companies shilled their products and services. Think vaporizers, sodas, tinctures, dispensaries, hemp shampoo, botanical extractors, hydroponics shops, potency testing labs, mobile payment apps, child-proof containers, custom printed stash bags, lawyers, accountants, insurance brokers, and business consultants. Some have catered to the cannabis world for years. Others are just lining up at the starting gate. Everyone wants to win big. MJ Freeway, for example, a Colorado corporation that’s been selling “seed to sale” tracking software in since 2010, already serves 450 dispensaries in 12 states as well as Canada and Europe. “We want to be the IBM of marijuana,” Amy Poinsett, the company’s CEO, said.

Not all these stories will have a happy ending. “Howard,” an unemployed Seattleite I met at the conference, had to declare bankruptcy after the DEA shut down his dispensary in May. (At the time, state law required 1,000 feet between pot shops and schools, playgrounds or daycare centers, measured by public roads and walkways. Federal law, however, defined this 1,000-foot buffer as the crow flies. Howard’s shop met the first requirement but not the second. The state has since amended its 1,000-foot rule to match that of the federal government.) Before becoming a potpreneur, Howard spent a decade as a successful IT consultant. Now his home is in foreclosure and he’s barely scraping by. Getting work in his former field has been difficult. Companies don’t want to hire someone with a two-year gap on their résumé. Or someone who freely admits to having run a pot shop. “It’s a crazy industry,” the 51-year-old said. “I’m just about done with it all.” So what was he doing at a cannabis conference? Research, for a consulting client he’s helping apply for a recreational store license. If all goes well—and it may not, considering the state has a finite number of licenses available for reefer retailers — Howard’s client will make him a full-time employee early in 2014. If not, he may move to Vegas to live with relatives. Howard remained upbeat as he spun his sad tale. Despite a couple of attempted robberies and dishonest employees, he enjoyed being a pot retailer. “I had a lot of true patients come in that we helped,” he smiled. “I had a lot of stoners come in, too. But who cares? They’re not hurting anyone.”

Industry leaders are hopeful the growing legitimacy of the marijuana market will help put an end to DEA shutdown letters like the one Howard received. “Change happens exponentially,” Aaron Smith, executive director of the National Cannabis Industry Association, a non-profit trade association, said on the expo floor. “Just a few years ago, people wouldn’t have thought that the Colorado and Washington experience would happen.”

To usher in this new era of professionalism, smoking pot at the conference was verboten. But old habits die hard. One vendor arrived with his own party bus, conveniently parked near the building entrance. “Any time I want to medicate, he lets me on the bus,” a young woman doing a lap around the expo floor said between bus breaks. Inside the bus, half a dozen people sat passing a vaporizer and eating M&Ms. A Canadian conference goer peered into the open doorway but declined to step inside. He worried he’d smell like dope while crossing the border on his way home.

Back in the conference, this juxtaposition of stoner and startup cultures was everywhere. One ancillary business owner on the podium stressed not writing off potential customers based on visual appearance. “A stoner can still be a qualified lead,” he said. “Just be sure to get it in writing.” Later, on a panel about finding capital, one investor implored the crowd to rise above the industry’s stereotypes. “It drives me crazy when someone comes in to pitch me and I can smell the product on them,” he said. During the next panel, which started at 4 p.m., the speaker made a feeble joke about how he’d understand if people needed to take a bathroom break at 4:20. At Hempfest, the crowd would have whooped and taken a collective hit. Here, they just gave a timid courtesy laugh and took notes.

Michelle Goodman is author of "The Anti 9-to-5 Guide" and My So-Called Freelance Life. Follow her on Twitter @anti9to5guide.