Can we trade Obama for Nixon?

Yes, liberals – Obamacare is a disaster, and one that reflects the fundamental weakness of Democratic ideology 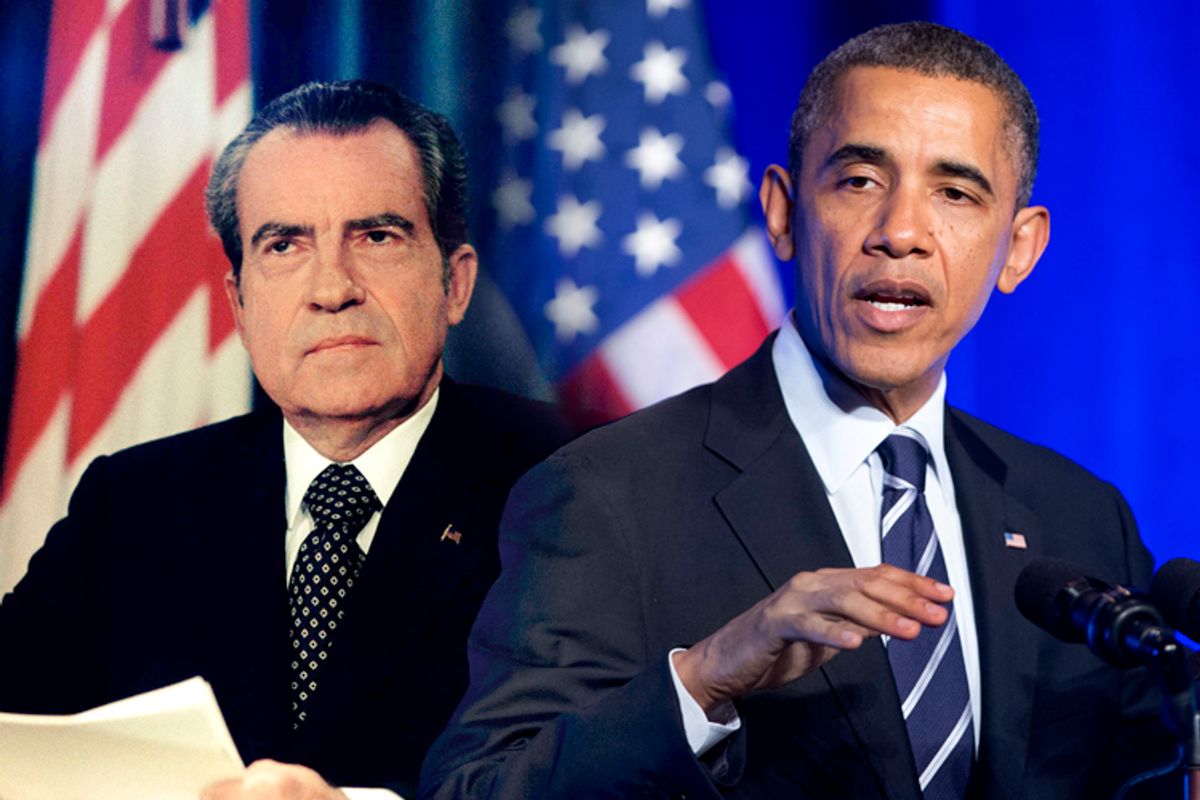 It’s difficult to know, in historical terms, how best to understand the monumental catastrophe of the Obamacare rollout. Is it yet another example of the pathological weakness and spinelessness of the Democratic Party, which never seems to get anything right and always prefers to negotiate itself into unnecessary compromise and ideological defeat? Or is it another symptom of our national refusal to pursue a rational and coherent healthcare policy, fueled partly by our bogus mythology of individualism and partly by the machinations of insurance-industry racketeers? Is there, to go one step further, a relationship between those two things?

I think the answers are clearly yes, yes and yes. But before we go any further let’s address those of you who’ve begun composing ardent letters explaining why the Affordable Care Act isn’t actually a disaster. (It has glitches, or bumps in the road. Mistakes, as they say, were made, although by whom is not clear.) Please try to imagine the following situation: Some treasured Republican policy venture, passed over staunch Democratic opposition – a privatized version of Social Security, let’s say – is launched under President Bush (or President Christie, or President Cruz, or President Pick-Your-Own-Scarypants). But the website repeatedly fails and crashes, only about one-fifth the expected number of people enroll in the first month, and one of the central rhetorical promises used to sell the bill in the first place turns out to be untrue. Now, would you be counseling your fellow citizens to be patient while the bugs were worked out, or would you be howling about how the whole thing was a failure that exposed the administration’s fundamentally mendacious character?

False equivalency, you say? Because one thing is good and the other bad, one a crucial progressive reform worth defending at all costs even if it’s been mismanaged, and the other a despicable unraveling of the New Deal? Sure, maybe. I’m familiar with the supposedly hard-headed, realpolitik argument: You focus on achievable goals rather than pie in the sky, and as half-baked and jury-rigged as the Obamacare reforms may be, they can serve as the gateway drug to a national healthcare system, in much the same way that Social Security, Medicare and Medicaid have all been expanded since their introduction. That’s exactly what the Republicans feared, of course, and why they went through the whole ludicrous theater of another government shutdown, making themselves look like a pack of incompetent, rudderless, quarrelsome buffoons.

But who’s wearing the clown nose now? Barely a month after the misbegotten shutdown, Obama has handed the Republican congressional majority all the political momentum they had thrown away and then some, a gift-wrapped invitation to win big in 2014 and continue the polemical paralysis of Washington into the indefinite future. As I and many other people have said already, Obama’s legacy is permanently contaminated by his immense expansion of the national-security state, by the global drone wars and the Panopticon-style electronic surveillance of everyone, everywhere, at all times. Now he’s on the verge of also becoming the president who had the chance to transform our overpriced, underperforming and profoundly unjust healthcare system in his grasp, and fumbled it at the last minute, Joe Pisarcik-style. (Younger readers: Google is your friend.)

I have no explanation for how a presidential candidate whose sophisticated, high-tech campaign became the envy of wonks everywhere turned into a president whose central policy initiative has crashed and burned amid 1990s Web architecture and a forest of 404 notices. It defies all logic, except for the fact that if Obamacare hadn’t been such a complicated mishmash with dozens of brand-new moving parts – if it had been, for instance, a national expansion of Medicaid to all Americans – then Murphy’s Law and red-state resistance and bureaucratic incompetence would have had less room to flower and bear fruit. This is a speculative and inferential case, maybe even a superstitious one, but I can’t resist it: As enacted, the Affordable Care Act is an ugly concoction, unloved by anyone except, perhaps, the insurance-company lobbyists who shaped its final form (and their loyal lackey Joe Lieberman). It’s a WTF law, a better-than-nothing law; everyone who touched it did so with distaste, and it was always likely to produce chaos.

Just to be clear, I personally hope that the wreckage of Obamacare can be duct-taped together, because it genuinely is preferable to the current “system,” which is more like an anti-system, a howling Lovecraftian void of quasi-libertarian delusions that serves both patients and doctors poorly and whose principal beneficiaries are the big shareholders and top executives of insurance companies, pharmaceuticals and healthcare consortiums. But the fact that a Democratic president who’s perceived as a liberal and has been comfortably elected twice had to fight so hard for such a patchwork law testifies to the ideological weakness of his party, which has been dragged inexorably to the right ever since its historic schism between Cold War liberals and antiwar activists in 1968, and often appears to have no clear principles and no core constituency beyond New York lawyers and Hollywood celebrities.

Obama’s Affordable Care Act, and the even more badly botched Hillary Clinton healthcare reform effort of the early 1990s, have one thing in common (along with their aura of failure). Although derided by right-wingers as Marxist social engineering, both are enormously less ambitious, and more obsequious to the so-called free market, than the comprehensive national health insurance law proposed, within my lifetime, by a United States president. Modeled closely on programs enacted in major Western European nations, the Comprehensive Health Insurance Plan, or CHIP, would have offered identical healthcare coverage to all Americans, irrespective of age or income (and with no exclusions for any reason), through three separate but interdependent programs: One for people with full-time jobs, through their employers; one for the unemployed, disabled and poor (replacing Medicaid); and an expanded version of Medicare providing full healthcare coverage for all senior citizens.

You already know the punch line here, right? “Comprehensive health insurance is an idea whose time has come in America,” concluded Richard Nixon’s special message to Congress on Feb. 6, 1974. It’s entirely possible, and even likely, that if Nixon’s presidency hadn’t been consumed by the Watergate scandal – he was forced to resign exactly six months later – no one alive today under the age of 40 would even remember a time before national health insurance. Now, it’s also true that Nixon was trying to head off more liberal single-payer schemes, on the British or Canadian model, that would have cut private insurance companies out altogether. But those ideas all died on the vine, and none of the three Democratic presidents of the past four decades has ever dared to dream of proposing anything close to the Nixon plan.

There’s a right-wing stereotype that Democratic presidents are weak-kneed wafflers, and it’s hard to avoid the conclusion that conservatives are right about that, but for the wrong reasons. That “weak Democrat” rhetoric is a legacy of the party’s implosion in 1968 – when buried conflicts between liberals and leftists boiled to the surface – and the George McGovern debacle of 1972, after which the Democratic establishment began to move decisively away from progressive economic policies and the party’s working-class base. Still, Nixon’s 1974 proposal signals how much influence an old-school, more muscular version of liberalism still wielded in Washington at the time; he believed his only shot at preserving private-sector health insurance was to make it universal, comprehensive and regulated at the federal level (much as it is today in France or Germany). But in a startlingly brief period, everything would change.

Jimmy Carter is a profoundly decent man with an appealing global vision, but he had no connection to either old-school Democratic liberalism or the party’s more activist wing. He wasn’t prepared for the dirty politics of Washington, didn’t staff his White House well and was fatally sandbagged by unforeseen events, mostly the Iranian hostage crisis. By the time Bill Clinton was elected after 12 years of Reagan and George H.W. Bush, Lee Atwater had meticulously milked racial grievances to peel away much of the white working class and nearly all the white South. Clinton convinced himself that the only way to govern in the aftermath of Reaganism was through the noxious politics of “triangulation,” which produced welfare reform, “don’t ask, don’t tell” and the enormous neoliberal, job-exporting scams of GATT and NAFTA. We can debate the reasons for the relative prosperity of the Clinton years (no overseas wars to fight), but Clinton was every bit as much a Wall Street president as George W. Bush, helped drive the stock-market and real estate boom that would later turn toxic, and on most substantive policy questions found himself to the right of every 20th-century Republican president not named Ronald Reagan.

Democratic apologists may be correct that the party has done the best it could to adapt to screwy circumstances, and that no Democrat could have been elected president since the Reagan revolution if the party hadn’t shifted right in pursuit of soccer moms, Silicon Valley entrepreneurs and (just for instance) insurance executives. But the result is that one of our only two political parties – and don’t start talking about third parties, because that’s not happening in my lifetime or yours -- possesses no clear convictions, beyond the desire to be slightly less obnoxious than the other one. We don’t get to rerun history in a lab and find out if different tactics produce a different long-term result, but political scientists tell us that a large proportion of the population favors economic policies (national health insurance included) that lie to the left of anything that either national party supports.

Obamacare is far from the worst item on the long list of dishwater Democratic policies that seem slightly better than a poke in the eye with a sharp stick (or, in the case of many of Clinton’s policies, slightly worse) but don’t inspire anyone and are fundamentally confusing. How’s that for an endorsement? If the damn thing ever works, it’ll represent a baby step toward sanity. But I’m not holding my breath, and anyway that doesn’t begin to undo how far backward this country has moved in 40 years. If you’ve got a time machine and want to go back and give Tricky Dick the tools to make the Watergate evidence disappear, NSA-ninja style, I’ll have your CHIP card waiting for you when you get back.