By pursuing targeted assassinations, President Obama could be undoing the concept of what a "just-war" means 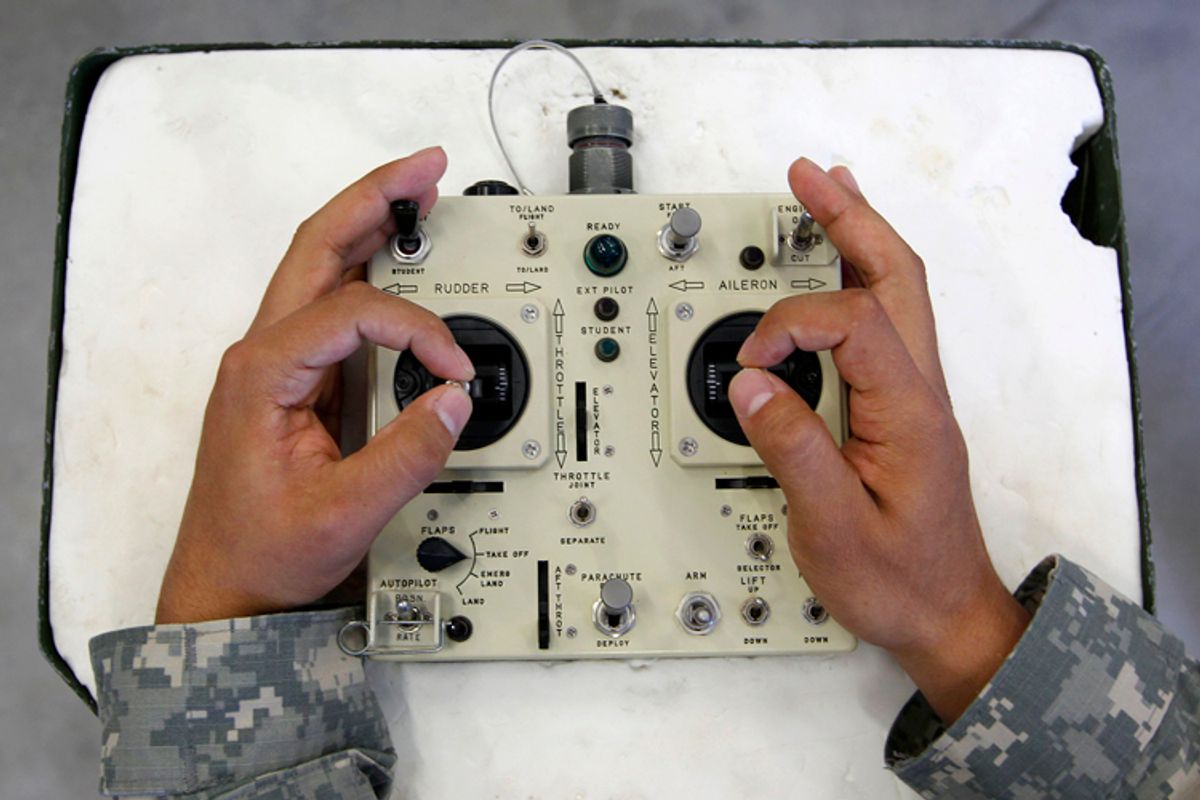 Do the United States and its people really want to tell those of us who live in the rest of the world that our lives are not of the same value as yours? That President Obama can sign off on a decision to kill us with less worry about judicial scrutiny than if the target is an American? Would your Supreme Court really want to tell humankind that we, like the slave Dred Scott in the 19th century, are not as human as you are? I cannot believe it.
—Bishop Desmond M. Tutu, letter to the New York Times, Feb. 11, 2013

A letter written by Bishop Desmond M. Tutu to the editors of the New York Times in February 2013 referred to an article that had appeared in that paper about an idea floating around the hearings on John Brennan’s nomination to head the Central Intelligence Agency—the idea of a special court to vet the killing of American citizens. Even the most ardent drone supporters had become nervous about setting a precedent when it came to targeting citizens. But Tutu’s letter challenged all drone warfare. The Nobel Peace Prize winner tied the deadly use of drones to the 1857 Dred Scott decision in order to place claims of moral outrage at the top of the agenda. He did not concern himself with arguments about the precision of drone attacks or that fewer people died as a result than would have been the case in bombing raids. He argued instead that drones were a weapon used exclusively for death-dealing strikes within countries the West sometimes called “failed states,” populated by non-Western peoples.

The failure to understand Tutu’s point offers evidence of just how far American policy makers have sealed themselves into their Hazmat suits. But a few have not, such as Hank Crumpton, a former CIA Counterterrorist Center officer who told Mark Mazzetti there should be a huge debate about when and where we apply lethal force. In a place like Yemen or Somalia or Pakistan, he said, “it seems like just another part of war.”

But, he asked, what if a suspected terrorist is in a place like Paris, or Hamburg, or somewhere else drones can’t fly, “and you use a CIA or [military] operative on the ground to shoot him in the back of the head?
“Then,” he said, “it’s viewed as an assassination.”

From the opposite end of the spectrum came a warning that Tutu’s argument could not be ignored, for it reflected a general shifting of the sands of ethical warfare away from the old just-war theories, like those advanced by Tutu’s fellow Nobel Peace Prize laureate President Barack Obama. Western society, with its growing concerns about torture and the universal nature of human rights, had moved toward “an increasingly empathetic culture,” wrote James Jay Carafano, a foreign and defense policy specialist with the Heritage Foundation. Carafano was hardly happy about the implication, as he saw it, that “feelings rather than reason” would come to rule international affairs. The just-war tradition that Obama had invoked from the time of his Nobel speech was falling before the onslaught of the “lawfarers,” whose efforts to blur the line between law and political advocacy threatened to “undermine America’s legitimate efforts to exercise its sovereignty and act in its own interests as it sees fit.”

All the same, he conceded, President Obama’s passion for drones had speeded up the undoing of just-war doctrine: “The president may have to ponder if he accelerated that change by pursuing a strategy fixated on playing global whack-a-mole with terrorist leaders. An overreliance on technological ‘fixes,’ after all, always strikes a nerve among people who prize the heart far beyond the head."

Others might argue that technological fixes in warfare such as the atomic bomb had ruled both the head and the heart of many Western policy makers, especially in confrontations with “backward” societies. From the beginning, the whole idea of the “American way” of war preferred using machines to avoid losing men. Metropolitan armies rode tanks, flew airplanes, and dropped bombs from the skies. But the point to consider here is that President Obama’s second term opened with perhaps the most significant debate—or at least the potential for a debate—about the nation’s direction in both foreign and domestic policy since the end of the Cold War. George H.W. Bush had pursued a “new world order” by driving Noriega out of Panama and chasing Saddam Hussein out of Kuwait. Clinton used airpower in Kosovo. After 9/11 George W. Bush focused on Iraq’s imaginary weapons of mass destruction, and so could not find Osama bin Laden; President Obama had accomplished closure on that era by bringing its author to “justice.”

But the Game of Drones continued, with the stakes getting ever higher, or lower, depending upon one’s viewpoint. The idea of a special court—one that would meet in secret to oversee death sentences—was in the air at the time of the Senate hearings on Brennan’s nomination. But also before the public eye was a sixteenpage Department of Justice white paper leaked to NBC News, a document that derived from still-secret memos from the Office of Legal Counsel used to justify the killing of Anwar al-Awlaki.

Various members of Congress had requested access to those memos on fourteen different occasions since February 2011, continuing right up to the Brennan hearings two years later—without success. During lawsuits to see the memos brought by the American Civil Liberties Union and the New York Times, government lawyers argued that the plaintiffs had not defined what was meant by calling for documents about a “targeted killing program,” as if such a program did not exist. The Senate Judiciary Committee under Democratic control supported the administration’s noncompliance in the requests. But Iowa Republican Charles Grassley complained that on January 20, 2009, the newly inaugurated President Barack Obama promised his would be the most transparent administration in U.S. history. “So we’ve got a license to kill Americans, and we don’t know the legal basis for the license to kill Americans. And we oughta know that. And we’re not going to find out if we don’t legislate it because our letters haven’t been answered.”

We’re not mere supplicants of the Executive Branch. We are a coequal branch of government with the Constitutional responsibility to conduct oversight. . . . So it is insufficient to say, “[P]retty please, Mr. President, pretty please, Mr. Attorney General, will you please tell us the legal authority by which you claim the authority to kill American citizens abroad?” It may be that I would agree with their legal argument, but I simply don’t know what it is, and it hasn’t been provided.

The Department of Justice memorandum would be the closest thing to an official response that Congress would get—and it shocked readers out of their post–inaugural parade daydreaming about the next four years.

Although the administration was careful to say that nothing “classified” had been revealed in the memo NBC News obtained, the language of the memo certainly suggested it was an amalgam of the still secret justifications locked away in Attorney General Holder’s safe. By leaking the document and not calling it “classified,” the administration apparently hoped to satisfy demands for more information and clarification without breaking with its stolid insistence that “national security” issues were at stake should the actual memos be released.

If one was not disturbed reading the early sections of the white paper, on page fourteen there was this sentence: “A lethal operation against an enemy leader undertaken in national self-defense or during an armed conflict that is authorized by an informed, high-level official and carried out in a manner that accords with applicable law of war principles would fall within a well established variant of the public authority justification and therefore would not be murder.” Who would qualify as an informed, high-level official? A new CIA director, John Brennan, who for four years had been known as the “czar of drones”? The chair of the Joint Chiefs of Staff? A drone pilot who spotted a target of opportunity from the kill list?

When the white paper appeared, the “informed” public had not yet absorbed all the revelations about presidentially decreed death sentences from six months earlier, or the follow-up story about the White House concern to write a rule book lest someone less trustworthy win a presidential election and gain entrance to the Oval Office. But John Bellinger, a legal adviser in the State Department during the Bush years (the post now held by drone defender Harold Koh), had already expressed concern about the legal risks of heavy reliance on drone warfare. He feared it could become Obama’s “Guantánamo.” The problem was that the legality of drone warfare (as it was practiced by the United States) had not been accepted by other nations, including America’s allies, and human rights groups. For a time Bellinger had thought that there was only a 25 percent chance these criticisms would malign the administration, given the overwhelming support Obama had when he became president. “But over the last eighteen months,” he wrote in January 2013, “I have seen a crescendo in international criticism, resulting in lawsuits in the U.S., Britain, and Pakistan, and a potential decrease in intelligence cooperation . . . I would not be surprised if, in the next year, war crimes charges are brought against senior Obama officials in a European country with a universal jurisdiction law. The Administration is increasingly on the back foot internationally in explaining and defending the legal aspects of the drone program. It needs to step up its efforts.”

Copyright © 2013 by Lloyd C. Gardner. This excerpt originally appeared in "Killing Machine: The American Presidency in the Age of Drone Warfare," published by The New Press. Reprinted here with permission.