5 rules for being a grown-up 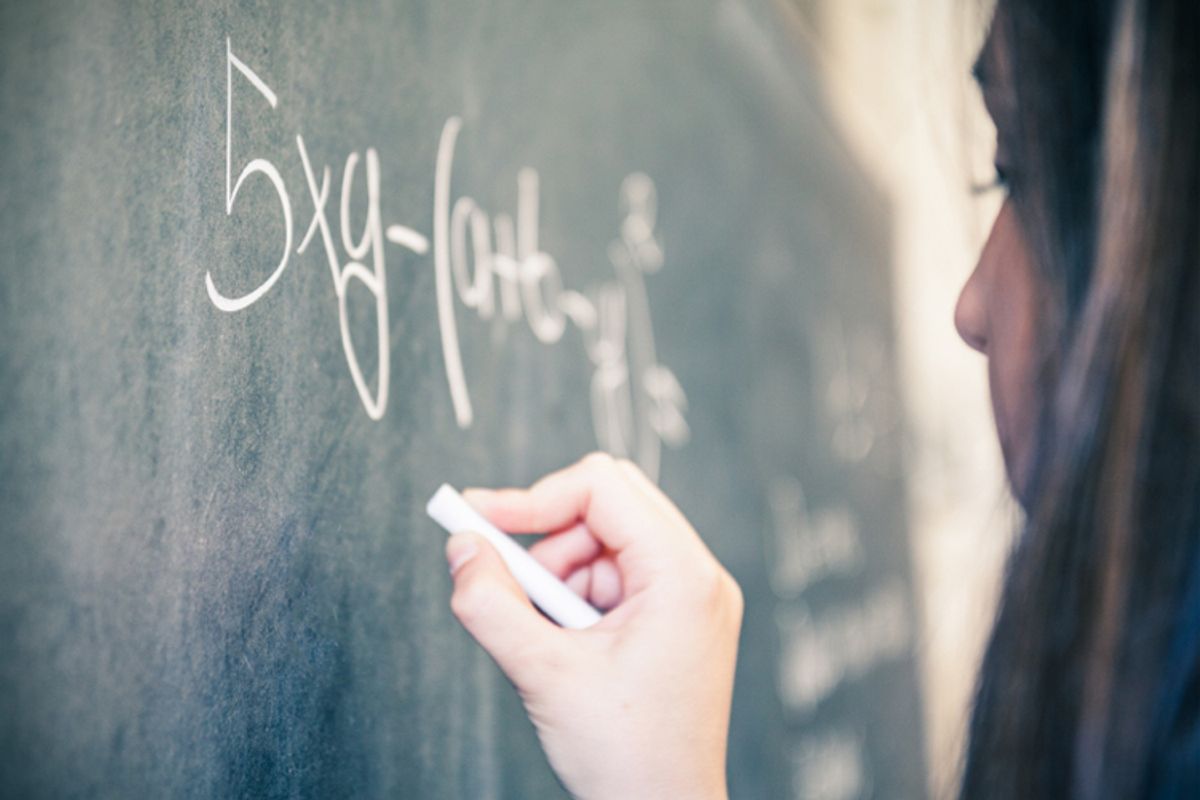 Of the many things I don't excel at – dancing, parallel parking, acting happily surprised when I really don't like a Christmas present – my worst is math. I am hopeless at math. But we're not supposed to say such things anymore, right? Not since last month, when, in a widely disseminated Atlantic piece, Miles Kimball and Noah Smith attempted to bust the notion that aptitude is a native ability and prove that "inborn talent is much less important than hard work, preparation, and self-confidence."

The story was a compelling and very specific challenge -- as well as an offer of reassurance -- to the many of us who suffer from straight-up math terror. Kimball and Smith insist, reasonably enough, that "Math is the great mental bogeyman of an unconfident America" and "Too many Americans go through life terrified of equations and mathematical symbols." Believing you're just dumb at some things isn't accurate, the authors say, and worse, that belief holds us back in our education, careers and lives in general. What we assume is the condition of not being "a math person" can be overcome the same way ordinary students across the world do it – by just putting in the time and trying harder to get better at it. And while I don't entirely agree with everything the authors say – for real, even basic math concepts flummox me – their message of just putting a little more backbone into it, whatever it is, is one that needs to be stated again and again.

From the time we're kids, we define ourselves not just by who we are but who we are not. Not a jock. Not a band geek. Not a science nerd. We define ourselves by what we don't like and what we're not good at, slipping into comfort zones that can become both our easy excuses and our virtual prisons. And we embrace the stereotypical helplessness of our respective gender roles, as dudes who explain they just don't know to do laundry and ladies who insist they're simply not good at negotiating.

So let's take the affirmation that we can master things we weren't born prodigies at (P.S. nobody is a born housework-doing champion) as an incentive to apply ourselves a little harder to the things that grown-ass people of both sexes should just plain know how to do. We need to let go of our "bad at math" mind-sets, wherever they apply, and cultivate our own competence. This is what is known as being a well-rounded person who can function in the world.

We have to move. I am weak and slow and uncoordinated. The way things are going, looks like that's not going to ever change much. But I still do some form of physical activity every day, because human beings were designed not to sit in front of glowing screens all day but to move around. Want to be healthy? You don't have to be an Olympics contender. You don't have to run if you don't like to run and you don't have to spend a lot of money if you hate the gym. You do, however, have to exercise, consistently. Your low blood pressure and not-overtaxed heart will thank you.

We have to feed ourselves. I am a natural cook. (I'm not bragging; my roast chicken will do that for me.) I am not, however, some foodie whose kitchen looks like a Williams-Sonoma. Few of us are. Let go of the idea that you're too busy, or unskilled, or what the hell, you'll just have a Luna Bar. You need to feed yourself so you're not eating crap out of boxes you know isn't good for you, and so that you can feed others, like your family. Put down the damn Luna Bar and make yourself an omelet or some spaghetti. It's not hard. And it gets easier, quickly.

We have to be able to write a coherent sentence. Know this: There are many, many occasions in this world in which auto-correct will not save your butt. Stop hiding behind the excuse that you're the data person or you're better face-to-face or whatever. This thing you're composing is not a searing opus for the New Yorker; it's what? An email to a co-worker? A friggin' text? I know, yeah, you're in a hurry because you have a thousand other tasks to do, but the written word deserves a little respect. Clear communication needs to be a priority. Write your message. Now take a minute to read it back and ask yourself, does this make a lick of sense? If the answer is yes, then and only then hit "send."

We have to think about other people. Technically, you could, if you chose, swan through life never giving a subway seat to a tired-looking pregnant lady or opening a door for a person with a walker. You could forever fall back on the "I don't 'do' birthdays" excuse for not sending your mom a card. But just understand that would make you a selfish brat. Adults move through the world with the knowledge that they share it with others and then they show up on time for your social engagements. So grow the hell up and shut off your phone during the movie.

We have to do the math. As I believe I have mentioned, I am bad at math. When splitting a check in half -- half! -- I reliably figure it out wrong. (How is this possible? I don't know either.) I do a lot of crying while balancing my checkbook, and not just for the usual reasons. I chose my college in part because there was no math requirement. I now muddle by with the help of calculators and software, though if I'm doing basic figuring – money, distances – I usually try to do it manually first, to stay in the habit of doing the actual work of math. Why? Because a grown-up needs to be able to maintain a budget and not run away when her kid asks her to check her homework. That's just how it is.

We can't be instinctively adept at everything. But this is life. The really talented people practice their skills to get great at them. And the mediocre among us have to put in more work to be simply passable, because that's what being a responsible person looks like. It isn't flashes of genius. It's humble accounting and soup making and business correspondence and making your bed. It isn't being brilliant. It's just being an adult.