Don't buy the spin on Guantanamo: "Closing" it doesn't mean what you think

The dirty truth: There's a big difference between "transferring" the prisoners -- and actually releasing them 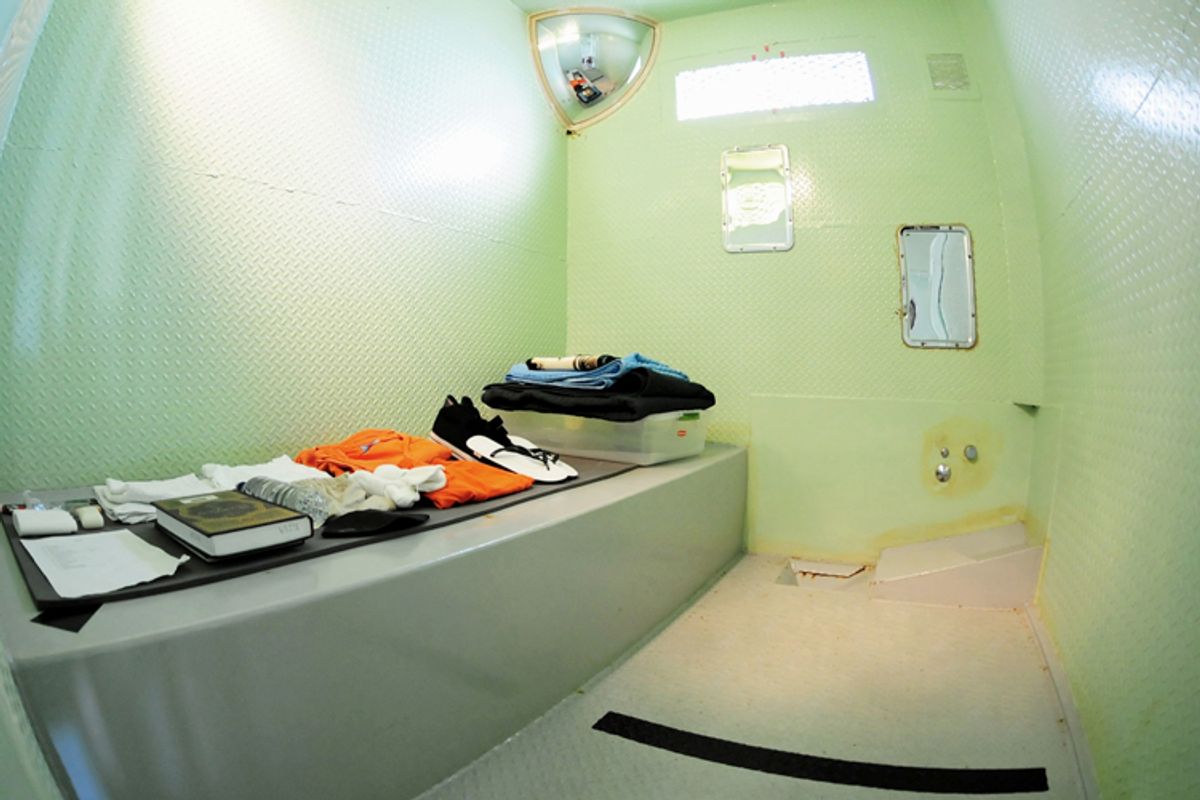 Technically, President Obama appears to be making strides on his 2008 promise to close down Camp Delta at Guantánamo Bay Naval Base. But despite Fox News’ takeaway, let’s not get confused: closing down the prison has little to do with releasing the remaining prisoners, some of whom have been held there for nearly 12 years—almost none of them ever charged with a crime.

In fact, closing down the prison doesn’t clear up the issue of what will happen to the 164 prisoners, all of whom are foreign nationals, except that they will be “transferred,” a term that can mean whatever the President wants it to mean: relocating prisoners to another prison, releasing them to the custody of their home governments, placing them in “rehabilitation” facilities, or just simply: get them off the base.

The ACLU, surprisingly, didn’t speak to that distinction when it showcased the costs of keeping Guantánamo open over the last decade. They pointed out the millions that could be allocated to other important programs by “transferring detainees” out of Guantanamo: keeping down healthcare costs for military families, fully funding assistance in transitioning U.S. veterans to civilian life, covering the military’s body armor budget, funding prosthetics research (presumably for vets who lost limbs).

To be fair, the confusion can be partly attributed to the President’s waffling on the issue. He has offered several renditions of  “closing down” Guantánamo: Shortly after he took office in his first term, he conceded that some of the prisoners, despite lack of sufficient evidence or due to “contaminated” evidence, could never be tried. By implication, they could never be released.  Sometime after that, he toyed with the idea of relocating them to a new prison in Illinois. That plan would have allowed him, technically, to keep his promise to close Gitmo. Protests from various corners of the U.S. quickly put a kibosh on that idea.

More recently, the Obama Administration has been in talks with the Yemeni government to transfer somewhere between 55 to 80 Yemeni prisoners to Sana’a, on the condition of a new Guantanamo prison rehabilitation facility of some sort being built there. It would be funded by anyone but the U.S. — most likely the Saudis, who according to the LA Times, have had a successful track record of “rehabilitating” terrorists, presumably so that they will not fight back (against governments who’ve done them harm). The U.S. has promised that the “rehab” would include “counseling, instruction in a peaceful form of Islam, and job training in Yemen before any decision on freeing them.”  Still, I shudder to think which other tactics will be used. See this recent clip, which shows torture being inflicted under the watchful eye of American military personnel in Afghanistan (warning: it is extremely violent). Is it unreasonable to anticipate that that the transfer of Yemeni detainees to Sana’a will be accompanied by the transfer of torture, death, and harm to their families?

Given its own track record, the Yemeni government hardly inspires confidence in the promise of ethical treatment: at times, it purports to represent the interests of the families of the Gitmo prisoners; in the same breath, it reveals itself to be a faithful servant of the U.S. by justifying or covering up U.S. drone attacks into Yemen. And now, it is engaging in negotiations with the U.S. to build a prison/halfway house to house the as-of-yet uncharged Yemenis, going so far as to offer to pay for it before rescinding its offer due to a tight government budget. It is noteworthy that the home-governments of other Gitmo prisoners have refused to imprison them again upon “transfer,” on the grounds that they have not been convicted of any crimes.

Like me, Sen. Saxby Chambliss also thinks transferring prisoners to a prison in Yemen is a bad idea, but for different reasons. Chambliss believes that the Yemenis, at least 20 of whom have been deemed “low-risk” detainees, would be a danger to the U.S. even if they were not released but transferred to a Yemeni prison. Chambliss’ logic makes sense, and could even construed be an implicit acknowledgment that the U.S. has treated these prisoners abominably. After all, if the agents of a foreign government kidnapped and tortured you, threatened to hurt your family, locked you up in a tiny cage for twelve years while guards disciplined and humiliated you, mashed up your Bible, periodically beat you for having the temerity to be unsatisfied with the arrangement, and challenged your ability to hunger strike by violently forcing a tube up your nose three times a day— all without ever charging you with a crime or showing evidence of wrongdoing -- you’d be angry enough to dream of ways of getting back at that government and its officials if you were ever released.  Thomas Jefferson suspected as much back in 1781, when he suggested that after emancipation, ex-slaves should be expelled for fear of retaliation against their former owners for the inhuman treatment they had received.

But Chambliss’ fears are not substantiated. As Adam Hudson cites in a brilliant analysis of the supposedly concluded Gitmo hunger strikes, the “recidivism rate” for released Guantanamo prisoners is 4 percent. That low rate suggests that these men, if they ever were prone to violence (which we can’t determine, given the lack of evidence) are remarkably forgiving of those who have inflicted serious violence and other wrongdoing on them.

There are other reasons to oppose “transferring,” rather than releasing prisoners. Relocating human beings who’ve been caged for 11 or more years— despite any public evidence of wrongdoing--to a prison in another country is yet another feature of the quest for global hegemony by the U.S. empire.  The Post-Human Rights State, we might call it.

In this instance, U.S. imperial power, disguised as a liberal polity concerned with protecting the freedom and rights of all human beings, is revealed when it selectively showcases certain human rights that support the destructive actions planned by the state. WMD’s in Iraq.  Women’s rights in Afghanistan. Such “principles” are clearly exhorted almost exclusively to enable voters to support otherwise dubious or indefensible policies.

The issue here is one of principle as well as of realpolitik. Under the Bush Administration and its minions, heinous and unconstitutional actions were undertaken in the name of national security. Those minions, as we know, included plenty of Democrats, like Senators Feinstein, Kerry, and Clinton, who approved and supported those actions. Counter-terrorism, as we now understand it, is about selling out human rights principles in the name of American security while chiseling away at the rights long claimed by American citizens and residents: free speech, privacy, dissent, knowing the charges that warrant my arrest, fair trials before an impartial judge, publicly shared evidence in order to convict.

The Obama Administration unabashedly continues the destruction that the Bush Administration began in 2001 in the name of national security.  Highlights include pushing for NDAA 2012; winning back on appeal (in the lawsuit filed by Chris Hedges, Alexa O’Brien and others) the right to detain people infinitely (sic) with impunity; wiretapping Americans, foreigners, the press, and heads of state alike; and persecutingwhistleblowers through dubious laws and the revocation of passports, and in collusion with foreign governments.

It is not possible to continue to violate the freedom and bodies of so many people — American or foreign, citizens or otherwise -- without confronting the inevitability that those chickens will come home to roost. I don’t mean revenge. History has disproven Jefferson’s fears wrong, despite the continued persecution and mass imprisonment of Black Americans up to this day. I mean the disintegration of a society that claims to respect the bodily and psychic integrity of human beings to live and speak without fear of despotic retribution. Consequently, the United States can no longer credibly claim to be a beacon of democracy or protector of rights without hearing the loud, widespread, jeers of derision and contempt from the victims of the US’s unceasing violence: the families of droned Pakistanis and Yemenis as well as those of Gitmo detainees who have already ended their own lives; the family and friends of Aaron Swartz, as well as those of Chelsea Manning, Barrett Brown, John Kiriakou and many others. The list is long, too long.

In the face of this knowledge, closing Guantanamo and releasing its uncharged prisoners may be a trivial act. But it would constitute one step in the right direction — of trying to observe human rights principles while beginning to forge international relationships on a basis other than the force embodied in the long reach of destructive weapons and aggressive, unchecked, despotism. Perhaps then, we might be able to look forward to reclaiming the US’s integrity as a champion, rather than the destroyer, of human rights.