I could have been Renisha McBride

I was a young black woman knocking on a white stranger's door. But she treated me like a person, not a threat 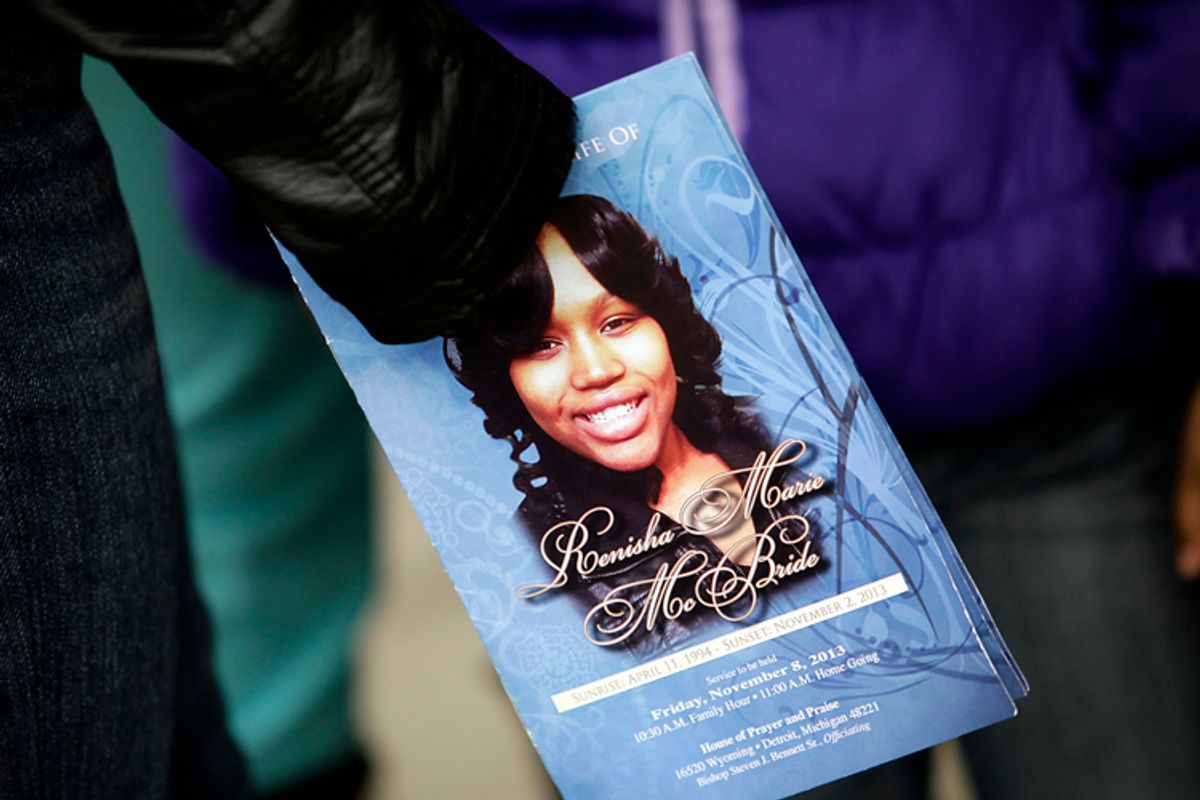 Seeking help while black has become a deadly proposition. On September 14, former Florida A&M football player Jonathan Ferrell crashed his car near Charlotte, North Carolina. Ferrell sought help in the early morning hours at a nearby home. The frightened homeowner called police, claiming an intruder was trying to break in. Police arrived and shot Ferrell ten times. Ferrell was 24 at the time of his death. The officer who shot Ferrell has been charged with voluntary manslaughter.

Renisha McBride, a 19-year-old graduate of Southfield High School, was involved in an automobile accident on November 2 in which she struck a parked car in the city of Detroit. Instead of staying with her vehicle, McBride walked away and wound up at the home of Theodore Wafer, 54, in neighboring Dearborn Heights, Michigan – a short distance from the scene of the car accident. McBride’s family believes their daughter knocked on Wafer’s door seeking assistance. Wafer allegedly shot McBride in the face through a closed screen door. Two weeks after shooting McBride, Wafer was charged with 2nd degree murder and manslaughter, along with a felony firearms charge.

In both the Ferrell and McBride cases, an African-American person needed help after an automobile accident and wound up dead – one shot by the police, the other shot by the homeowner. In both cases, the dead have been regarded as complicit in their own deaths. Although Ferrell’s toxicology report came back clean, Ferrell was likely disoriented after surviving a serious car accident, and thus failed to comply with officers' commands to drop to the ground.McBride, by contrast, was found to have been legally intoxicated at the time of her shooting. McBride's intoxicated state is likely to play a significant role in Wafer’s claim that he shot McBride in self-defense.

McBride’s case, in particular, struck a nerve with me. Years ago, I was a young African-American woman who found herself seeking assistance from a stranger in a predominantly white Michigan community after having had too much to drink. The year was 1987, the city was Ann Arbor, and the occasion was my graduation from the University of Michigan. My pals and I had begun the day drinking cheap champagne in celebration of our big moment, and we each brought champagne bottles into Michigan Stadium with us, tucked into our graduation gowns. We continued passing bottles around during the ceremony. By the time graduation had ended, I was quite drunk.

My friends met up with their families right after the ceremony, but in those days before cell phones and GPS, I couldn’t locate my family or call them. I decided to just walk back to my dorm. Problem was, in my drunken state, I couldn’t find my way. Still wearing my cap and gown over my graduation dress, hose, and pumps, I walked the blocks near the stadium for what felt like hours, unable to accurately navigate the relatively short distance.

The walking sobered me up a bit, but it also made me acutely aware of a serious issue – thanks to all that champagne, I needed to use the restroom, and a public one was nowhere in sight. Being female, I couldn’t just step behind a tree or car and relieve myself. So I did the only thing I could think to do – I knocked on a stranger’s door.

A young white woman answered the door, holding a toddler on her hip. “May I help you?” she asked nervously through the screen door.

I spoke bluntly about my predicament: I just graduated, I can’t find my parents, I’m trying to walk back to my dorm, but I was drinking at graduation and now I really need to use the bathroom.

“My husband’s not home,” the woman replied, looking scared and nervous.

“Lady, I understand, but I really have to go and I’m not even sure I can make it off your porch,” I said. “Please. I know this is asking a lot, but it's my graduation day. I can’t pee on myself.”

For whatever reason, the woman opened her screen door and let me in. She told me where the bathroom was, and I ran upstairs.

I knew she was afraid, but I was afraid, too. I was afraid that while I was in her bathroom, she was calling the cops. I made it quick, washed my hands, thanked her again, and left. Shortly after I left the woman’s home, I spotted a taxi, hailed it, and went back to my dorm – where my family was angrily waiting for me. They loaded my things from my dorm room into the car, and we left. I was teased endlessly at my graduation dinner, but the rest of the night was otherwise uneventful.

I have thought often of that young mother over the years. I suspect in the current climate, not only would she not have opened her door to me, she would have called the police. If I’d wound up shot to death – whether by the homeowner, or by the cops – my life up to that point would have been reduced to the same nothingness that McBride’s life has been reduced to: young black woman from Detroit, intoxicated, blood alcohol level of 0.218. People would have justified my shooting, just as some are justifying Wafer’s shooting of McBride.

I’m grateful that, when that young white homeowner saw me, she didn’t see a scary black woman from Detroit – she saw a young woman who had gotten herself in a stupid predicament. But I’m not suggesting that the woman who called the police on Ferrell, or even Ted Wafer, should have done like that young woman in Ann Arbor, and opened their doors. In each of those scenarios – including my own – I’m fairly certain I wouldn’t have opened the door. My point is simply that the young woman who opened her door to me was able to see me as a person and judge accordingly. It is beyond shameful that recent events have made such kindness feel like an anachronism.

In 1964, Kitty Genovese, a 28-year-old Italian-American woman, was murdered outside her home in the Kew Gardens section of Queens, New York. At the time, it was reported that 38 of Genovese’s neighbors watched her die, but not one called police. Although the notion that 38 people watched her die was later found inaccurate, Genovese’s murder came to represent the callousness of not helping a neighbor in need. It remains to be seen whether outrage over the Renisha McBride case marks a turning point in American culture in the same way as Kitty Genovese, but it’s time for Americans to examine our cold indifference to strangers in distress – particularly those of a different race.

To the extent our nation ever had an empathy chip when it came to its black citizens, it has certainly gone missing as of late. But we – whether law enforcement or private citizens – cannot continue to treat African-Americans as if all are presumed guilty until posthumously proven innocent. Just as a nation re-examined itself after the Genovese murder and found its callous indifference to her suffering unacceptable, we must do the same in the aftermath of the McBride and Ferrell cases. We may have just cause not to open our doors to strangers who knock in the middle of the night, but we also have a moral obligation to ask ourselves why we presume that the stranger who is black means us harm – and why we are not more outraged when that presumption is used as license to kill.