What I learned as Captain America in a turban

When I walked around NYC in a superhero costume, I had no idea the effect it would have on strangers -- or on me 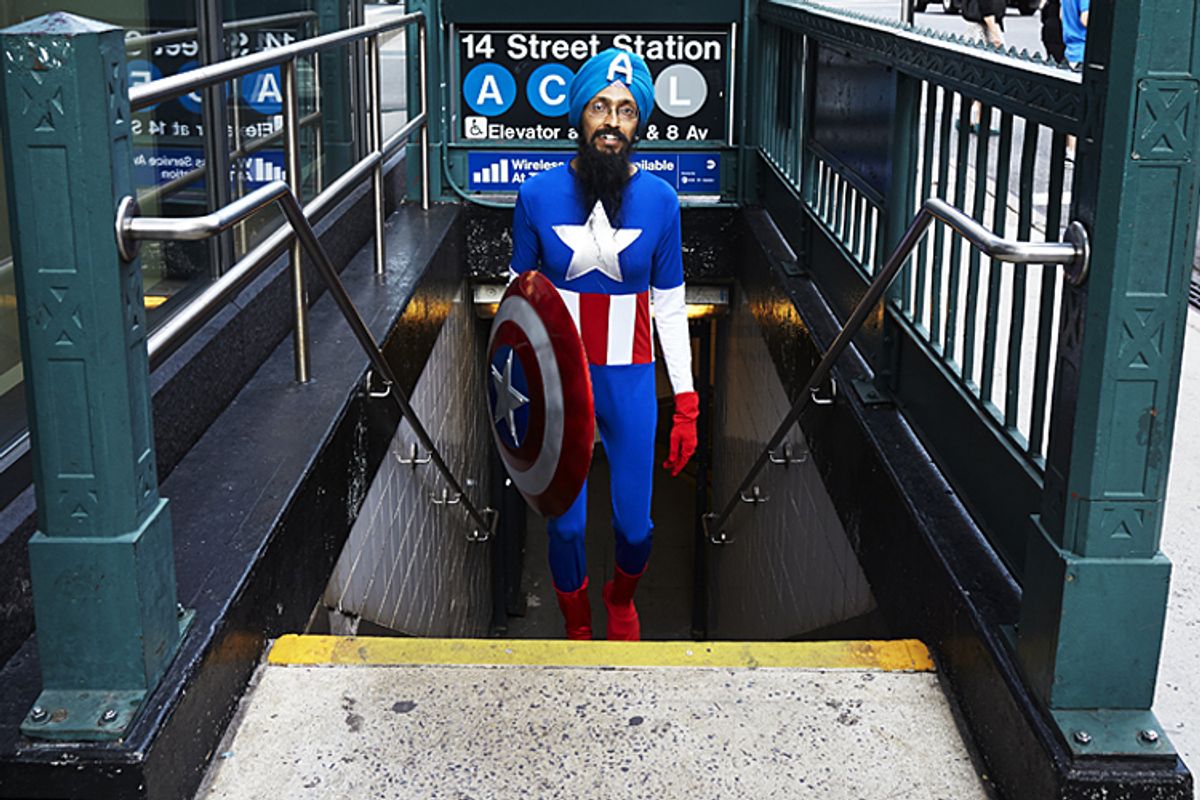 A photo of the author (Fiona Aboud)
--

On a warm sunny day in June, I stepped out as Captain America to mess with people's perceptions of turbans and beards. This was the first time in my life I had worn a costume. Not even Halloween had tricked me into wearing one. And I had no plans of donning it again. But life has its own plans, and I found myself out on the streets again thanks to the motley crew at “Totally Biased With W. Kamau Bell.” (Who, by the way, have been given the boot a week after airing the Sikh Captain America segment. I am ready to accept all the blame -- except for the stupidity of creating a new mutant FXX channel out of FX.)

Along the way I have learned a few life-altering lessons.

1) I did not know I could get hundreds of strangers to profess their love for me. Literally saying, "I love this man.” Who knew a skinny bespectacled Captain America in a turban with a long, sparsely populated DNA spiral of a beard could arouse such passion? To all of you I say, “Thank you, but I am taken."

2) You can grow balls any time in your life, and it has nothing to do with your body size or appearance. Circumstances and people can bring out the best in all of us. Tragedies and conflicts are the most potent opportunities for change. The hate crime wave after 9/11 provided the spark for me to start creating cartoons. The massacre of six worshipers at the Sikh Milwaukee temple last year gave me a reason to get out of my own way and agree to don the Captain America uniform. How we respond to these cracks in our life’s fabric can chart a whole new course.

3) If you stereotype people, then you have fallen victim of the malady itself. To all the people who have given me advice to stay away from white Republican places like Jersey, Florida, Texas and the South, let me say this. If I had stereotyped the world the way it may see me in my turban and beard, I would never have  walked out as Captain America. Stop projecting your insecurities. There are many good people all over America despite the political labels we wear. Intolerant asses reside all over the place. New York has its fair share. This Captain America is not a limited time offer in select locations. I was not transacting a deal. I was trying to make a connection with people. Thanks to the Army officer, Haitian American mother, woman who remembered her brief childhood encounter at a dance event with a turbaned boy in Detroit, woman from San Francisco who was inspired to dress herself and her boyfriend as Captain America, countless others who shared with me their memories, insecurities and moving encounters. Together we create super-heroic worlds.

4) Little ones, sorry to burst your bubble. I know you are very brilliant growing up with all the smart gadgets and know Santa Claus does not exist. But you should know that one of the most powerful tools today is coded in little 1's and 0's at a very basic level by super-smart people; some of you might call them geeks and nerds. Communication systems, weaponry, utility grids to just about everything you see and use are crafted by computer-controlled machines. Put simply: Superheroes with special powers come in all sizes.

5) This one is for brown people. Stop riding the coattails of the victimization of black people at the hands of white people. Racism can be both personal and/or institutional. Racism is also an equal-opportunity employer. Racists exist in all communities. You don't know the shit South Asian brown people sometimes say about black people. I do, since I have grown up in a South Asian household. Look at the bright side and see what we have in common. We are all susceptible to the perils of racism regardless of our backgrounds. So let that be the starting point and revelation that brings us together to solve our problems, rather than maligning entire groups of people. Honestly, I knew this before donning the Captain America uniform, but it sounds more heroic coming from my new alter-ego.

6) We are all bathing in ignorance. It is an integral part of life. Guess what, that is not a bad thing at all. It is the unknown that has driven humankind for eons to explore and discover our environs. Most Americans, actually many across the globe, have no clue who Sikhs are. And, believe me, there are many people and things I have no clue about either. Ignorance is not the problem. It is what we do with ignorance, our ensuing actions, that create real moments in life. Would I love to see everyone on this planet know who Sikhs are, not make us targets of hate, leave us alone and do a better job of targeting someone else? Hell no. I want a world where we can embrace each other despite our ignorance, in celebration of our differences.

7) Got to love kids for their darned no-holds-barred honesty. A massive gratitude to all the kids I have met on the streets on New York and beyond as myself and my Captain America alter-ego. You do what we adults keep locked up deep inside our bodies. The seeds of curiosity bubbling with loads of questions. Your innocent stares, pointed fingers and simple questions in my direction give me hope for the coming generations. Everyone, please don't be shy. Got questions about my looks, that thing on my head (known as the turban), what’s underneath the turban, my long, sexy, unshorn hair? My fellow denizens of planet Earth let yourself loose and allow me to answer your questions.

8) The power of stories, made-up worlds, fiction, imagination. Captain America was created in 1941 by the legendary Jack Kirby and Joe Simon as a patriotic superhero fighting the Axis powers. From its first incarnation in comics as a stand-alone hero to becoming incorporated as one of the Avengers, here is a character that has gripped our childhood and adult imagination. For all his creative genius I am not sure if Jack Kirby could have imagined someone like me donning the Captain America uniform, walking the streets of New York City, and the ensuing hullabaloo in the virtual and real world. That is the timeless power of imagination in images and words. Nothing like the orgy of the past, present, real, virtual rolling together in bed to create unexpected progeny. So please let your imagination loose.

9) I got an email from an author in response to my journey asking me if he could feature me in his upcoming compendium of "cosplay." I had no idea what the word meant. I had to Google this term to learn it is short for “costume play.” It refers to performance art with participants wearing costumes to represent a specific character or idea. Well, since then invitations have come from cosplayers across the U.S. They would love to stand right next to me in our full regalia. I still get cold feet and sweaty hands at the thought of stepping out in costume again. But I am ready to travel the four corners of our great land. And Hari Kondabolu, no I don't need bodyguards in New Jersey or anywhere else.

10) Most people don't give a damn that I am skinny. But after years of being labeled as one first by family and friends, occasionally by strangers, I internalized this as a malady. It changed how I looked at my own self in the mirror, how I dressed and how I carried myself for years. The big bullies do not just reside out there on the streets. In most cases they are loved ones sharing your personal space. It is easy to point at others' perceived or real follies. Do yourself and the world a big favor. Just focus on your own self. Let that be your meditation. Free yourself from what others think of you. Be yourself. Thank you, Fiona Aboud, for seeing me as worthy subject for your Sikhs in America photo essay. And thank you, New York, for allowing me to get over my own demons and insecurities.