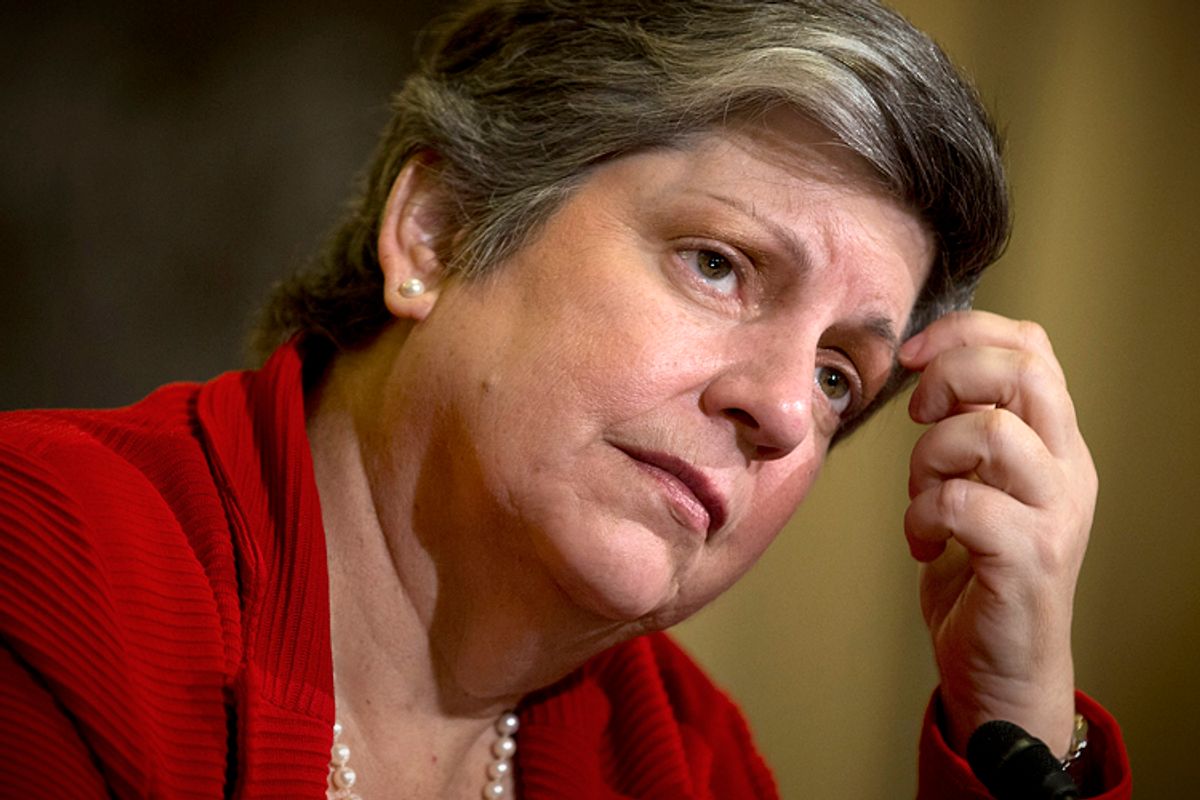 “She is the president, and she has the power to make change,” said Tim Thrush, a diagnostic stenographer and a vice president of the 21,000-member American Federation of State County and Municipal Employees Local 3299, which instigated the strike. “Ultimately it all comes back to her,” said Marco Rosales, a head steward in the 13,000-member United Auto Workers Local 2865, a student-worker union that is joining the strike.

At issue in today’s walkout is AFSCME’s allegation that U.C. management repeatedly violated state labor law in efforts to discourage the union’s members -- patient care technical and service workers employed in medical centers – from mounting an unprecedented work stoppage last May. In charges filed with the government, AFSCME charges that administrators violated the state Higher Education Employer-Employee Relations Act through a battery of fear tactics: repeated statements by top officials promising or implying potential punishment for strikes; threatening postings and letters; and interrogations by individual managers.

“It’s a little disturbing that, you know, as we are fighting for patient safety in the workplace, and just being advocates for what’s right for the patients and their families, that management would act so aggressively to try to shut us up,” said AFSCME’s Thrush.

Thrush is among the AFSCME members who say they were personally intimidated by management in the lead-up to last May’s strike, before Napolitano took over for then-president Mark Yudof. He told Salon that his manager gave him a list of supplies to fetch from a supply room, and then “proceeded to pursue me” there, “blocking the door, and very aggressively began to interrogate me.” Thrush added, “Her hands were on her hips and she was roughly maybe two feet from my face, and was telling me that I was acting illegally, that I shouldn’t be doing what I’m doing, that I would be hurting patients and she didn’t think it was right that I told the other employees what their legal rights were when she was interrogating them.” He called the tactic “outright bullying,” and said he found it “pretty nerve-wracking.”

The evidence presented by AFSCME also includes a message from U.C. labor relations director Peter Chester stating that “Service Unit employees at any location who engage in an unlawful sympathy strike face the possibility of disciplinary action,” and notices posted throughout the U.C. Davis Medical Center warning that “If an employee fails to report to work on one or more days between May 20 and 23, their absence will be considered unauthorized, they will not be paid, and they may be subject to disciplinary action.” (The union alleges the university espoused specious arguments that strikes would be illegal as a way to intimidate workers out of participating, and then withdrew its legal charges to that effect because they were bogus.)

Asked about the allegations, the strike and Napolitano’s role, the university referred Salon to a series of recent statements, one of which charged that “even the threat of an AFSCME strike has already affected patients,” including the rescheduling of elective surgeries, and said that it had “proposed several packages that showed significant movement in response to the union’s concerns and offered multi-year wage increases, affordable healthcare and quality pension benefits, which AFSCME rejected.” AFSCME countered that as in May, certain critical employees would voluntarily stay on the job under the union’s Patient Protection Task Force. In another statement, U.C. vice president Dwaine Duckett said that the university “asked AFSCME-represented employees if they planned to come to work, as is our a normal procedure, so we could adjust staffing as needed and ensure we could still care for patients during the strike.” AFSCME contends that the university violated several legal limitations on such conversations.

AFSCME and U.C. administrators have been in negotiations for over a year and a half. The university has blamed the lack of an agreement on AFSCME’s resistance to pension changes, while AFSCME has blamed the university’s rejection of proposals it says would improve patient safety. “We have made major concessions on many of our proposals, including wages and retirement benefits, in hopes that they would respond to our safety proposals,” said Thrush. “And they have not.” He cited AFSCME proposals regarding training and staffing. Noting fines assessed by government agencies, he charged, “There’s been patient deaths as a result of staffing issues and neglect of the safety” of patients.

Thrush offered some praise for Napolitano’s record to date, saying, “We find her to be much more open and receptive to working with the unions and our right to advocate with patients” and “we would hope that she would carry that new attitude on to her management group and get them to actually give us a workplace that’s safe and free of the intimidation tactics that they apply to quiet our voice.” The UAW’s Rosales was less optimistic, charging Napolitano has tried to “take the wind out of our sails” by publicly committing to invest funds that are “actually the amount of money that we would get in raises each year,” and thus “trying to co-opt the pressure that is being put on the university.” Rosales added, “I don’t think she’s done a good job of responding to these issues in earnest. It seems not very genuine.” The striking AFSCME and UAW locals are both helmed by leaders who ran on reform platforms and ousted incumbent union officials in bitter 2011 contests.

Napolitano isn’t the first Democratic Cabinet member-turned-university executive to stand at the center of labor strife. Five years into former Clinton Secretary of Health and Human Services Donna Shalala's tenure as president of the University of Miami, workers and students mounted a multi-week hunger strike to protest alleged attempts to quash a unionization drive by subcontracted janitors. Between Jack Lew’s stints in the Clinton and Obama cabinets, he served as chief operating officer at New York University, where he played a key role in the university’s campaign against its graduate student employee union.

Napolitano’s tenure at DHS has also spurred controversy on campus. At its first meeting of the year, the student senate debated a bill signaling “no confidence” in Napolitano; the bill’s author told the campus paper he introduced it because “she has deported over 2 million undocumented immigrants” and “comes from a background of surveillance and apprehension and security.” The bill was ultimately amended to say the Senate would express "no confidence" if Napolitano fails to meet a set of demands regarding the rights of undocumented students and campus protesters.