One of the gym teachers "heard that Lyndon Johnson had been hit, too, and was on the operating table" 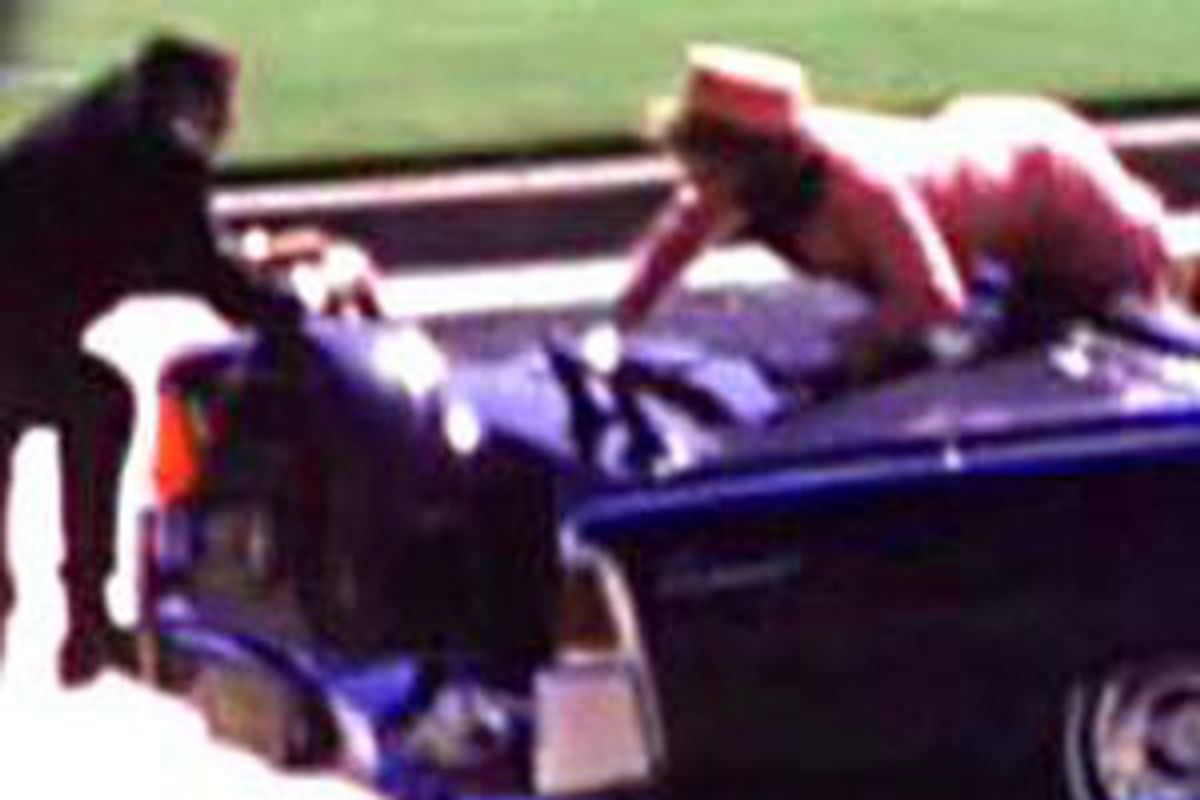 Friday afternoon in my upstate New York hometown, around 2 pm. I was a drummer in the junior high school band and after lunch in the cafeteria went to a rehearsal of the entire percussion section. A couple of bare light bulbs illuminated the stage; the rest of the auditorium was pitch black. Our teacher tapped his baton in time against the top of a music stand as we loudly banged away, reading the sheet music in front of us, the loud noise bouncing around the empty hall.

Suddenly, the teacher waved for us to stop. The principal was making an announcement on the public address system, his voice booming from the speaker hanging at the back of the auditorium. The sound of our drums continued to echo as out of the darkness we heard him say, “John F. Kennedy, 35th president of the United States…”
He paused for what seemed an eternity but was probably only a second or two, and in that moment, I thought the next thing he would say was that Kennedy had declared war, that he or the Russians had pushed the button. We were still living in constant nuclear anxiety, newscasts and nightmares filled with mushroom clouds and horror stories about what radiation could do to us. A mockup of a fallout shelter had been built on the courthouse lawn, we constantly were given civil defense brochures and sent into school hallways for duck-and-cover drills. Just a little more than a year before, we had seen Kennedy tell us about missiles in Cuba and warn that even if we won an atomic war with the Soviets, “the fruits of victory would be ashes in our mouths.”
Instead, the principal announced what in the moment seemed even more unimaginable: that Kennedy was dead. No other details. The echo from the loudspeaker moved through the empty auditorium and blended with the last reverberations from our drums. We stood there on the stage, shocked, not knowing what to say. A few weeks before, my Halloween costume for my last trick-or-treat had been my Sunday suit, tie and a Kennedy mask. My mother had kept scrapbooks on Jackie Kennedy and had let me stay up late to watch the inaugural parties in January 1961. These random thoughts flashed through my head but then here’s the way one adolescent nerd’s mind works. At breakfast, I had seen a tiny item in the morning paper: Kennedy would be giving a lunchtime speech at the Trade Mart in Dallas. Steak would be served as the main entrée and one would be chosen at random for the president. Good grief, I thought for one befuddled moment, the president got a poison steak!
The bell rang to change classes. And as we walked we heard that Kennedy had been shot. One of the gym teachers was standing in the hall; she said she’d heard that Lyndon Johnson had been hit, too, and was on the operating table. As with any breaking news, it would take a while for the stories to sort themselves out. I got to my next class – woodshop – but we weren’t there very long. Soon an announcement came to go home early, which offended the shop teacher, a perpetually cranky right-winger who thought we should finish the normal school day.
My friends and I walked home, taking the shortcut over the railroad tracks, walking down a slope and past the elementary and primary schools, both of them bursting with baby boomer kids just a little younger than us. For the rest of that Friday and the next three days, I would be glued to the television. My mother tried to get me to go with my father down to his store but I was adamant and inconsolable, only leaving the TV for meals and sleep. And church on Sunday. Coming home from the service, I clicked the set back on and moments later saw Jack Ruby gun down Lee Harvey Oswald in the basement of the Dallas police headquarters. Live.
It was all, as the poet Robert Lowell wrote at the time, “a moment of terror and passionate chaos.” Norman Mailer called it a “fissure in the national psyche.” More simply, seeing such things, especially at my age then, messes with your head, each of us in different ways. On the tenth anniversary, I was covering an assassination conference at Georgetown University for that late, lamented newspaper, The Washington Star. Most of the participants were my age, some a bit older, some more reasonable in their theories than others (outside, one of them would have his minions pick out likely “conspirators” as they walked by, push them against the wall of his white van and snap a Polaroid picture). No matter what, none would accept that Kennedy, now in death the charismatic hero of a fantasy America, could have been killed by a lone gunman. “If John Kennedy had been John Doe,” one of them insisted to me, “a coroner’s jury would have demanded considerably better proof than the Warren Commission got.”
By then, there had been other American assassinations: Bobby Kennedy, Martin Luther King, Jr., Malcolm X. But it was President Kennedy’s, fifty years ago this month, which began what The New Yorker’s Adam Gopnik describes as “the postmodern suspicion that the more we see, the less we know.” The Warren Commission’s 26-volume report and an estimated 40,000 books about Kennedy later, many still doubt.
Nevertheless, as with everyone old enough to have been alive and sentient then, what I saw and heard those four days in November remains irrefutable and indelible. Television made that possible. But while many will recall the sound of muffled drums as Kennedy’s horse-drawn funeral caisson was moved through the streets of Washington, I’ll remember Friday, 2 pm, and the echo of drums in a dark and empty school auditorium.