Dudes still upset that women can be raunchy 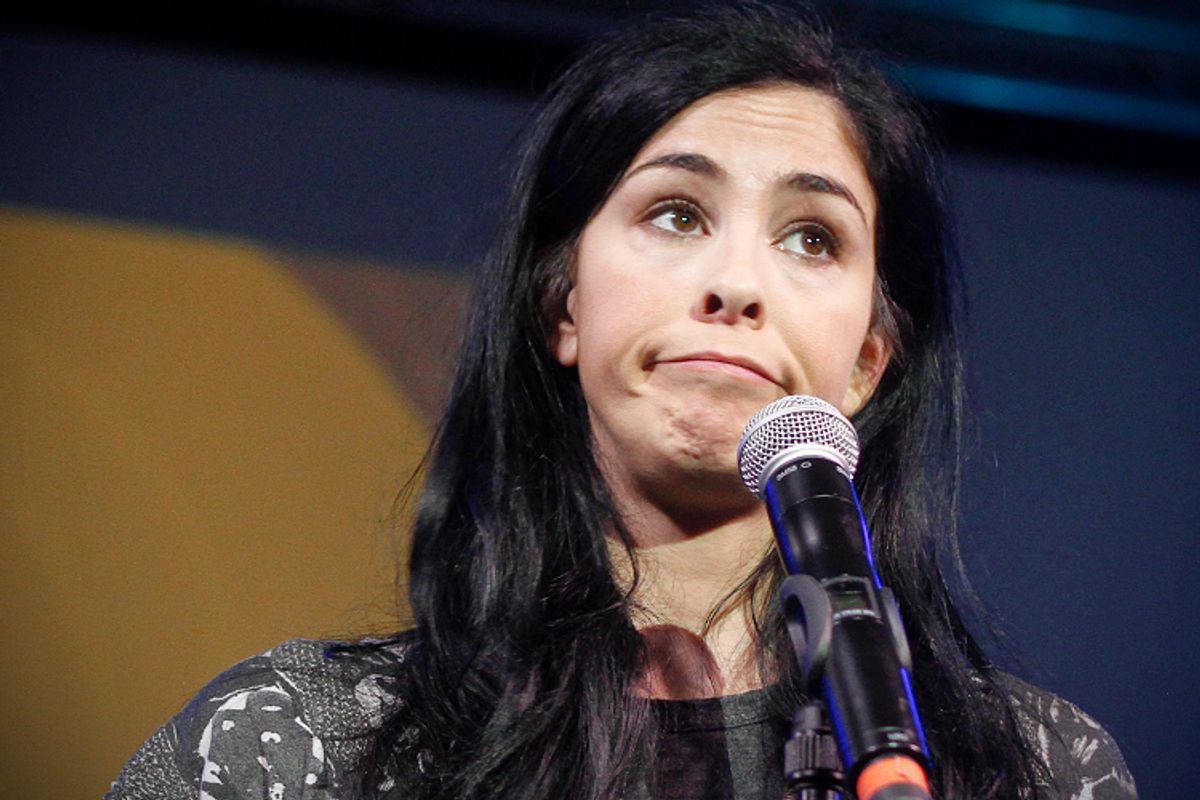 Variety critic Brian Lowry is worried about Sarah Silverman. In his Wednesday review of her new HBO special "We Are Miracles," he acknowledges her numerous "career-friendly gifts – from her looks to solid acting chops," but fears that the famously foul-mouthed comic is sabotaging herself. How? By daring to be "as dirty and distasteful as the boys." Twenty years into her career, and people are still asking one of the most successful women in comedy, "Why can't you be a nicer girl?"

As Beejoli Shah points out in Defamer, Lowry seems to have no problem with the famously down and dirty Louis C.K., whom he calls "moodily brilliant." Conversely, he's criticized Julia Louis Dreyfus' "Veep" for its "over-reliance on profanity." Sense a pattern here? But Lowry's complaint – his obvious shuddering disdain at a certain kind of female – is a common problem.

According the comedy experts at All-Knowing Men Central, women are biologically designed to fail at humor in one of two ways. More commonly, they do it in the manner Christopher Hitchens famously articulated several years ago: by being too tame, too dainty, by clinging to the universal truth that "Women, bless their tender hearts, would prefer that life be fair, and even sweet, rather than the sordid mess it actually is." If, however, they should happen to be not tender, not sweet, they run the opposite yet equally dangerous risk, of having the New York Times boggle over "Female Comedians, Breaking the Taste-Taboo Ceiling," or having a guy like Lowry explain, "This isn’t meant to suggest that female comics can’t work blue" before pretty much suggesting exactly that. Any way you slice it, what it all boils down to is a fact that noted comedy mastermind Adam Carolla described last year: "Dudes are funnier than chicks."

Lowry's latest addition to the big book of evidence of why women can't do comedy is inane and insulting on a variety of levels. For starters, it's bigoted, and bigoted in that particularly galling, "Why would you want to be as awful as disgusting, slobbering, weak men, you noble creature?" way. It aims to restrict women by telling them they're too good for the mucky – yet somehow more lucrative and applauded in society – world of men. It's like concern trolling that gay people shouldn't want to be as unfashionable as straights, or black people shouldn't want to be as boring as whites. Um, thanks?

Moreover, Lowry's discomfort perpetuates the absurd belief that being dirty or raunchy or profane or just plain funny are inherently masculine qualities. The social penalties women face for being dirty or raunchy or profane may be greater, but it doesn't make those attributes unfeminine. Let me let you in on something: We women bleed and secrete and change diapers and have sex and push slimy little humans out of our bodies. We also talk about it. This idea that we're dainty little flowers is BS, constructed largely to inhibit how we move through the world and make us feel bad about the visceral reality of our experience.

Most damningly of all, arguments like Lowry's mean that the rest of us have to now yawn and point and say, again, "White male privilege, much?" Lowry assumes, as so many others of his kind have done so often in the past, that because something isn't his thing it is wrong. Even as he admits his "subjective" view, he reveals his obvious discomfort with an act that involves "saying 'c—t' repeatedly" and "joking about rape." The job of a critic is to say whether the special is funny; it's not to assess whether Sarah Silverman is becoming too bro-like for his taste.

On Twitter Tuesday, several funny women took Lowry to task for his views. Sarah Thyre called him a "sexist dum dum" and Martha Plimpton threw in a "Pretty girls shouldn't swear' ugh." But the best response to Lowry, and the eternal argument against "dirty and distasteful" ladies in comedy came from actress Busy Phillips. She simply wrote, "F--- that."