In Pennsylvania, the right slashed public education funds. Their solution for schools? "In God We Trust" plaques 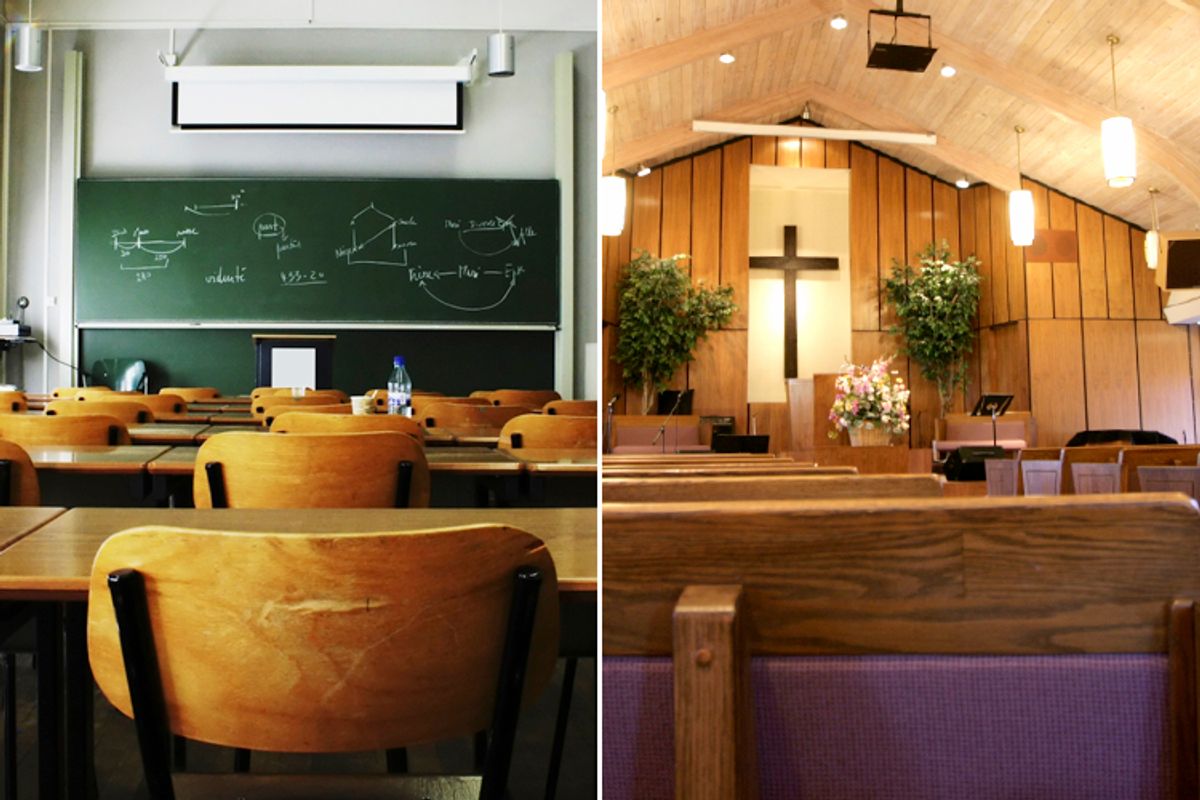 There’s no money for public schools in Pennsylvania, but, to paraphrase Bob Dylan, students are being told to accept it all bravely, cause God’s on their side.

Pennsylvania state Rep. Rick Saccone plans to introduce a bill this session that would require every public school building in the state to display a plaque that reads “In God We Trust.” If the badly underfunded schools can’t afford a plaque, the bill suggests, have the students draw it as part of an art project.

The measure is a tasteless and insulting slap in the face to educators across the state struggling to provide for the needs of children in the wake of massive cuts to education budgets. For the last three years schools have had to eliminate classes and extracurriculars, jam more students in crowded classrooms and operate with dangerous shortages of support staff like nurses and counselors. Maybe a state-imposed mandate to turn to God will help.

The ostensible purpose of the legislation “would be to promote patriotism through the display of the national motto and to educate children about an important but overlooked part of Pennsylvania’s heritage,” the lawmaker’s website proclaims, while Saccone expresses deep concern for citizens’ “lack of awareness” that the motto was first printed on coins during the Civil War era. As the bill points out, the director of the U.S. Mint at the time the language first appeared on two-cent pieces was James Pollack, who later became "The Great Christian Governor” of Pennsylvania.

When asked about how schools will pay for the plaques, he suggests that teachers have students themselves create the religious decree.

"They can display it any way they want. They can have one of their art classes make a drawing of it and put it up," he said. "They could have some of the PTOs or the PTAs get out there and be involved in it. There's a million ways to do this that won't cost them a penny."

The measure is almost surely unconstitutional. “The Supreme Court has been firm that public schools cannot promote or endorse religion,” says Christopher Lund, a law professor at Wayne State University who specializes in church and state issues, pointing out that the court in 1981 ruled in Stone v. Graham that the Ten Commandments could not be displayed in public schools.

“This display is nondenominational, but so were the Ten Commandments,” Lund says. “The bill’s sponsor says this is just a history lesson, but that was claimed in Stone v. Graham too. This is unconstitutional, and I think courts are very likely to so conclude.”

This is the same state Legislature that last year passed a resolution declaring 2012 the “Year of the Bible,” a measure also introduced by Saccone. An ensuing lawsuit was dismissed by a judge, who acknowledged that lawmakers have legislative immunity to pass nonbinding resolutions but criticized the measure as "proselytizing and exclusionary” and for pushing the envelope of the separation of church and state.

As an actual bill with real-world ramifications, the “God We Trust” legislation would be subject to judicial intervention, and if passed will undoubtedly cause the state to waste resources on pointless litigation.

Pennsylvania has myriad other problems piling up at the feet of its flaccid and ineffective state government, foremost among them the cash-starved school districts, but also including crumbling bridges, doomsday public transit scenarios, fracking gone wild, and anti-gay discrimination in employment and marriage. Instead of addressing issues that have real and meaningful impacts on people’s lives, the Legislature will instead focus its efforts in putting God back in schools and paying homage to the Great Christian Governor.

The state’s current governor, a right-wing extremist named Tom Corbett, recently launched his reelection bid despite poll numbers so far in the toilet that state Republicans were considering recruiting a candidate to run against him in the primary. A recent Franklin and Marshall College Poll found that 20 percent of Pennsylvania voters thought Corbett, whose first term has been dominated by cruel and heartless cuts to both education and social welfare programs, deserved reelection.

In the meantime his administration has been redefining Orwellian doublespeak by using shell games and accounting tricks to make the claim that he has made “record investments in state education,” an assertion that’s credible only to voters who lack even the most basic critical thinking skills.

“The basic education line item was increased, but the governor cut several other line items going to public schools, eliminated others entirely, and moved some of that money over to the basic education item,” explains Wythe Keever, assistant communications director for the Pennsylvania State Education Association. “If you look across the state, school districts are all describing cutbacks on academic programs, increasing class sizes and cutting teachers. If it looks like a funding cut, and it feels like a funding cut, it probably is a funding cut.”

The bottom line is Corbett slashed $1 billion from public education upon taking office and despite modest subsequent increases state schools are currently funded at a level about $700 million under what they received in 2010.

In Philadelphia, where the budget crisis was so severe that schools were barely able to open their doors on time this year, the district is still limping along with band-aid infusions of cash. The state, perhaps stung by bad publicity after a student died in September following an asthma attack at a school that had no full-time nurse, recently released $45 million of repurposed federal money it had been previously holding hostage in hope of crippling concessions from the teachers union.

The schools were then able to rehire 80 laid-off counselors, easing a desperate situation in which individual counselors had been responsible for as many as 3,000 students spread across multiple schools. Nurses still carry a load of as many as 1,500 students apiece.

Keever empathized that the PSEA, which represents 483 of the state’s 500 school districts, had not taken an official position on Saccone’s bill. But, he added, “I think all of our members would agree what’s needed is funding rather than divisive religious mottos ... Given the dramatic needs of students for resources and the elimination of 20,000 teaching positions in the last three years, it seems to be a distraction from more important issues.”

Perhaps the measure is an implicit acknowledgment that it would take an act of God to restore free and equitable education to Pennsylvania, given the dogmatic devotion to dismantling public schools emanating from the state capitol and governor’s mansion. Turn to God and pray, students, because you sure as hell can’t trust your elected officials.