You can't keep a secret for long

Research reveals that no matter how trustworthy you think you are, you'll eventually spill the beans 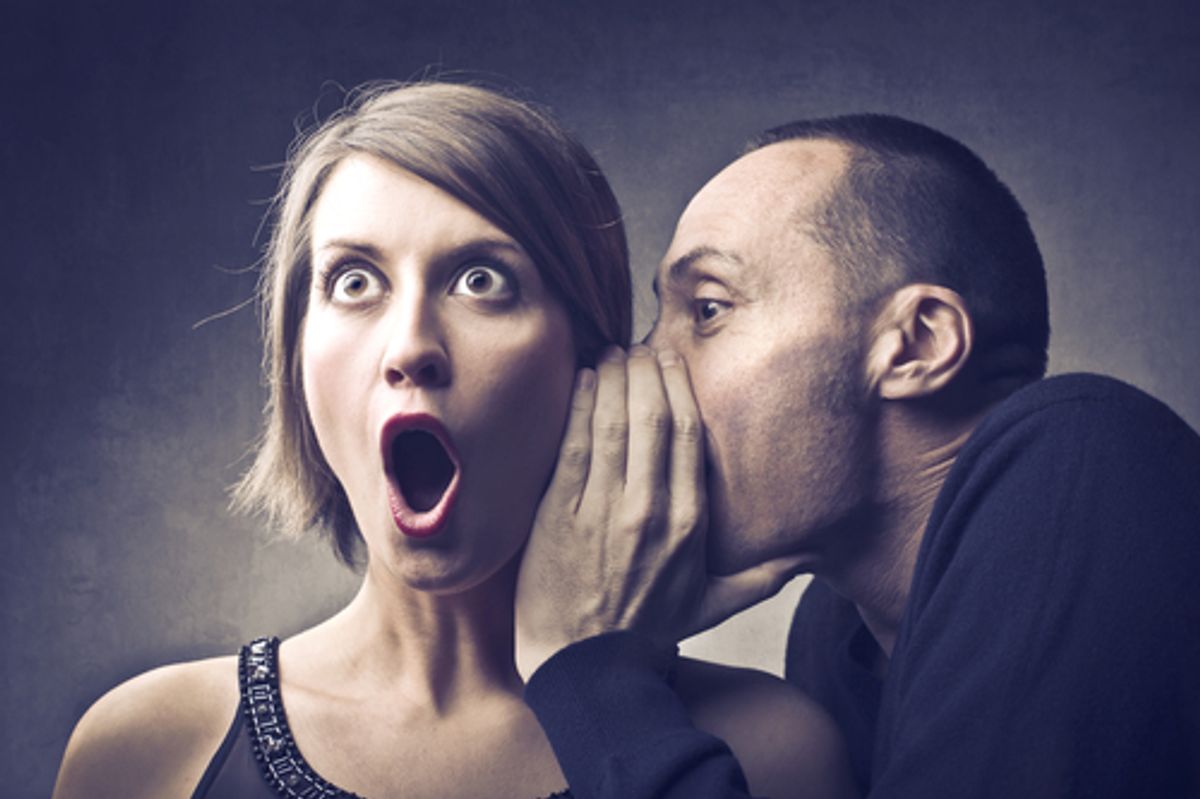 In Poor Richard’s Almanack Benjamin Franklin, under his own secret identity, asserts, “Three may keep a secret, if two of them are dead.” But even a secret known to only one isn’t likely to stay that way for long—and the means of revealing that secret are seemingly endless. There’s a whole tech sector designed to help people do the deed: dozens of websites, Reddit pages, and Tumblrs. Whisper, an app that lets you anonymously post secrets and converse with other revealers, has been downloaded by more than two million users; its audience ranges from teenagers to active military personnel. Whisper’s success fills the space left by PostSecret, which decided to shut down its application due to lewd submissions but continues as a franchise of books, conferences, and a wildly popular website all based off of the concept of people telling their secrets to strangers.

If the point of having secrets is to hide damaging information from others, why do we still feel compelled to share? For a society whose pop culture clearly shows us the chaos that can happen after a big reveal (let alone our politicians, whose secrets come out all too easily), we’re still really, really bad about keeping hush-hush. Here, as believed by social scientists, are some of the reasons why:

Having secrets makes us feel sad. The constant monitoring of our feelings and suppression of our thoughts is exhausting, writes Professor Tom Frijins in the International Journal of Behavioral Development.In Frijin’s longitudinal surveys of 278 adolescents, those who admitted to keeping a secret to themselves experienced a variety of psychological problems, including low self-control, depression, loneliness, and overall poor relationships with people—despite their connection to the secret. When checked in on six months later, those who chose to confide their secrets felt dramatically better, and those who still held on to their secrets felt worse. Overall, the young women in the survey had more secrets but were less likely to share them as the young men.

Sharing secrets makes you healthier. In “Revealing Personal Secrets” Professor Anita Kelly writes that people who tend to conceal personal information are more likely to experience physical problems like headaches, nausea, and back pain. Kelly’s thoughts are echoed in the work of James Pennebaker, who in 1989 videotaped and interviewed 33 Holocaust survivors about their previously unshared, traumatic memories. Each interviewee was monitored for their skin conductance level and heart rate. Fourteen months later self-reported health reports of the subjects were collected and the degree of disclosure in the interview positively correlated with better health.

They make us feel burdened, literally. Individuals who have secrets share the same judgments of people who are physically weighed down. In a study published in Social Psychology and Personality Science, subjects who were told to think of a personal secret judged hills to be steeper and distances to be longer than those who revealed their secrets before making the call. Author Michael Slepian says that when people are burdened, their perceptions are adaptively biased to fit their actions. As secrets are often metaphorically conceived as physical burdens, our minds go to a similar place when it comes to making decisions regarding physical effort.

Our brains won’t let us keep secrets for too long. Assistant professor of psychology and neuroscience Laura Smart claims our minds basically screw us over when we try too hard. When we attempt to suppress thoughts (forget about our own secrets) two mental processes come into play: an intentional operating process and an ironic monitoring process. The latter process requires little cognitive effort and, as Smart says, “It functions to search for exactly those unwanted thoughts that are under suppressions, thus ironically making the unwanted thoughts accessible and making it likely that they will return to conscious awareness.” If you’re stressed, it gets even worse: your brain is less likely to be able to suppress and drives you to think about it until the secret is revealed, most likely by accident. It becomes a fixed idea, Smart says: “A constant companion that becomes particularly unruly when audiences are encountered from whom the secret is to be kept.”

As for reasons you should be keeping secrets? The ability to keep the smaller secrets of others is considered to be a sign of good mental health, and having secrets, some think, allows one to forge a sense of identity apart from the monotony of society. Plus, no one likes an over-sharer.