With GOP obstruction defeated, attorney who helped Starbucks get away with firing union activists headed to bench 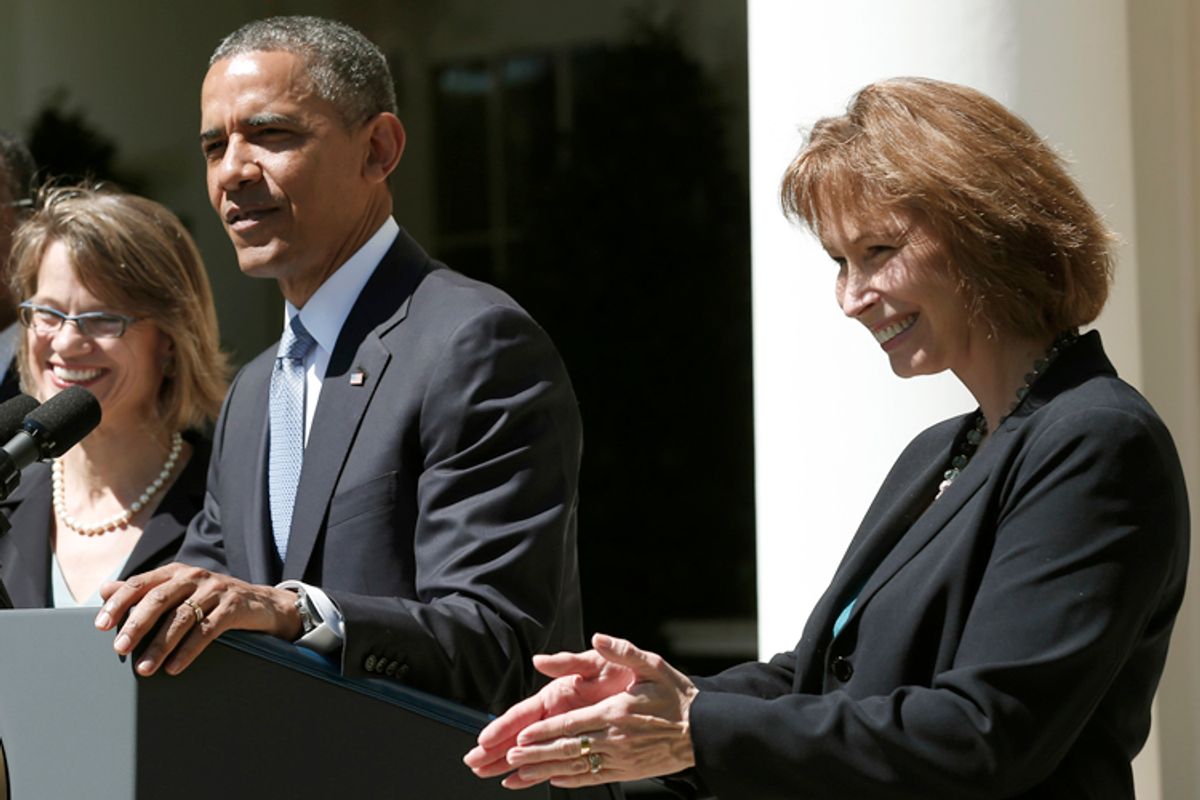 When Senate Democrats curbed filibusters in a historic Thursday vote, unions were among the major winners. The D.C. Circuit Court, where Republican obstruction has maintained a conservative majority, has repeatedly rejected modest pro-labor moves by the National Labor Relations Board. And restricting filibusters on nominations could pave the way for future senators to rein in filibusters on legislation, which have bedeviled unions’ labor law reform efforts every time that Democrats controlled both Congress and the presidency. Unions have thus been at the forefront of recent efforts to secure filibuster reforms.

So it’s ironic that one of the most acute and immediate beneficiaries of those efforts will be Patricia Ann Millett, a woman who helped Starbucks stymie unions. Millett is one of three D.C. Circuit nominees tapped by President Obama and blocked by Republicans; after invoking the so-called nuclear option, the Senate voted 55-43 Thursday to move forward on Millett.

“I find it troubling, because Ms. Millett and her firm Akin Gump went well beyond what I consider the bounds of decency and morality in the very aggressive anti-union campaign they really designed and helped Starbucks carry out,” Daniel Gross, a founding member of the Starbucks Workers Union, told Salon. “The campaign that Ms. Millett and her firm architected and really co-led, and continues to co-lead with Starbucks, involved all of the scorched earth tactics which are starting to come to light more and more.” The White House, the AFL-CIO and Starbucks did not provide comment on Millett's Starbucks work in response to Thursday inquiries. Akin Gump declined to comment.

After 11 years as an assistant to the solicitor general at the federal Department of Justice, Millett joined the top-flight firm Akin Gump, whose website describes its “Labor Relations Strategic Advice and Counseling” practice as including “union avoidance” and “the defense of unfair labor practice charges …” Millett’s clients there included the coffee giant Starbucks, which faced a union campaign by the Starbucks Workers Union, an affiliate of the Industrial Workers of the World (IWW, also known as the Wobblies).

Like other union campaigns against major corporations, the Wobblies’ effort at Starbucks was marked by allegations that once workers went public, the company illegally intimidated them and fired key leaders. “I can say without any hesitation or exaggeration, Starbucks’ anti-union campaign absolutely can go pound to pound with Wal-Mart,” charged Gross, who founded the labor group Brandworkers after being fired by Starbucks. After the National Labor Relations Board sided with the Wobblies on a battery of charges – including finding the company illegally fired Gross – Millett argued successfully for the 2nd Circuit Court of Appeals to override moves by the NLRB.

In a 2012 decision, Judge Jon Newman noted among the facts “essentially not disputed” that “Starbucks mounted an anti-union campaign aimed at tracking and restricting the growth of pro-union sentiment” and “employed a number of restrictive and illegal policies” in the process, and said it had been reasonable for the NLRB to conclude, in its decision siding with Gross, that there was “persuasive evidence of negative animus directed specifically toward Gross for those [union] activities.” Still, the judge concluded, “Gross’ documented performance deficiencies provide a sufficient and independent reason to fire him.” In the same decision, Judge Newman sided with Millett and Starbucks, and against the NLRB and the IWW, in concluding that it was acceptable for Starbucks to restrict employees to wearing only one union button, even though they were allowed to wear multiple buttons of other kinds. He also remanded the firing of another employee, Joe Agins Jr., back to the NLRB on the grounds that in siding with Agins, the Labor Board hadn’t sufficiently taken into account the public nature of his off-duty “outburst” in an argument with a manager at the store about the union.

While the judge wrote that Gross “was, in many respects, a poor employee,” Gross countered that he had been “literally an award-winning barista” until “somehow, when I went public with the union, I lost all my barista skills as far as they were concerned." He charged that “Starbucks, with Akin Gump, succeeded in really undermining my own right of free association, and helped Starbucks send a chilling message to other workers.” While acknowledging that “both sides are entitled to representation” in court, Gross said that Millett and her colleagues went far beyond that: “they help companies outside the courtroom, on the shop floor and elsewhere, architect very deceptive, cynical, and frankly powerful anti-union campaigns against workers.” Fellow fired activist Agins authored an online petition urging Obama to withdraw Millett’s nomination on the grounds that she “argued in the Second Circuit to reverse the three judicial victories that I have won against the anti-union strategy that her law firm devised for Starbucks,” and “would not be able to rule impartially on questions of worker freedom of association.”

President Obama has tapped appointees with stints on both sides of labor-management disputes. To the chagrin of Republicans, he’s chosen former union attorneys among his appointees to the NLRB, and a new labor secretary who chaired the board of a labor group. But his Cabinet members’ résumés also include alleged union-busting companies Hyatt, New York University and Wal-Mart.