The Texas senator, born in Canada, comes to NYC to raise money. Will Donald Trump demand his papers? 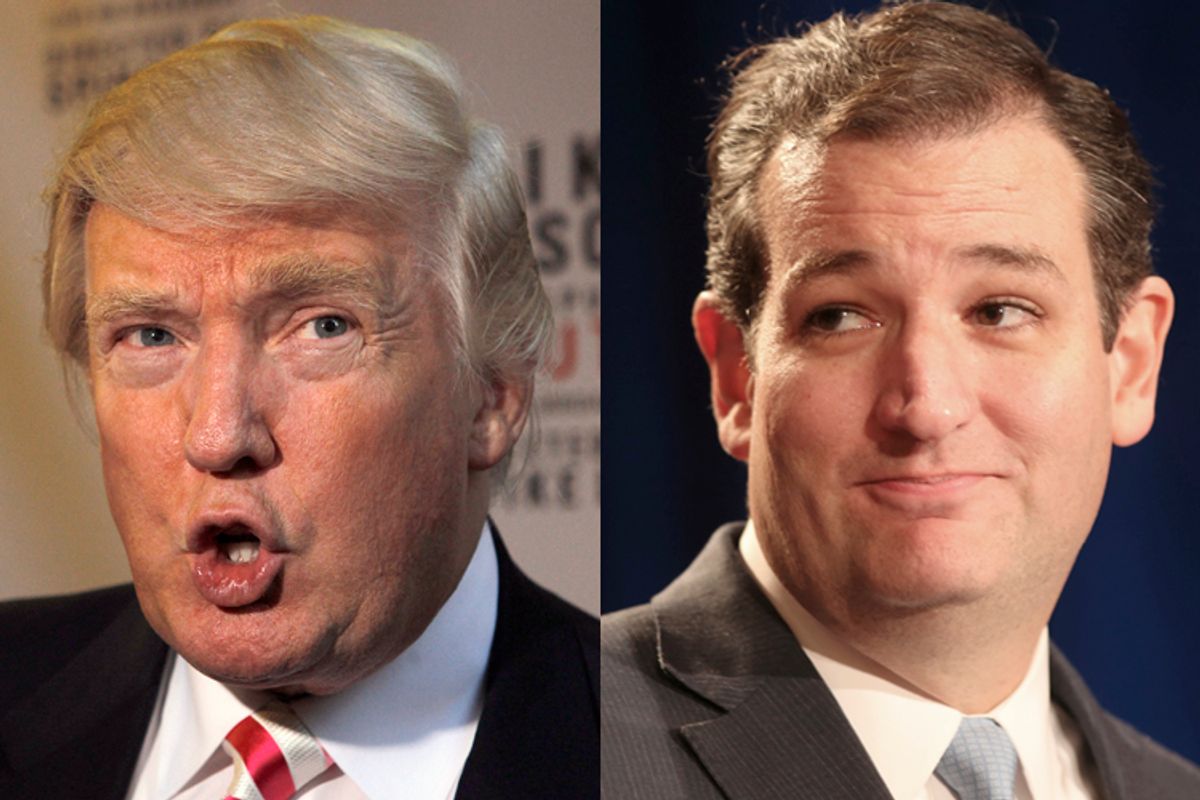 Fresh from the Senate filibuster vote in which he played a starring role for the losing team, Texas Sen. Ted Cruz is in New York Friday to raise money from blue state infidels. But he’s also making time to see GOP carnival barker Donald Trump.

“Mr. Trump is a friend and the senator had some downtime in NYC,” a Cruz spokeswoman told Politico.

Trump Tower might just be a normal stop on the road to the 2016 GOP presidential nomination, as it was in 2012. Eventual nominee Mitt Romney humiliated himself courting Trump despite his ugly birther-baiting of President Obama. Well, maybe not despite it, maybe because of it. But it did lead to some not-so-magic moments for the GOP nominee, like the time he was photographed with the Trump plane logo behind him, looking like he played for the Trump team and not the other way around.

But Cruz may have an additional agenda besides just kissing Trump’s ring and eying his wallet. In August, Trump told ABC’s “This Week” that the Canadian-born senator was “perhaps not” eligible to be president.

Ironically, even though “birthers” make up a large chunk of the Tea Party, they’ve had no problem when it comes to Cruz, who was actually not born in this country (though many experts believe he is still eligible to be president). You’ve got to hand it to Trump – maybe his crazy is a consistent kind of crazy, and he’s going to give Cruz the same trouble he gave Obama?

Nah. Apart from his dainty “perhaps not” answer to ABC (and Trump still appearing on the Sunday shows is testament to their enduring mediocrity), Trump has had many chances to question Cruz’s eligibility and he hasn’t taken them. They were together in August at the Iowa Family Leader summit, and again at an American Spectator dinner in October. Staffers say they’ve spoken by phone a few times in there, mostly about the hugely unpopular government shutdown that Cruz proudly spearheaded.

So I don’t expect Trump to become the pest he was to Obama when it comes to vetting Cruz’s eligibility for the White House. Cruz is too crucial to the right-wing movement that through today seeks to make Obama a footnote, not a president. Obama was talking about Cruz, of course, when he complained Thursday that “Senate Republicans filibustered a president's nominee for the secretary of defense -- who used to be a former Republican senator.” That was Chuck Hagel, and Tailgunner Ted not only tried to filibuster him but accused him of taking money from our enemies.

Cruz’s below-the-belt style of politics is closer to Trump’s than any of the other likely 2016 contenders. I’d count on Trump to make common cause with the nastiest Republican in Washington, not fight him.