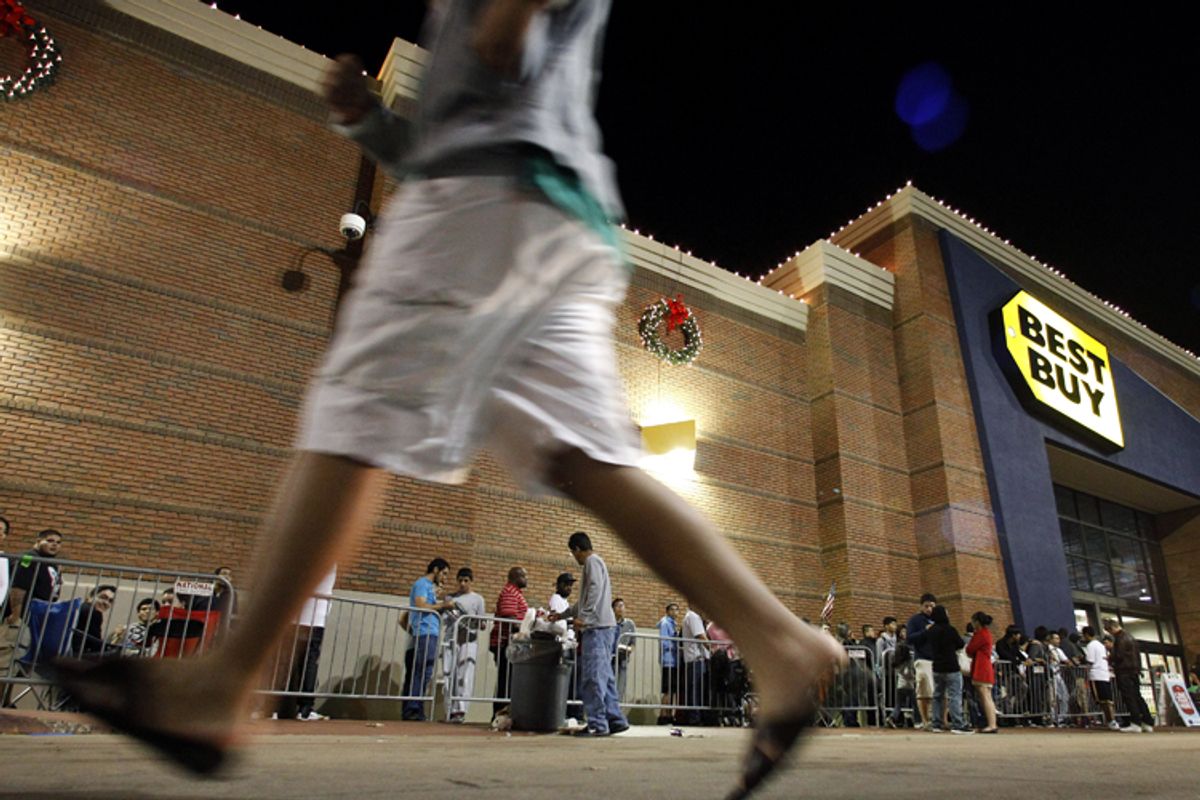 Forget about the way that holiday shopping hours have already stomped all over Thanksgiving Day. With a full week to go before Black Friday officially starts, consumers are already lining up for deals.

To be precise, holiday shoppers already began queuing days ago. Before next weekend is over, an estimated 140 million Americans will have gone holiday shopping – including 33 million Thanksgiving Day shoppers. And as Fox8 in Cleveland reports, there's been a line forming at a local Best Buy since Monday, where the die-hard have been pitching tents and taking shifts to hold their spots. As one Black Friday veteran, Tony Avitar, explained to Fox, "I wanted to stop three or four years ago, and my kids make me do it because they like coming down. We usually have Thanksgiving dinner brought to the tent, so we’ll have a full spread in the tent, and it’s kind of my time with them."

Avitar's reasoning for doing it is a common excuse. He says, "Originally I started because you know I have five kids and when you're on a limited income, or even not a limited income, you want to be able to get them nice presents instead of getting them like some crappy toy." But surely most people, even those on very tight budgets, understand that there are ways of celebrating the season and providing for one's family that don't involve living like a homeless person for days on end. You could shop online – there's no shortage of huge sales and plenty of sites throw in free shipping. You could look in thrift stores -- they're cool! -- and the effort of pawing through secondhand merchandise is still considerably less time-consuming and less likely to end in being stampeded than devoting days on end to hanging out in front of a Best Buy. Or you could simply buy more modest, not necessarily "crappy" gifts.

Despite the undeniable frenzy of consumerism that Black Friday heralds – and heralds earlier and earlier every year – there are plenty of shoppers who are more than happy to sit it out. In a Safe Home Products survey last year, an impressive 89 percent of consumers said they prefer shopping online, and 96 percent cited its superior convenience.

But it seems likelier for the many, many Avitars of the country, the huddled masses yearning to get their hands on a cut-rate flat-screen TV, the greater motivation isn't in the prize but in the ritual itself. Two years ago, professors from South Carolina's Winthrop University who studied the phenomenon observed that "For the person who's been doing this for decades, this is as much of their Thanksgiving tradition as having turkey. That's why they're going to endure lines and probably even thrive in the lines." And, they note, there's the adrenaline element: "At certain levels, consumers enjoy arousal and challenges during the shopping process. They enjoy something that's harder to get, and it makes them feel playful and excited."

For those of us who'd rather eat glass than be inside a store any time in the weeks before Christmas, the Black Friday experience is hard to understand. But there's a buzz from being in the crowd, from holding the merchandise in your own hands, that turns spending money into a bona fide event. It's a bonding experience. As a shopper told WKYC News this week, "We'll hang out, share food and share stories and just try to make a good time of it." In its own weird way, it's what Thanksgiving was always all about anyway.