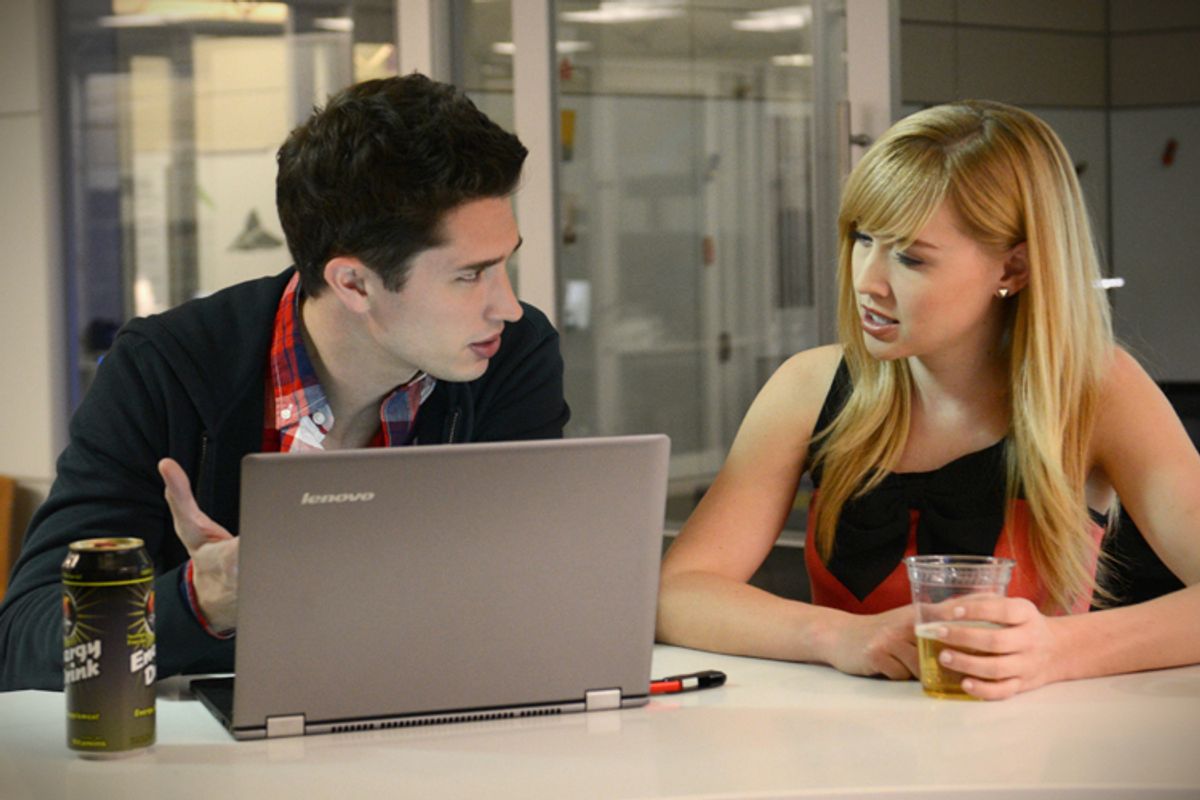 "Dude sent a dick-pic and didn't use Snapchat. He's an idiot."

If the ergo here isn't super-obvious to you, you might not be the target audience for Amazon's new sitcom "Betas." The show revolves around a small -- say it with me! -- dysfunctional team of programmers trying to set Silicon Valley ablaze with their new social media app. The pilot first aired in the spring as part of a test marketing push for Amazon's original programming. Two additional episodes were made available on the site today. But then, if you're not super-comfortable watching situational comedy on your computer rather than your TV -- I can't get my mirroring feature to work, sue me -- again, you may not be the target audience for this show.

"Betas" centers on Joe Dinicol and Karan Soni as best friends and millennial eggheads Trey and Nash. The dynamic is familiar: Trey is the face of their adventures, a good-looking, fast-talking optimist-slash-opportunist who quotes Sun Tsu and believes in big risks and even bigger rewards. Nash is the nebbishy, socially awkward nerd (ultra-nerd in this cosmos) who prefers to keep his head down while both frowning upon and envying his partner's brashness. At some point before we pick up the story, the former convinced the latter to drop out of Stanford University and into relative poverty so that they could pursue their tech-geek dreams together. One could say it's Ferris and Cameron all over again, but that would be only one flavored bouillon cube in the very chunky soup of "Betas" DNA. There are hints of everything from "Head of the Class" to Happy Madison's "Parker Lewis Can't Lose" to Douglas Coupland's "Jpod." (Hell, Dinicol, himself, looks and feels like the three-way love child of Justin Long, Zach Braff and Jay Baruchel.)

"Betas" dialogue can be a little unrelenting in its hipness -- though none of the show's characters would stoop to using that crusty term to describe their own on-trend geek-speak. Everyone is "bro," "dude," "son" or "chica," comic book and video game references abound, and digital age brand names fall trippingly from the tongue with surprising frequency. (I knew Uber, but I had to pause the second episode to Google Gustin.) It's like "The Big Bang Theory" with a decidedly more capitalist bent -- and also on speed. Even an old media callback, "The Shawshank Redemption," is couched in a new media context, i.e., the classic film's IMDB status.

Despite its cutting-edge cachet, nothing about "Betas" feels terribly new. Parker Lewis still can't lose. Trey and Nash will be at each other's throats, but in no permanently damaging way. After the team joins an accelerator program for promising start-ups, it only takes three episodes for Trey to hook up with his supervisor, the pretty but uptight Lisa (Margo Harshman). Expect them to go all Ross and Rachel for as long as that story line can sustain itself. Even the raunch factor, embodied by Jon Daly as Hobbes, the resident dirty old man -- he's 35 -- feels well-worn by films like "Grandma's Boy" and "Knocked Up."

In this case, familiarity doesn't particularly breed contempt. "Betas" is slick and well constructed with some funny moments and watchable people. Whereas the character Mikki comes across like an android version of the Urban Dictionary, all blasé snark and little actual wit, her affable boy-toy Mitchell (Charlie Saxton) resembles a human being -- albeit an eagerly over his head one. Also, it appears, after an odd date set by his overbearing parents in the third episode, that Nash might actually be gay. I'm not saying this twist would be anything too remarkable. (Come to think of it,  Saxton's character wrestled with same on HBO's "Hung." And, depending on your perspective, "Big Bang's" Raj may be inching toward a similar revelation.) It's just that if Nash is conflicted about his sexuality, it would give him and his buddies something to talk about besides apps.