With many predominantly poor Web users relying solely on smartphones, the digital divide has never been greater 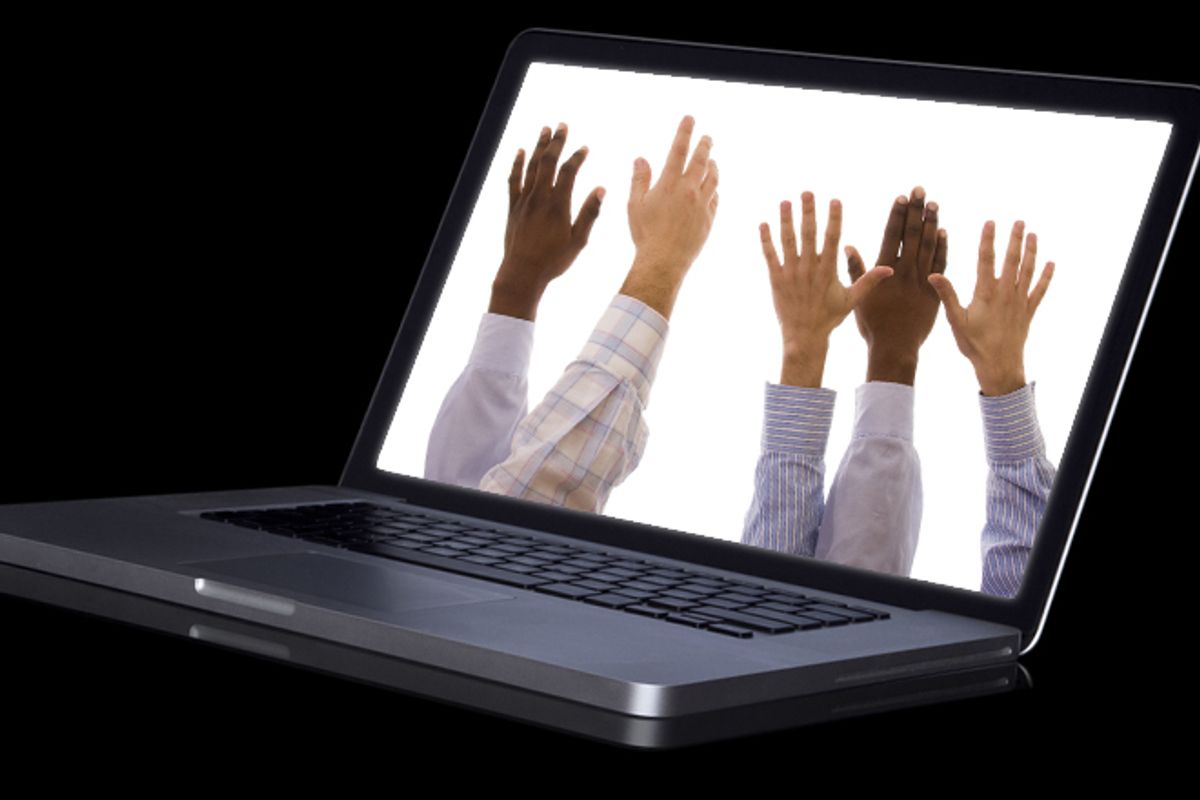 (SCOTTCHAN and Helder Almeida via Shutterstock)
--

In 2013, more Americans than ever are online. In the eyes of activist Larry Ortega, this is unequivocally a positive development. But to call the digital divide closed, even between groups of people who possess the ability to access the Internet, is something he profoundly disagrees with.

The problem, Ortega argues, is that large swaths of the population, groups that are predominantly poor and non-white, are largely relying solely on smartphones for Internet access. It’s created a two-tiered system where the rich have access to expensive, high-speed broadband Internet at home and everyone else is relegated to slower connections on mobile devices that seriously limit users' ability to contribute to the digital conversation.

Ortega views this emerging digital divide as one between “digital consumers” on one hand and “digital contributors” on the other, illustrating the gap with an example from near his home in Southern California. He tells the story of a diverse coalition of groups organizing in favor of ordinances in the cities of El Monte and Pomona that would allow the local governments to use eminent domain to seize underwater mortgages from the banks that hold them. There’s a major grassroots mobilization of local activists to push the ordinances through in the hopes that freeing people in these communities trapped under the crushing weight of the mortgages could jumpstart the region’s moribund economy.

This activity has occurred through mobile-friendly networks like Facebook and Twitter; however, the original spark that kicked it off—the composition of op-eds in favor of the motion, the creation of YouTube videos explaining exactly what eminent domain is, and more—could never have happened exclusively on mobile devices.

Ortega charges the real promise of the Internet is allowing people to deeply engage with the world and communities around them. In many cases, due to technological limitations, that’s not happening.

“The real test is seeing if people’s lives are improving because of Internet access,” says Ortega. ‟Kids can go on their phones and watch music videos on YouTube all day, but is that improving their life outcomes in a meaningful way? No, it’s not. They’re limited to being consumers and not contributors.”

While smartphones are growing increasingly versatile with each passing year, the limitations of small keyboard and screen sizes increases the difficulty of many tasks that are relatively simple on a full-size computer.

As the Media Action Grassroots Network put it,

‟A cell phone or mobile device is not a substitute for a laptop or desktop computer. Many everyday Internet needs such as applying for a job, conducting research, registering for classes, or accessing government or social services are difficult or impossible on a mobile device.”

In a recent study of cellphone use, the Pew Internet & American Life Project found that just over one-third of Internet of cellphone owners users reported to mostly going online using their mobile devices. This group, which Pew labeled "cell mostly Internet users" consists primarily of young adults, non-whites, the less educated and the less affluent.

Rates of ‟cell mostly” users were about twice as high for blacks and Hispanics as they were for whites. The figures broke down on roughly equal lines for households earning less than $30,000 per year versus households with an annual income of over $75,000.

For rich Americans, smartphones are a luxury. For the poor, they’re increasingly a necessity.

It isn’t only people with low socioeconomic status who are forced to rely on wireless devices for Internet connections. For those living in remote, rural areas, wired Internet access isn’t an option no matter how much they’re willing to pay. The FCC reports that 19 million Americans are living in communities beyond the reachof cable companies or other broadband providers.

Pew Internet Center Director Lee Rainie noted that, while the percentage of respondents who primarily use smartphones to get online is fairly high, the number who reported mobile devices as their only means of Internet access is actually very low. ‟Cell mostly” users aren’t entirely bereft of broadband Internet access—they can often get it at schools, libraries, or community centers—but they more than likely don’t have computers or broadband access at home.

A Wall Street Journal report from earlier this year detailed how, in many communities around the country, students are turning totheir local McDonald’s for the after-school Internet access required to complete their homework assignments.

According to Stephanie Chen of social justice public policy advocacy organization the Greenlining Institute, this sort of irregular, infrequent access is no substitute for a home broadband connection hooked up to a laptop or desktop computer.

‟Libraries are facing staffing cuts and service reductions, so the amount of time people can spend using computers there is decreasing,” Chen warned. ‟Now, people may only have something like 45 minutes to write a resume and cover letter and then send it out if they need the computer to apply for a job, where before they might have had as long as they needed”

Much of what lies behind this new digital divide comes down to question of cost. Many households can’t afford a home computer or the monthly payments that accompany broadband service. Others have problems with credit card deposit or credit check often required to set up Internet service.

“If you have a modest amount of resource and want connectivity, people tell us that a smartphone is like a Swiss Army knife,” says Rainie, who explained that mobile devices are often the best bang for your buck in terms of being able to achieve a whole lot of different tasks on a relatively limited budget.

Some have advocated for advocated for government intervention on the issue. In 2010, the Obama administration announced the National Broadband Plan, which had the ambitious goal of wiring virtually every American household with high-speed Internet access. The full implementation of that plan has yet to occur.

Lifeline is a program where landline phones (and, more recently, mobile phones) are given to low-income Americans at a highly discounted rate. At the moment, it may not be the most politically palatable model for using government intervention to bridge the new digital divide, because widespread abuse of the program has led many conservatives to rail against it as an example of government waste.

However, Ortega counters that, in many cases, it’s more about the perception of the value of a home Internet-accessible computer than the simple mathematical calculation of whether a family can afford it.

Ortega recalls an instance from one of the digital literacy classes his organization has put on.

“We had a kid in one of our classes and he was a superstar. He could use the Internet every which way,” Ortega said. ‟But, when he went home, there was no way for him to use his new skills because his family didn’t have a computer. They simply didn’t see the value in it. We hosted a raffle where the prize was an older, refurbished computer. The kid won the raffle and took his computer home. Within a week, his parents tossed the computer he won by the wayside and bought him a brand new machine because they finally saw, first hand, the value in it.”

‟It’s as much about educating people in communities without a high rate of Internet penetration about the value of high-speed connections,” he said.