We got high, thousands in Mexico died 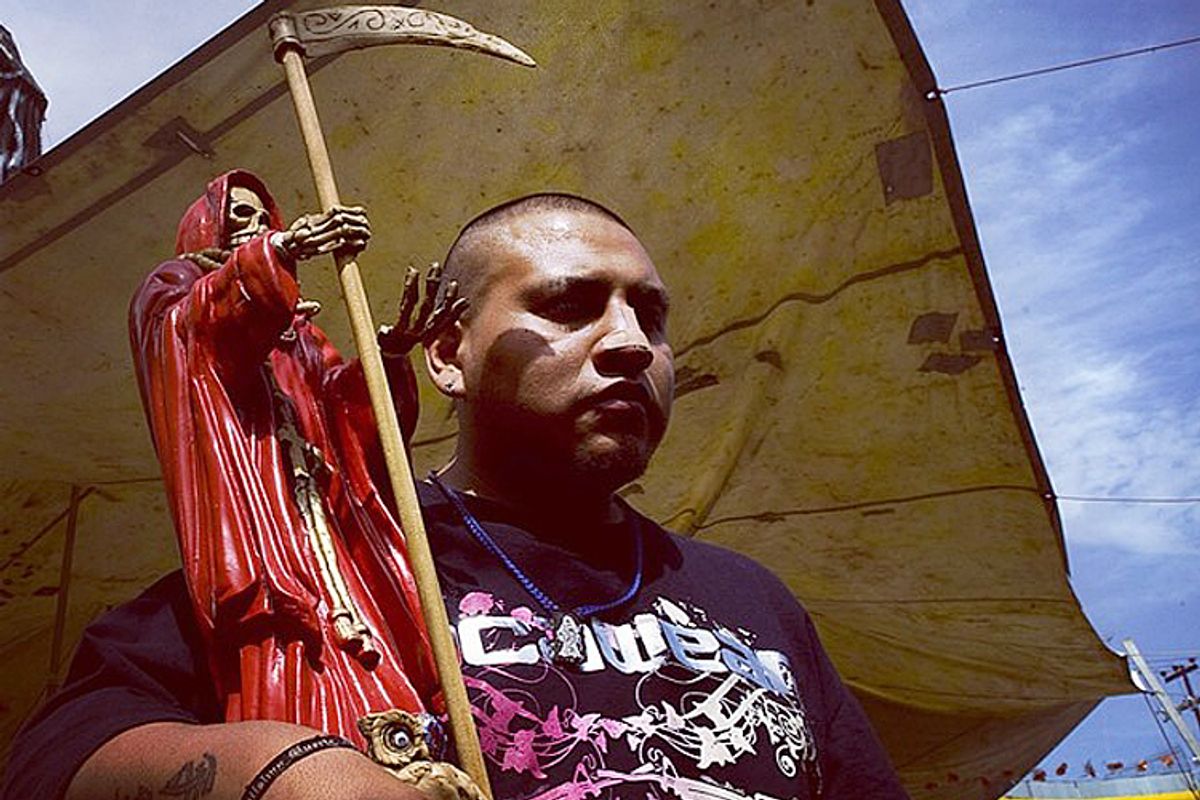 Just outside the city of Culiacán, near the northwestern coast of Mexico, sits an impressive new development, a boomtown where construction never stops. It’s a monument to the neoliberal reshaping of our southern neighbor’s economy, and to the social and cultural interpenetration between America and Mexico in a paradoxical era of supposed closed borders and supposed free trade. This burgeoning new city bristles with all the incoherent architectural detail of an upscale suburb outside Houston or Phoenix – Tudor meets Gothic meets Mission meets ranch – but is eerily, deadly quiet. That’s because none of its residents are actually alive.

This is the Culiacán cemetery, crowded with hundreds of young men who got rich and died young in Mexico’s drug wars, to be interred behind bulletproof glass in McMansion-style crypts, alongside their customized Silverado pickups, their kitsch-heroic color portraits, their stuffed animals and religious icons, their AK-47s. Every army honors its fallen in its own way, and as we see in Shaul Schwarz’s arresting documentary “Narco Cultura,” this place is hallowed ground for warriors of the Sinaloa Cartel, which is probably the dominant criminal organization in Mexico, North America and the world. If you’ve purchased marijuana or cocaine or crystal meth or almost any other illegal drug during the past decade or so, then you helped pay for this place, and helped put people in it too.

I know that’s harsh. I’m not actually saying that ordinary Americans’ desire to get high is the fundamental problem behind the nihilistic cycle of Mexico’s drug wars, only that this is one of those situations where there’s more than enough blame to go around. America’s demented drug policy and its voracious appetite for drugs have fueled the violence, as has the unresolved social and political crisis in Mexico, a nation corrupted and distorted from top to bottom by drug money. One could argue that the real villain is neither Mexican nor American, but a global free-trade ideology that pretends to be neutral and apolitical. Schwarz’s film is about how the drug trade and the drug war have transformed Mexican culture on both sides of the border, but what we see in that Culiacán graveyard is that the values of the drug war, and indeed the values of organized crime more generally, are just the values of capitalism pushed to a grotesque extreme.

More than 60,000 people have been killed in Mexico since 2006, when then-President Felipe Calderón, a pro-American free-marketeer with a Harvard MBA, launched a military-style campaign against the nation’s drug cartels, which were already locked in internecine warfare against each other. (He also allowed the DEA to cross the border and operate openly within Mexico for the first time.) Those are just the government’s murder statistics; many observers believe the real harvest of death is more like 100,000. As a melancholy crime-scene investigator in Ciudad Juárez named Richi Soto tells Schwarz, his notorious border city – a major hub for narcotics transport into the United States – had more than 3,000 reported murders in 2010 alone. Across the river in El Paso, Texas, there were five murders that year. (While the murder rate in Juárez has decreased since then, it remains extremely high by world standards, and the overall rate of drug-related crime in Mexico has not fallen much, if at all.)

The history of violence that produced that shocking disparity, and that horrifying and ludicrous city of the dead in Culiacán, is full of what-ifs, but here’s the biggest one: What if America had not succumbed to the anti-drug hysteria of the Reagan years, and had pursued a drug policy that was sane and rational rather than contradictory and self-destructive? Mexico’s troubled love-hate relationship with the United States has long been a matter of unacknowledged codependence, in which they send us people or commodities (often people as commodities) that our economy relies upon but we’d rather not talk about: Farmworkers and chicken-gutters; maids, nannies and gardeners (papers not required); cheap fruit in the middle of winter; lots and lots of drugs.

Successive Democratic and Republican administrations have poured countless billions into prisons and police departments in a fruitless campaign to stop the drug trade, but America’s demand for drugs never slackened, and the Mexican cartels only grew in power and paramilitary might. There are any number of good arguments for legalizing marijuana and decriminalizing almost all other forms of street drugs, and I suspect we’ll get there eventually, much more slowly than we should have. You can call it compassion or shame or sheer self-interest, but the same war that has killed thousands in Mexico (including many innocent bystanders) has also fueled the growth of the prison-industrial complex in the United States, and driven the widespread incarceration of brown and black people. However many border fences we build and however much we demonize each other, our two nations have a shared destiny, and any cancer that poisons one will also poison the other.

In “Narco Cultura,” we hear Edgar Quintero, a Mexican-American singer of narcocorridos -- a hugely popular genre of Mexican pop song in praise of the drug lords, and sometimes commissioned by them – sum it all up: “As long as the gringos keep smoking it, we’ll keep making it.” That song is about crystal meth, which Quintero doesn’t personally make, use or sell. (Did you know that you can find meth-smoking instruction on the Internet? I did not know that.) He’s a cheerful, upbeat guy who smokes a little weed from time to time but avoids the harder stuff, a loving father who hopes to build a future for his family on the narcocorrido craze. Quintero has spent his entire life in L.A. and is more comfortable speaking English than Spanish; as he complains to a friend, there are Mexican idioms he doesn’t quite get. His band is called Buknas de Culiacán, in tribute to a place he’d never been. There’s really no other way to say it: He’s a fanboy, both of established narcocorrido stars like El Komander and drug kingpins like Sinaloa Cartel head Joaquín “El Chapo” Guzmán, currently ranked by Forbes as the 67th most important person in the world. (He’s just below House Speaker John Boehner and just above New York Times editor Jill Abramson.)

Although Schwarz stirs in a few talking-head interviews and some snippets of background information, most of “Narco Cultura” is a vérité-style account that moves back and forth between Richi Soto, collecting dozens upon dozens of dead bodies in Juárez, and Quintero playing rowdy gigs in Latino nightclubs, posing with fake guns for publicity photos, and acting in straight-to-video action flicks. The two men never meet, but the contrast between them is obvious, and instructive. Soto is a reticent, haunted-looking fellow, who rarely goes anywhere besides work and his well-fortified family home. Four of his fellow CSI squad members have been killed since the war for control of Juárez began in earnest, and one more dies during the film. His boss quits suddenly and leaves town, after first being accused of corruption by an informer and then receiving a cartel death threat. Soto himself struggles to resist the obvious conclusion that his horrific work – in one scene, he helps extract charred bodies from a burned pickup, an image I will not soon forget – has no real purpose, since most of the killings are never investigated further, let alone solved.

Meanwhile, when Edgar Quintero finally gets to visit the unprepossessing subtropical sprawl of Culiacán, along with its famous graveyard, he’s bursting with pride, like an Elvis fan making his first pilgrimage to Graceland. He presumably feels that he’s becoming more Mexican, but he never seems more American than at that moment, seeking authenticity in an ancestral homeland much as Irish-Americans fly across the ocean to play golf and kiss the Blarney Stone. You can feel Schwarz’s film bouncing between wonderment and disapproval when it comes to the fascinating world of narcocorrido culture, but he’s smart enough not to lecture those who record or consume them. To me the whole thing looks like the same old, same old: Quintero and El Komander are theatrical performers who offer a consumer-friendly version of antisocial rebellion, set to the oddly ebullient polka rhythms of norteño music. They aren’t responsible for the Mexican drug wars, any more than Ice Cube was responsible for the L.A. gang wars of the ‘80s. (Of course the efforts by various Mexican localities to ban narcocorrido bands or keep them off the radio has only added to the music’s outlaw allure.)

“Narco Cultura” shows us two nations locked in an expensive and destructive war whose only winners are the politicians, police chiefs and drug lords, and whose losers lie in marble tombs and paupers’ graves all over Mexico. It’s a valuable corrective to the neoliberal counterattack that’s now under way, including an ecstatic New York Times article this week about the growing automotive industry in the central state of Guanajuato, where “a new Mexico has begun to emerge,” based on “the imported meritocracy of international business.” I think what that means in plain English, however, is a bunch of non-union, $4-an-hour factory jobs that would once have gone to higher-wage workers north of the border.

Keep reading the article, and its fulsome tone gradually evaporates. The “young, upwardly mobile middle class” of Mexico (mentioned only in a photo caption) remains largely imaginary; nearly half the population remains below the poverty line; crime and corruption remain endemic; and the dysfunctional relationship with the United States remains the bedrock basis of the Mexican economy. Maybe shiny new Pirelli and Volkswagen plants are Mexico’s future – the country’s dubious record on labor laws and environmental regulations is never discussed – but the cheerful bluster of the narcocorrido, and the dreadful silence of the Culiacan cemetery, are its now.