The history of the left-right divide: A centuries-old argument defines our politics, and offers a way forward

The modern divide between liberals and conservatives dates back to Burke and Paine. But there's also common ground 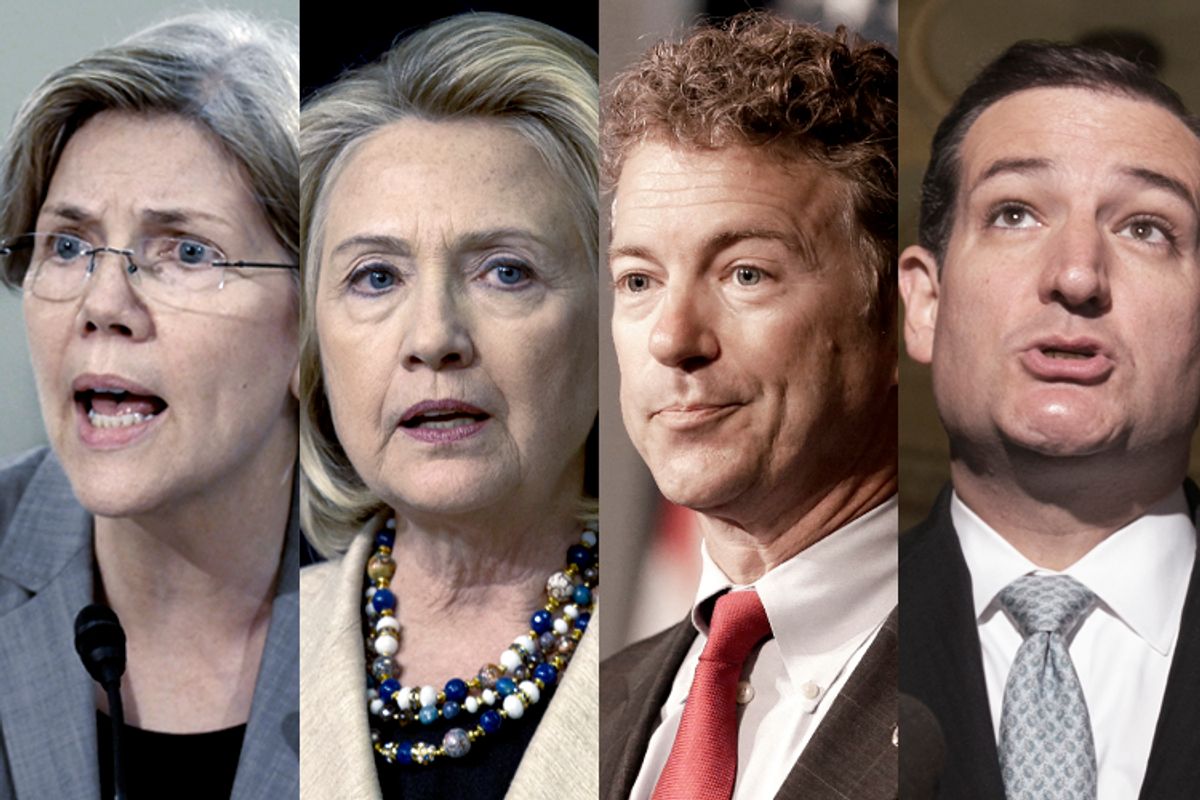 Excerpted from "The Great Debate: Edmund Burke, Thomas Paine and the Birth of Right and Left"

Edmund Burke and Thomas Paine's exceptional concerns about their legacies should not surprise us. They were right to assume that their names and their words, if not their mortal remains, would not be left to rest but would continue to play key roles in the great debate they had helped launch. Assorted radical leaders the world over laid claim to the legacy of Thomas Paine, as did the mainstream labor and progressive movements in the Anglo-American world. Conservative cultural and political movements have laid claim to Edmund Burke’s name and ideas.

Ironically, our understanding of the Burke-Paine debate has actually suffered some from such persistent political attention to both men. The revolutionaries who adopted Paine as their own would too often infuse his historical memory with socialist sensibilities that would have been largely foreign to Paine himself. And a great deal of the commentary (and even the scholarship) regarding Burke, particularly over the past century, has seemed to want to make him (even) more temperamentally conservative than he was.

Paine’s role in the American Revolution, for instance, has caused some American conservatives to give him a serious look and to emphasize elements of his worldview they find agreeable. No less an icon of the American right than Ronald Reagan accepted the Republican Party’s nomination for president in 1980 by reminding his supporters of Paine’s call for transforming failed governing institutions.

Burke’s emphasis on gradualism, meanwhile, has appealed to some contemporary liberals eager to resist dramatic transformations of the welfare state. No less an icon of the American left than Barack Obama has reportedly described himself as a Burkean eager to avoid sudden change.

By considering the arguments as each man first made them, and not as assorted partisans across two centuries have sought to use them, we can see how the worldviews Burke and Paine laid out still describe two broad and fundamental dispositions toward political life and political change in our liberal age.

The tension between those two dispositions comes down to some very basic questions: Should our society be made to answer to the demands of stark and abstract commitments to ideals like social equality or to the patterns of its own concrete political traditions and foundations? Should the citizen’s relationship to his society be defined above all by the individual right of free choice or by a web of obligations and conventions not entirely of our own choosing? Are great public problems best addressed through institutions designed to apply the explicit technical knowledge of experts or by those designed to channel the implicit social knowledge of the community?

Our answers will tend to shape how we think about particular political questions. Do we want to fix our health-care system by empowering expert panels armed with the latest effectiveness data to manage the system from the center or by arranging economic incentives to channel consumer knowledge and preferences and address some of the system’s discrete problems? Do we want to alleviate poverty through large national programs that use public dollars to supplement the incomes of the poor or through efforts to build on the social infrastructure of local civil-society institutions to help the poor build the skills and habits to rise?  People’s answers to such questions likely fall into a pattern. And the answers depend not only on our opinion of the state of our particular society at this moment but also on our assumptions about how much knowledge and power social reformers can really expect to have, and of what sort.

These possibilities suggest two rather different sorts of liberal politics: a politics of vigorous progress toward an ideal goal or a politics of preservation and perfection of a precious inheritance. They suggest, in other words, a progressive liberalism and a conservative liberalism.

The two parties to our political debates still very often answer to these general descriptions. But of course, they do not answer to them perfectly or quite consistently.

The fundamental utopian goal at the core of Paine’s thinking—the goal of liberating the individual from the constraints of the obligations imposed upon him by his time, his place, and his relations to others—remains essential to the left in America. But the failure of Enlightenment-liberal principles and the institutions built upon them to deliver on that bold ambition and therefore on Paine’s hopes of eradicating prejudice, poverty, and war seemed to force the left into a choice between the natural-rights theories that Paine thought would offer means of attaining his goal and the goal itself. In time, the utopian goal was given preference, and a vision of the state as a direct provider of basic necessities and largely unencumbered by the restraints of Paine’s Enlightenment liberalism arose to advance it.

We can begin to discern the earliest roots of this way of thinking in Paine’s own later revolutionary writings, when he proposes a primordial welfare state. But it advanced a fair bit from Paine’s views as over time, some American progressives, influenced by European social-democratic thinking, came to believe in an assertive national government. They thought such a government could both provide some material benefits and clear away some of the social and civic institutions that stood between the individual and the state (institutions that they considered, as Paine did, carriers of backwardness and prejudice).

Today’s left plainly exhibits this combination of material collectivism and moral individualism. The role it affords to the government and its links to European social thought might at first suggest that this attitude leans toward communitarianism. But its American form is actually a radical form of individualism, moved by much the same passion for justice that Paine had and by much the same desire to free people of the fetters of tradition, religion, and the moral or social expectations of those around them.

The deep commitment to generational continuity and to the institutions of implicit social knowledge that we have found at the core of Burke’s thought remains essential to today’s American right, meanwhile. But as Burke himself noted, different societies form such institutions differently, and Americans in particular have always been “men of free character and spirit” to an exceptional degree. This, and the simple fact that American conservatives are conserving a political tradition begun in a revolution (even if it was not as radical a revolution as Paine insists), has long made the American right more inclined both to resort to theory and to appeal to individualism than Burke was. And the two tendencies are connected: The theory of American political thought most often and most readily at hand for today’s conservatives is an adaptation of the very same natural-rights theories that Paine, Jefferson, and other Enlightenment-liberal founders of America had championed, but which the left eventually abandoned.

The tradition of conservative liberalism—the gradual accumulation of practices and institutions of freedom and order that Burke celebrated as the English constitution and that in many important respects the American revolution sought to preserve (not to reject) on this side of the Atlantic—has only rarely been articulated in American terms. For this reason, it is not often heard on the lips of today’s conservatives.

And yet, this very same conservative liberalism is very frequently the vision they pursue in practice. It is the vision conservatives advance when they defend traditional social institutions and the family, seek to make our culture more hospitable to children, and rail against attempts at technocratic expert government. It is the vision they uphold when they insist on an allegiance to our forefathers’ constitutional forms, warn of the dangers of burdening our children with debt to fund our own consumption, or insist that the sheer scope and ambition of our government makes it untenable.

Today’s left, therefore, shares a great portion of Paine’s basic disposition, but seeks to liberate the individual in a rather less quixotic and more technocratic way than Paine did, if also in a way that lacks his grounding in principle and natural right. Thus today’s liberals are left philosophically adrift and far too open to the cold logic of utilitarianism—they could learn from Paine’s insistence on limits to the use of power and the role of government. Today’s right, meanwhile, shares a great deal of Burke’s basic disposition, but seeks to protect our cultural inheritance in a less aristocratic and (naturally, for Americans) more populist way than he did, if also in a way that lacks his emphasis on community and on the sentiments. Today’s conservatives are thus too rhetorically strident and far too open to the siren song of hyperindividualism, and they generally lack a nonradical theory of the liberal society. They could benefit by adopting Burke’s focus on the social character of man, from Burke’s thoroughgoing gradualism, and from his innovative liberal alternative to Enlightenment radicalism.

Excerpted from "The Great Debate: Edmund Burke, Thomas Paine and the Birth of Right and Left" by Yuval Levin. Published by Basic Books, a member of the Perseus Books Group. Copyright © 2013 by Yuval Levin. Reprinted with permission of the publisher and authors. All rights reserved.