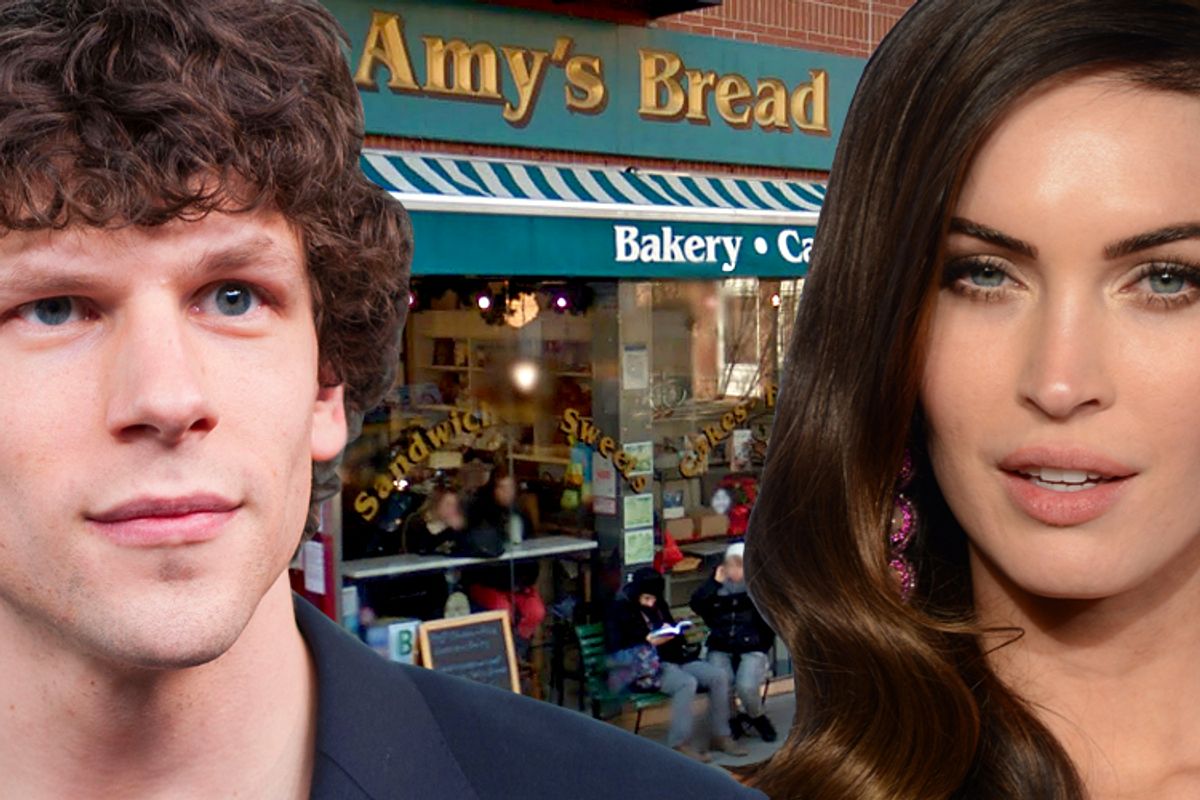 With a surprise midday Monday march on management, employees are making public allegations of abuse at the hands of an organic bread company that claims Meg Ryan, Megan Fox and Whoopi Goldberg as customers. The company’s breads are sold by retailers including Whole Foods, Dean and Deluca, and Zabar’s, and at its retail locations in Manhattan; according to an August 2013 internal newsletter, "The Social Network" star Jesse Eisenberg's "Amy Bread favorite"  is "our daily pizza and a slice of our Yellow cake with Pink frosting."

“The company has a beautiful and great image … We are the source of that image,” said Ana Rico, an overnight cleaning worker at the company, Amy’s Bread. “We put out work hands on it, our sweat, our time.” She said that comes at a cost: “I’m in pain all the time.” After months of organizing in secret, Rico and other employees and activists are today delivering a petition to the company calling for a living wage, affordable healthcare and respect at work. Their campaign is backed by the non-union labor group Brandworkers and the allied union the Industrial Workers of the World.

Reached by phone Monday morning, Amy's Bread said founder/owner Amy Scherber was not immediately available to comment. Last year the company opened a 33,000-square-foot factory in Queens, where Brandworkers says about a hundred workers produce all of its bread, and with it over a million dollars in monthly revenue. The company website touts: “We use traditional European methods, and shape every loaf by hand”; “using only natural ingredients, with no artificial additives”; “we use only ‘green’ cleaning products”; and “We believe that the best bread and pastries are made in the Old World way – by hand and enjoyed within hours of being freshly baked!” And it notes that “Our loyal employees have made our success possible.”

But loyalty has its limits. “Every time that I get home, I have to take pills and use creams” for pain, said Rico. She blamed that pain in part on the company’s alleged months-long failure to replace a machine for washing trays, leaving her to scrub 200 clean by hand each night, in “really hot water” (with an ecologically friendly degreaser), along with other duties like vacuuming. Rico told Salon she’d often worked an hour or two past the 4 a.m. end of her shift, but had been told by a manager they were “not allowed to pay overtime.”

“I think I’m developing some sort of arthritis in my hands,” said Rico, but “right now I don’t have affordable health insurance, so I’m kind of scared going to a private office.” She said the company’s insurance plan would cost “about half of my check” given her wage of $10.50 an hour after one year on the job. Rico also alleged repeat disrespect by Amy’s Bread management, including favoritism that extended to which workers managers brought water to while they worked. She said that when she broke a toe at home, management discouraged her from taking time off, and refused to make changes to her work duties even though she was working with a cast on her foot.

An Amy’s Bread baker, who asked not to be identified due to fears of retaliation, made similar allegations. He said the need to work quickly and move repeatedly between very hot ovens and very cold freezers (“without jackets”) has caused him to throw out his back and get frequent colds. He said the smoke from cleaning burned dough out of ovens “causes my eyes to burn. And they frequently get very red, and my nose bleeds as well. And I have a lot of pain in my throat as well, and I have muscle pains as well, and especially pain in my hands and wrist.” Because the company wouldn’t buy proof boxes for the bread to rise in, charged the baker, “In order to produce the high-quality bread, we need to often turn off the ventilation in our area.”

The baker told Salon his children were on state health insurance because the Amy’s Bread plan would have cost $900 every other week. When workers asked management about overtime they hadn’t been paid for, he said, “they would say it was paid by day”; he added that since then the company has started paying him by the hour, but under the new policy he’s paid less overall, and still hasn’t been compensated for past unpaid overtime. “Behind everything that’s nice and pretty,” he said, “there’s something people don’t know.” Brandworkers organizers also told Salon they’ve heard from workers about a manager who mocked a worker for going to the bathroom by asking, “Do we need to give you diapers,” and laughed about another worker who cried over being fired.

Unlike most U.S. union efforts, Brandworkers and the IWW are not seeking formal union recognition from Amy’s Bread. Instead, they hope to transform the company through worker activism and public pressure without collective bargaining. Brandworkers director Daniel Gross told Salon that labor groups’ efforts to raise standards without collective bargaining have often amounted to “amazing lightning strike campaigns” that “win tremendous gains at a point in time, and then that’s it,” as they prove unable to secure more than getting companies to actually pay the minimum wage, or passing “a piece of legislation that may have a marginal effect on what work looks like every day.” But he said Brandworkers sought to blend such efforts’ “dynamism” and “the real authentic openness to community, the durable connection we have with our bases that traditional unions still haven’t really been able to capture,” with the kind of concrete gains won by more standard U.S. union campaigns, “and how enduring those gains are.” Along with improvements to wages and benefits, Brandworkers is demanding Amy’s Bread eschew efforts to discourage workers from organizing around their demands.

As I’ve reported, the past two decades have seen explosive growth in the number of labor groups trying to organize and mobilize workers without collective bargaining; those efforts have secured health insurance for New York taxi drivers and overtime protections for domestic workers, but face many of the same challenges as many embattled U.S. unions, as well as others of their own. Gross, a founding member of the IWW’s Starbucks Worker Union, said that effort had proven “we could attract our co-workers to a non-traditional model,” and win improvements like getting MLK Day off or getting rid of bad managers, but “in the last 10 years we haven’t achieved what we’ve needed to achieve” in terms of scale or endurance over time. "I mean, there's no question about that." Drawing on pre-New Deal forms of unionism, said Gross, "that's the hypothesis we're testing: Can we build a base that endures?"