Give Joe Scarborough a tissue!: D.C. pundits horrified at rudeness of "nuclear option"

Poor centrists: By allowing the majority to govern, Harry Reid made a broken Congress even more broken, they sniff 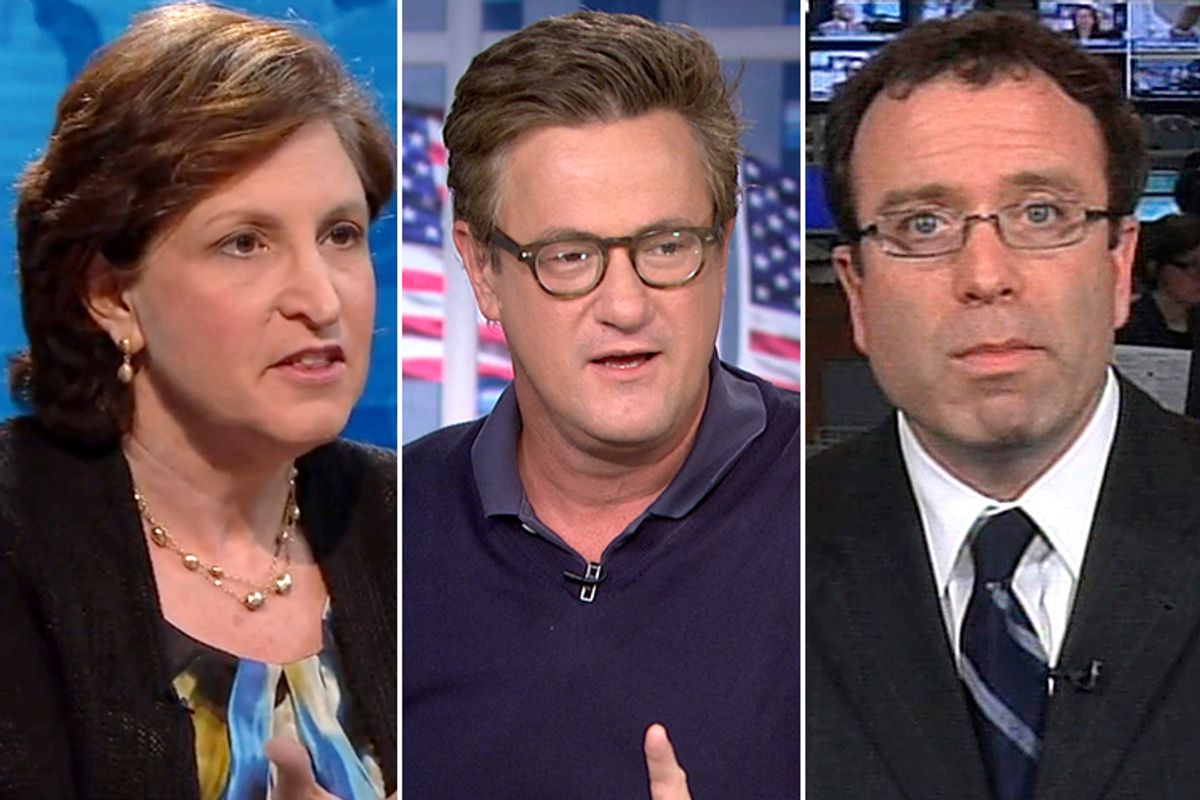 Harry Reid, you may have heard lately, invoked "the nuclear option," and eliminated the Senate's much-abused 60-vote threshold for executive appointments and judges, the Supreme Court exempted. The response from a certain breed of pundit has been a sort of resigned sadness. "Oh, sure, it seems like a reasonable and justified response to unprecedented obstruction," these pundits sigh, "but what a tragedy, for America, that this not-actually-that-old tradition of allowing a legislative minority to block all executive appointments and nominations for no reason has to end." Three separate Washington Post columnists essentially wrote exactly this column.

Ruth Marcus' is perhaps most representative. It begins by explaining, with admirable clarity, exactly why the rules change was made -- the previous filibuster deal was supposed to save the tactic for "extraordinary circumstance," and Republicans had clearly and repeatedly violated that agreement -- and it concedes that the Senate wasn't functioning before the change:

And the argument that deploying the “nuclear option” to change the rules by majority vote will “break” the Senate has long lost its persuasive force. The Senate is broken. It can’t get much worse.

So, that's it, column over, right? No. The Democrats went too far! And they will regret it.

Judges are different, and this is where the Democrats erred. Their move — unlike previous proposals — eliminated the filibuster except for Supreme Court nominees. The simple reason for subjecting judicial nominees to a higher hurdle for approval: lifetime tenure.

This is not to argue that filibusters should be routine or that Republicans were justified in the frequent deployment of a tactic they once denounced. But there are circumstances, even outside the context of the Supreme Court, in which a judicial nominee might be so outside the mainstream or otherwise unqualified that filibustering would be justified.

I actually sort of agree, in theory, that if we're going to have a Senate -- which we shouldn't, but we do -- that is wildly unrepresentative of the nation's actual population, then the one instance in which a filibuster could be justified is for lifetime judicial nominations, because while a law can be overturned by a future Congress, a judge is quite hard to unseat. So, theoretically, a minority of senators representing a majority of the population ought to have the ability to block unacceptable judges. But the solution to this problem is probably not "keep the filibuster in place," but rather "have judges serve terms, at which point they must be renominated or retire." There, problem solved, someone get on that.

Still, even if you think that filibusters ought to be preserved for judges, if not for legislation, then what, exactly, is the solution to the problem Marcus names in that passage? Filibusters had become routine. Republicans openly announced their intention to block Obama from appointing judges to the D.C. Circuit Court, in order to preserve a conservative majority. A previous "filibuster deal" accomplished nothing. It even seems like Republicans didn't take the threat of the nuclear option seriously enough to allow it to be used as a bargaining chip. Should Democrats have preserved the filibuster -- crippling the courts -- in order to protect the courts?

Marcus has a troubling prediction for what this will lead to:

Even assuming that line holds, eliminating the possibility of filibustering lower-court nominees will fundamentally change the calculus of judicial appointments. Presidents will understand that in picking judges they have to count only to 50, which will embolden them to press the envelope, ideologically and otherwise.

Republicans will be empowered to pick more conservative judges, Democrats more liberal ones.

OK, but, the courts are already politicized. Republicans nominate the most conservative candidates possible. There is an incentive to pick people like John Roberts -- young, reliably right-wing, and with a record just sketchy enough to avoid tough questions about hot-button issues, despite everyone clearly knowing where he stands. Democrats haven't yet begun picking judges as liberal as Republican judges are conservative, but that's because of the Democratic preference for moderation and consensus, not because of the 60-vote threshold.

It's easy to agree with Marcus' line that "the filibuster should be a break-in-case-of-emergency tool for judicial nominees," but that's not how it has existed for years now. There's no way to retain that usage that doesn't also enable exactly what Republicans have been doing since Obama took office.

The same day the Washington Post ran Marcus' column, it also ran an unsigned editorial making essentially the same arguments, and even with the same admission that Democrats basically had good reason: "The Democratic majority was justified in its grievance but not in its rash action," the editorial board writes. So, then, what were they supposed to do?

Dana Milbank, too, got in on the action. "If Congress wasn’t broken before," he writes, "it certainly is now." First, the requisite part where the author explains that Democrats were fully justified in what they did before saying it was still a grave mistake:

Democrats were fully justified in stripping Republicans of their right to filibuster President Obama’s nominees — yet they will come to deeply regret what they have done.

And the Senate in 2013 is hardly a healthy institution. Yet it has achieved far more than the House —passing bipartisan immigration legislation and a farm bill and working out deals to avoid default and to end the federal government shutdown — largely because, until Thursday, Senate rules required the majority party to win votes from the minority.

Then Milbank gets his history wrong, or at least presents it misleadingly:

The word “historic” is often tossed around in Washington, but this change ends a tradition dating to the earliest days of the republic. For the nation’s first 118 years, there were no limits on debate in the Senate. After 1917, cutting off debate, or reaching “cloture,” required a two-thirds majority. In 1975, that threshold was reduced to 60 of 100 votes. Even that lower minimum required lawmakers to cooperate with each other.

First, Milbank has just shown that the Senate changes its cloture rules all the time, and the republic has not yet crumbled as a result. Second, no, the tradition of "60 votes being required to pass all legislation and confirm all judges and appointments" does not remotely date back to the earliest days of the republic. Cloture votes have skyrocketed only in the last few years. The filibuster was created accidentally, used hardly ever in the 19th century and only normalized in the middle of the 20th century. The 1975 rules changes were designed to curtail it, and they had, eventually, the opposite effect.

The Washington Post's scandalized responses to the idiotically nicknamed "nuclear option" are best for understanding how moderate, elite Washington views this decision. The right, predictably, is a bit disingenuously pissed about it, though they understand how this will make their job easier the next time they hold the Senate. (The Wall Street Journal editorial board's response is pretty classic. "Today's Democrats have grown up in the Saul Alinsky tradition, and on Thursday they proved it with a partisan vote to break the Senate filibuster rule for confirming judges and executive-branch nominees. " Again, this is the Wall Street Journal, not the Blaze.)

But the clearest howl of rage that greeted Reid's decision comes, of course, from Joe Scarborough, a veteran of the legislative body that eliminated the filibuster in the 19th century. Scarborough says it's an unconstitutional power grab by the president, somehow.

Health care reform itself was passed by blowing up the filibuster. They couldn't go regular order in the Senate. So they blew it up to get this unpopular health care reform bill. The president over the past year has been unilaterally making one change after another without any approval from the United States Congress. Howard Dean even coming on this show suggesting he may not have the constitutional right to do that. And now the very judges who will be determining whether what he's doing and these changes, whether it's Constitutional or not, they are only going to get through by a nuclear option.

You look at the history of this presidency and look specifically how he has handled the messy rules of the Senate; I think historians will find him to be a breathtaking grab of power.

First of all, Harry Reid did this, not the president. Secondly, healthcare reform passed with 60 votes, making the specific procedural maneuvering involved in that vote irrelevant to this discussion.

But really, this happened because a majority of senators voted for it to happen. The president didn't dissolve the Senate or unilaterally change its rules. Scarborough goes on to use the "you'll regret it when the Republicans are in charge again" line, but there was absolutely nothing stopping Republicans from doing this anyway, and most people at this point assume they would no matter what Democrats did while in the majority.

The "nuclear option" wasn't remotely scandalous. The Senate operates according to rules senators in each Congress agree to, not stone tablets from a higher power. The Constitution doesn't lay out the Senate rules of order -- indeed, the filibuster was not something the Founders intended to allow -- and the Senate has changed its filibuster rules numerous times throughout its history. The "norms" and "traditions" that were supposed to preserve the 60-vote threshold for only the important stuff had already been blown up by Republicans. The right people, including the Washington Post editors, tut-tutted the GOP for its actions, but the only way to actually stop it was killing the filibuster, because the Republican Party could not possibly care less about opprobrium from Ruth Marcus and Dana Milbank and even Joe Scarborough, who brags about how all the important people watch his show every morning. There wasn't any reason, besides an attachment to a mythical history of the Senate, to keep the filibuster.