The politics of Rihanna’s hair: Her AMA do was a powerful form of resistance

In an award show celebrating the co-optation of black musical forms, a star's hairstyle was an important statement 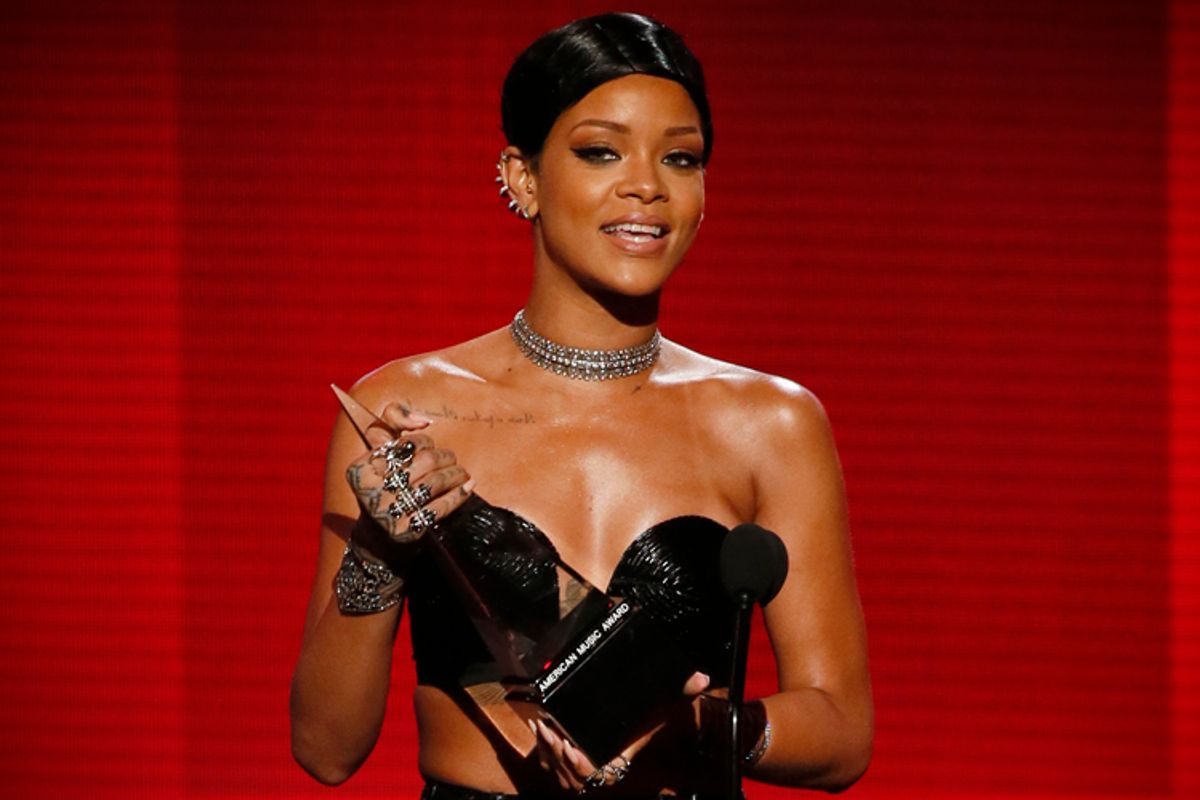 Two nights ago, my mouth fell open, when I looked up to see Rihanna rocking a doobie at the American Music Awards.

What’s a doobie? In the South, we just call it a wrap. It is a particular way that black women with straightened hair style their hair by combing and brushing it around the base and crown of the head before bed in order to maintain the style for the next day.

During the 10 years that I wore a relaxer, wrapping my hair and securing the wrap (or doobie) with a scarf or bobby pins or a combination of the two was a nightly ritual. But what you never did -- with any level of propriety anyway — was wear your wrap out in public.

I mean, sure, you could get away with it on a quick run to the corner store. But in general, once the hair is wrapped, you are in for the night and the style is not for public consumption.

So when Rihanna showed up at the AMAs rocking just such a style, but adorned with fancy bejeweled bobby pins, I registered it immediately as ratchetness.

Ratchet, because it wreaks of impropriety, and rejects the unstated rules of black women’s hair. There are certain things that black women don’t do out in public regarding hair: We don’t wear rollers outside (that is the ultimate act of ratchet-ghetto behavior), we don’t wear doobies outside, and we don’t wear ratty headscarves outside.  If you do don a headscarf, you better tie it up in an intricate way and make it look Afrocentric – “cultural,” you know.

Rihanna took no such pains with her appearance, defying all the rules at this year’s awards. I promptly wondered what it meant. She very well knows that black girls know that a doobie ain’t a style – it’s a pre-style, no matter how pretty the bobby pins are that you put in it.

If you don’t unwrap your hair, then basically you have made very little effort to get all donned up for the show. Exposing people to your doobie either means you know them very well, or know them so little that you couldn’t care less what they think.

The scholar in me is tempted to read this homage to ratchetry as a kind of subtle resistance to the pomp and circumstance of these awards. I feel emboldened in that reading by the blatant whitewashing of black culture that went on at the AMAs.

The AMAs haven't been particularly good on this point in a long time, which is why it is not one of the major shows that I watch. But last night, Justin Timberlake won for best soul/R&B album in a category that featured him, Robin Thicke and Rihanna, and Macklemore won for best hip-hop album, just as he did at the VMAs.

When Sarah Silverman made a quip about the category being dominated by two white guys and a Caribbean artist, Justin, upon winning, remarked that Silverman’s remarks constituted the first time that he had ever felt “racially profiled.”

Race analysis #FAIL, JT. Please don’t make it hard for me to like your music. It’s already hard to admit I like it, since your musical career has relied on the appropriation of a black sound and the requisite awarding of cookies because you are a white boy who does it well.

I know some folks consider it the triumph of multicultural America that white artists are now winning for making music in categories traditionally reserved for black artists. I am far less optimistic about this American post-racial project, and wonder if the dominance of Macklemore and Justin Timberlake and Robin Thicke signal yet two more black musical forms that are about to go the way of rock 'n' roll.

Given this kind of cultural context, it matters when black cultural resistance shows up in ways largely illegible to white audiences. Watching my friends spend the day trying to explain what a doobie is on Twitter to white people who kept asking if it is marijuana is hilarious.

So whatever Rihanna’s intent, I do read her choice to rock an indoor do as a form of resistance to the massive co-optation of black culture. As the artist from whom Rihanna apparently took inspiration to make this style public sees it, the adorned doobie is like a ghetto crown of sorts, a kind of attitude that accompanies freshly “done” hair, which says, “I look fly and you can’t tell me nothing.”

Hair for black women is a thing that remains deeply cultural despite attempts to co-opt it on occasion. It signals a whole set of cultural practices that largely still fly under the radar of white America.

So the AMAs gave Rihanna their first ever ICON Award last night. But from my purview, she reframed the terms of her iconicity, to locate herself firmly within black Diasporic culture rather than an iconic “American” project.

Doobie wraps are one of the enduring signifiers of black girl vernacular and the other night, despite an awards show that would have us believe that white folks can do everything (musically) that black folks can do, Rihanna managed to re-assert sui generis aspects of black culture and expose the dubiousness of that assertion.